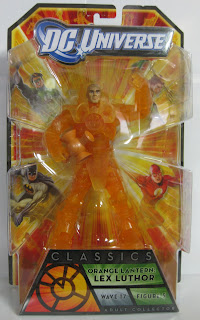 Lil’ Troublemaker Series Part 2!
I got a huge box of awesome (mostly) from BigBadToyStore the other day. There was a lot to go through and take pictures of and Lil’ Troublemaker wanted to help, so I let him pick out what order we took the pictures in and opened the figures. That’s the order that you’re reading all of these in now.
Luthor and Sinestro Corps Scarecrow are the only figures I ordered from Wave 17. I had Star Sapphire Wonder Woman preordered, but I finally decided she looked like shit and cancelled.
Luthor came the other day along with some other stuff, but Scarecrow still hasn’t shown up at BigBadToyStore for some reason.
The second I saw Orange Lantern Lex Luthor in the comics I wanted a figure. I was saved from having to buy the DC Direct version when Mattel announced their seventeenth wave of DC Universe Classics. I love the concept of the Orange Lantern – being a greedy toy monger myself – and Lex Luthor is one of my all-time favorite villains. I live to see him crush Superman and there are certain aspects of his character I identify with one hundred percent. I’m also a sucker for see-through toys.

I was fully expecting nothing more than a translucent orange variant of the standard Armored Luthor figure we’ve seen a couple of times before, probably with a new chest piece. Did Mattel give us more than that? Let’s see… 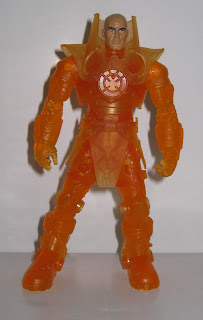 First Glance: Luthor looks exactly like what I said above and that’s fine by me. Well, maybe. Now that I’m thinking about it a different head might have been nice. 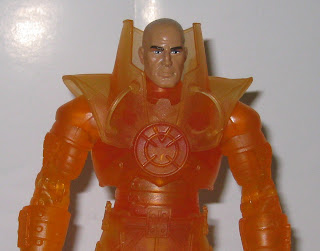 Sculpt: I haven’t taken my older armor Luthor from the Supergirl set down off the shelf in a while, so I’d forgotten how good that figure actually is.
This one sports all of the standard DCUC articulation except for the right hand. It doesn’t swivel for some reason. And not in a defective way, in a design way. Since you can see through the arm you can see there’s no mechanism there. An odd choice for a figure that needs to be able to clutch something.
This Luthor has not only a new chest piece configured to include the Orange Lantern symbol, but also a new skirt that doesn’t restrict leg movement as much as the old one.
The head is a great Luthor likeness. I thought it would be the same one as the other figure, but they I’m pretty sure this is the same head as the Super Powers Luthor from the Gotham City set (I sold that one on eBay). I would have liked a new, crazy head sculpt for this figure, but this is a good Luthor likeness so I can’t complain. 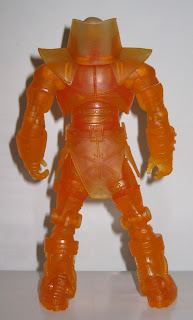 Design: The head has a solid paint job, which is good because I would have had to give Mattel a really hard time if they fucked up eyebrows and skin. The armor is a clear orange, which is wonderful. 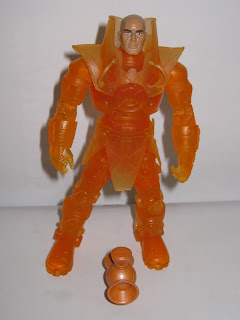 Accessories: Luthor comes with the Orange Lantern. He can hold it okay, but I think maybe Mattel could have figured something out to make the clutching work a little better. Maybe a peg in the palm of the hand or more wrist articulation. I mean, what’s here works – it just could have been better. 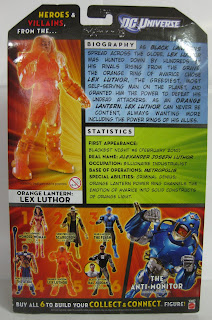 Packaging: The giant DCUC bubble. I think they should change it up again soon. People are pretty accustomed to seeing this design warming pegs now and it probably wouldn’t hurt to freshen things up. If I were Mattel (or a retailer) I’d want something drastically different from the 800 Power Girls every single Walmart has cluttering their toy aisle. 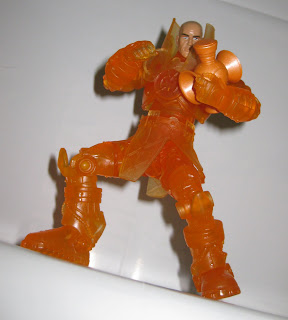 Overall: There are a few small things I would have done differently, but this figure lived up to what I wanted and even surpassed it a bit. Luthor is a worthy entry in the line and a must if you’re a fan of him or the color orange.
4 out of 5
I would imagine Series 17 will be showing up at retail soon. That is, of course, if you don’t live in Georgia. Georgians probably won’t see the Lantern Wave until February.
Until next time, stay creepy
-Phantom
Posted by Phantom Troublemaker at 11:00:00 AM