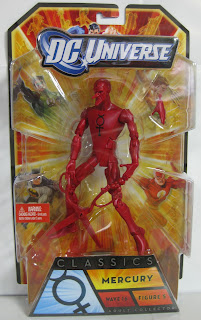 I’ve been avoiding the Metal Men. I like the characters and I read something a few years ago that made me really like them (though I can’t remember what it was). Their appearance on The Brave and the Bold didn’t hurt, either. The backup story that ran in something a couple of years ago did put me off a bit – it seemed unnecessarily grim and mean-spirited somehow, entirely unlike the whimsical stories I had previously read.
But up until recently the Metal Men had not been part of a Build-A-Figure I had to have. On top of that, I was under the mistaken impression that their various attachments – saw blades, wrenches, whatever – were part of the figures and not accessories.

A closer look at Iron made me realize the figures did have regular hands and I recently decided I had to have both Bane and a Classic Robin, so I bought Mercury when I found him alongside Jonah Hex and Robin (and later picked up Iron – still looking for a Gold). 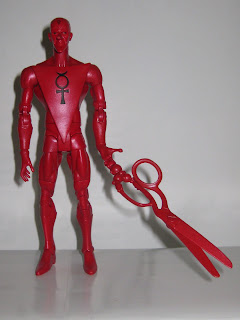 First Glance: The Metal Men really are neat-looking figures. Mercury is an awesome shade of metallic red and stands out from the rest of the DC Universe Classics while still looking like part of the line. For some odd reason he makes me wish I’d bought a Robot Man. 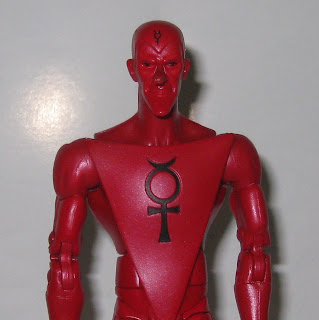 Sculpt: Mercury has a skinny DCUC body with all the articulation we’ve come to know and… accept. It’s good and all, but now that double joints have been introduced and we’ve also had so many issues with stuck points of articulation; well – it’s kind of a mixed bag right now. Mercury does sport double-jointed elbows, so that's nothing but good.
Mercury’s head is fantastic and the face looks suitably angry for this hot-headed robot. The neck allows a good range of movement compared to some other releases. He has interchangeable left hands. One is a giant scissor and the other is a more standard hand. I haven’t switched them out because I’ve read too many stories about one or the other breaking. His right and left wrists are both ball-jointed, which facilitates a number of fun poses with the scissors. I like the idea that he uses his right hand to operate them rather than just using them independently.
The tunic thing attached to his body looks nice and is about as good as Mattel could be expected to do without actually tooling a new torso. 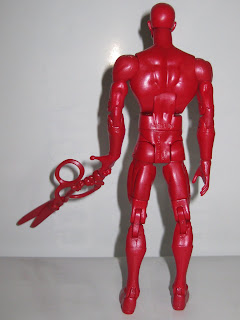 Design: Not much to say here. The color of red Mattel chose is fantastic and the small amount of painted detail looks good and is clean. 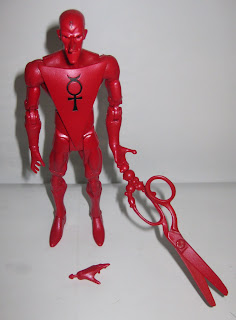 Accessories: Mercury includes those interchangeable left hands. I think they both look good, but I can’t call them a total success if I’m too scared to change them out. I will say that the scissor hand is apparently very sturdy because Lil’ Troublemaker has opened and shut it approximately 5,432 times.
The figure also comes with a piece of the Bane build-a-figure. 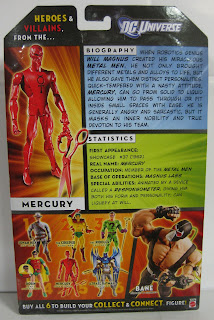 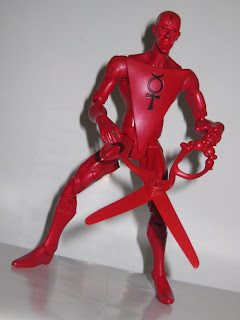 Overall: I’m very happy with this figure and so is my son. He runs around working the scissors yelling, “I’m gonna cut your skin!” and attacking other figures.
I don’t know where they get this stuff.
4 out of 5
I’m not sure it’s fair to deduct a point for presumed fragility, but since Mattel produced the figure I think it is pretty safe to assume the reports are true. It’s like if somebody called you up and said, “Hey, man – the sky’s blue today!”
You just wouldn’t doubt them.
Until next time, stay creepy
-Phantom
Posted by Phantom Troublemaker at 11:00:00 AM