Lil’ Troublemaker Series Part 5!
I got a huge box of awesome (mostly) from BigBadToyStore the other day. There was a lot to go through and take pictures of and Lil’ Troublemaker wanted to help, so I let him pick out what order we took the pictures in and opened the figures. That’s the order that you’re reading all of these in now. 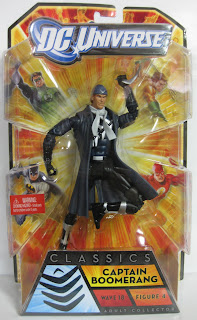 I still haven’t read Geoff Johns’ old run on The Flash with all the Rogues stuff, but I saw enough of this iteration of Captain Boomerang in “Blackest Night” and “Brightest Day” to like the character.
Plus, Lil’ Troublemaker calls him “Captain Booberang” and that’s great. I need to draw that. 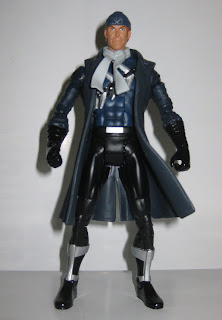 First Glance: I’m not sure why ol’ Digger here looks so much like a sailor, but it works. 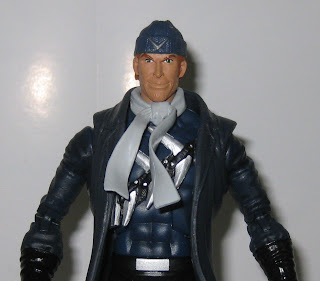 Sculpt: Captain Boomerang has a basic skinny body with boots, jacket arms, gloves and a coat that is separate but probably not removable without an X-acto knife. His boomerang bandolier is built into the coat. I didn’t like that at first, but there’s no reason for it to be otherwise. The boomerangs are built into it.
Digger has great articulation and the coat interferes less than you might think. He’s got the standard DCUC deal, plus double-jointed elbows and knees. His ankles have a somewhat limited range, though.
The details sculpted into this figure are great. From the boots and the gloves to all of the wrinkles in the jacket sleeves to the scarf; Mattel put a lot of work in this figure.
The head sculpt is a dead ringer for the character as he appears in current comics. 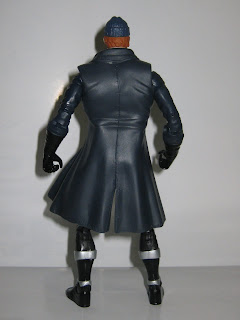 Design: There’s not a whole lot to so here, but what is here is nice to look at. While the character may seem a little dull visually (especially compared to the rest of Series 18), Mattel has used lots of different paints and textures to make Captain Boomerang interesting. His boots and gloves are glossy, his coat is slightly duller and the rest of his clothing has a more natural look. The stubble on his face looks good enough that I thought it might be sculpted at first. The paint is tight on every part of the figure, from the bandolier to the insignia on the cap. 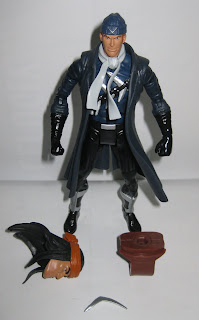 Accessories: This is where Mattel has failed completely. The first problem is that Captain Boomerang only comes with one boomerang that is not permanently attached to his person. Seriously? Give us five of the things. It’s a tiny piece of plastic. Dammit, Mattel. The second problem is that said boomerang is made of rubber. Fucking rubber. And not just any rubber, folks. I’ve used condoms firmer than the stuff this boomerang is made from. And it is secured in the blister tray with a rubber band, ensuring that it is utterly deformed and useless. Way to go, fuckos.
Each figure in the series also comes with a piece of Apache Chief. 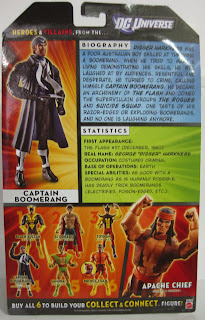 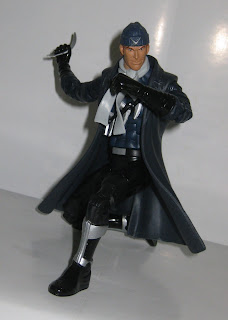 Overall: This is about as good as Captain Boomerang is going to get, barring the possibility that somebody makes one with a boomerang accessory that isn’t limper than Northstar’s wrist.
4 out of 5
I want so badly to take more points off for that damn boomerang, but the rest of the figure is just so good. You know you’re going to buy one. Meanwhile, I’m going to figure out a way to make some decent boomerangs.
Until next time, stay creepy
-Phantom
Posted by Phantom Troublemaker at 11:00:00 AM