Lil’ Troublemaker Series Part 8!
I got a huge box of awesome (mostly) from BigBadToyStore the other day. There was a lot to go through and take pictures of and Lil’ Troublemaker wanted to help, so I let him pick out what order we took the pictures in and opened the figures. That’s the order that you’re reading all of these in now. 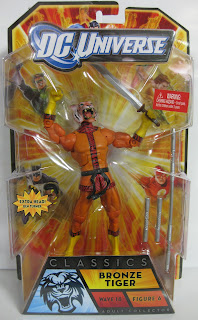 Bronze Tiger was once a bright young man named Jahrud Mahmout. Confined to a wheelchair at an early age, Jahrud liked nothing more than venturing into the expansive backyard of his family home in Pehtal, India. There he would pretend to be a great explorer, using his well-developed imagination to track and photograph the animals of the region – elephants, mongooses, the rare yellow-plumed rat egret and of course; the Bengal tiger.
One day in his explorations, Jahrud ventured too far into the dark jungle behind his home. His father had warned him time and again about the dangers hidden among the massive, lush trees. But Jahrud could not resist the allure of the unknown. Heedless of the obstacles that tried to bar the path of his wheelchair – roots, uneven ground and… leaves. Lots and lots of leaves. Like, you’ve never seen so many leaves.

And just as Jahrud became truly immersed in the shadowy… shadows… there was an ominous rustling from the underbrush. Something was there. Something large – perhaps as large as a man or a really big dog or something. Maybe bigger.
Panicked, Jahrud tried to turn his wheelchair about as quickly as he could. In his fear and haste, he toppled himself to the ground just as the shape burst forth from its place of concealment and fastened its mad, terrifying jaws on the neck of the only son of Timbuk and Pushpa Mahmout.
Jahrud Mahmout screamed as though a large, mysterious thing was biting his neck.
And then realized suddenly that he had been released. As the blood flowed down his chest from the wound, Jahrud finally found the will to focus his gaze on his attacker. He could not believe what crouched before him.
A ninja. More importantly, a were-ninja.
And so he gained the martial arts prowess of the masters, but only when he called upon the sacred name of Ber-Iman Ello to transform into… Bronze Tiger.
I’m just kidding. I have no idea what Bronze Tiger’s background is. I’ve probably read three comics total that he was even in. I guess that story would have been better if it had been a were-tiger. I just sort of thought he already had the tiger head. Let’s get this review over with. 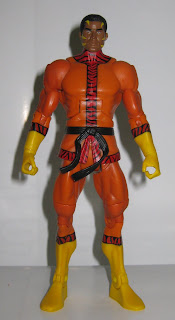 First Glance: Despite my ignorance of the character, Bronze Tiger is one of the Series 18 figures I was most excited about. Actually, this whole series was a pretty big win for me. There wasn’t a single figure I didn’t like; some because of the design, some because of the character.
Bronze Tiger was really cool looking in the Toy Fair photos. He looks about the same in person, but with a staggering (for DCUC) number of accessories. Let’s open this guy up. 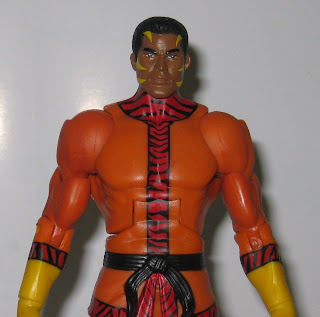 Sculpt: Totally standard DCUC body. I’m a little disappointed we didn’t get double joints on this one, what with him apparently being a martial artist and all.
Bronze Tiger has a piece around his lower abdomen that represents the bottom of a gi and a belt. If you think about it too hard it’s actually kind of weird going along with what are essentially painted-on tights, but it looks fine and – more importantly – it looks like he looks in the comics.
Both heads look very good. The human head is distinctive and the tiger head is exactly the right size. The sculptors managed to strike a nice balance between realism and comic-bookishness.
My figure had no problems with stuck joints or messed-up parts or anything. 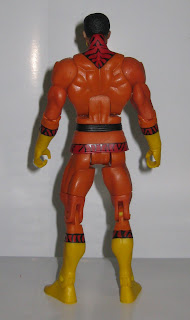 Design: The costume may be painted on, but it is painted on very well. All of the tiger striped trim is very consistent.
The tiger head has a great paint job. The stripes and fur and eyes and everything are all very clean and tight. The only issue is a black spot on the tongue, but it isn’t a huge deal for me. If you’ve ever seen the inside of an animal’s mouth, you know there’s always discoloration like that.
The human head is nicely done, with the war paint being applied evenly and well-balanced. 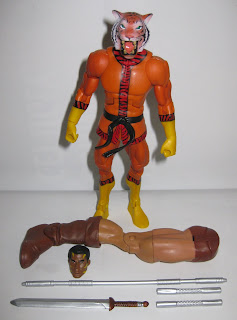 Accessories: SO MANY ACCESSORIES! HOW CAN THIS BE?!? Bronze tiger comes packed with a sword, a staff, an extra head and two of those sticks that Nightwing uses to fight. I used to know the names of those things back when I was way into Ninja Turtles. The sword is too loose in the figure’s hands, but the rest of the weapons fit well.
Each figure in the series also comes with a piece of Apache Chief. 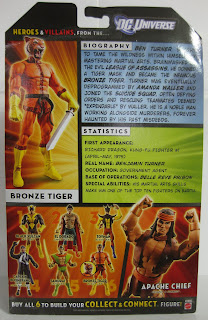 Packaging: The giant DCUC bubble with the character’s biogra… huh. So this guy doesn’t actually have a real tiger head? Like, ever? Overall: I like this figure about as much as I thought I would. Bronze Tiger is sharp-looking and came with more accessories than we’ve come to expect lately. Now I’ve got a bo staff for Robin.
4 out of 5
Double joints would have made sense on this one, other than that I can’t really fault it for anything physically.
I can, however, fault Bronze Tiger for being released before Poison Ivy, Damian Wayne, Arisia, Larfleeze, Atrocitus, Commissioner Gordon, Huntress, Oracle, Hawk and Dove, Jimmy Olsen, Batwoman, Ra’s Al-Ghul and a bunch of others that I could just sit here and type for hours. And Ragman. I really want a Ragman. 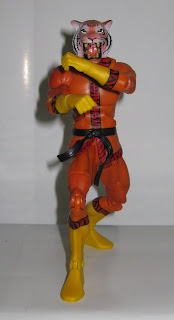 I should also mention that Bronze Tiger is definitely Big Show's favorite comic book character ever.
Until next time, stay creepy
-Phantom
Posted by Phantom Troublemaker at 11:00:00 AM