Lil’ Troublemaker Series Part 6!
I got a huge box of awesome (mostly) from BigBadToyStore the other day. There was a lot to go through and take pictures of and Lil’ Troublemaker wanted to help, so I let him pick out what order we took the pictures in and opened the figures. That’s the order that you’re reading all of these in now. 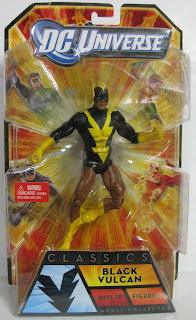 I got most of my thoughts about the Hanna-Barbera-created Super Friends in Friday’s post. All I really have to say today is that I think it’s funny how much MVP’s gear looks like Black Vulcan’s outfit and I never realized it before getting this figure. 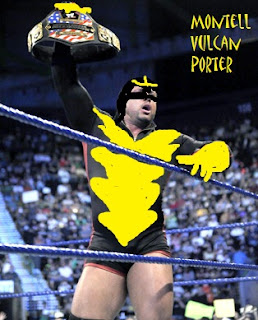 First Glance: Mattel could have made this figure with pants, as that’s how Black Vulcan showed up at first. I’m glad they didn’t. This version is much more iconic. Those little lightning bolt accessories look kind of wimpy, though. 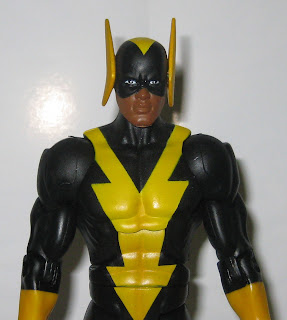 Sculpt: Same old DCUC sculpt. No double joints, but they really aren’t needed.
I love Black Vulcan’s head sculpt. It’s not overly complex, but Mattel managed to give a certain amount of character to a guy who never had all that much. I’ve heard of problems with the little ear things coming off, but mine seem secure.
I also didn’t have any issues with stuck or loose joints. This whole series seems pretty solid, which is amazing given all of the problems with the Bane wave. 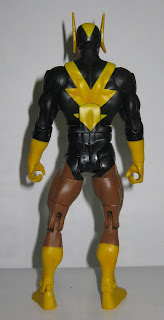 Design: I am shocked that Black Vulcan looks so good. Mattel has not had the best history with dark colors and yellow, but they’ve managed to pull it off this time. The yellows are strong and precise and the blacks don’t have the odd faded look that some of the Sinestro Corps members seem to have. The skin tone looks great and is uniform despite the use of different grades of plastic throughout the figure. 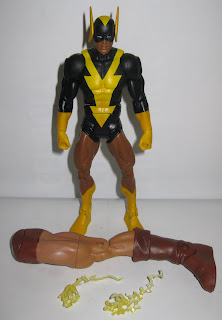 Accessories: Black Vulcan comes with a couple of sissy little lightning bolts made from a very soft plastic. They are supposed to attach to his arms and they do, sort of. I am so, so over this soft plastic and rubber that Mattel is using for accessories and now even body parts. It’s crap. The stuff is too soft to use on action figures. Just wait until I get to Series 16’s Robin. Hoo, boy.
Each Series 18 figure also comes with a piece of Apache Chief. 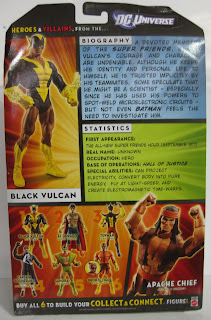 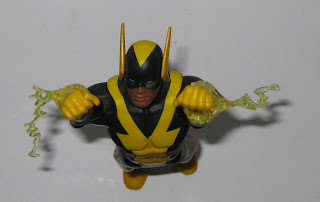 Overall: Aside from the lightning bolts I’m very happy with Black Vulcan. He looks really good and will help Cyborg feel less intimidated on my incredibly white DCUC shelf.
4 out of 5
Mattel did a good job on this guy. If you hate the idea of Super Friends in amongst your comic book characters you’re going to skip him. Otherwise you owe it to yourself to pick one up.
Until next time, stay creepy
-Phantom
Posted by Phantom Troublemaker at 11:00:00 AM