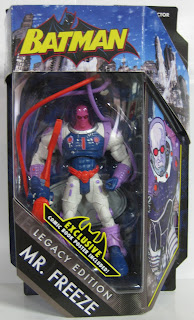 In order to properly celebrate Independence Day, I'm going to be reviewing the DC Universe's most patriotic villain – Mr. Freeze!
I'm kidding, of course. I couldn't come up with anything suitably Americanic (?) for the holiday, but I do have some lovely pictures over on the Facebook page of me enjoying the fruits of our great country's glory. Go check 'em out!
Lil’ Troublemaker Series Part 1!
I got a huge box of awesome (mostly) from BigBadToyStore the other day. There was a lot to go through and take pictures of and Lil’ Troublemaker wanted to help, so I let him pick out what order we took the pictures in and opened the figures. That’s the order that you’re reading all of these in now.
I believe this is the third variation of this particular Mr. Freeze. It first showed up in the DC Superheroes line (I think) in the same series as what is still my favorite Batman figure, an Azrael I recently found for a steal at a local flea market and Scarecrow. Another one got released somewhere along the way and there was a New York Comic Con exclusive as well. This one is meant to represent the Super Powers version of Doctor Victor Fries (wait a minute – why isn’t he called “Dr. Freeze”?) and is visually my favorite due to the totally goofy colors. That doesn’t mean I wouldn’t mind having one in more subtle hues; I just really like a purple Mr. Freeze. Dr. Freeze. Doctor Freeze. Doctor Freezenstein. I like that.
I didn’t order any of the other figures from the Batman Legacy line. I don’t need any more “modern” Batmans and I’m not totally sold on that Joker. I can chance finding him at retail. Same goes for the two-packs. I’ll probably stick with the DC Direct video game figures since I think they’re more likely to consistently devote resources to the line and I didn’t want to pay an online premium for the Movie Masters two-pack. I have to have that Gary Oldman as Gordon, but I can do without the Prototype Batman repack (are the italics enough to convey my disdain for the fact that Prototype Batman is a repack?).

So Doctor Freezenstein arrived the other day along with DCUC Orange Lantern Lex Luthor, DCUC Series 18 and the new Tick figure from Shocker toys. Lil’ Troublemaker helped me determine the order in which I’d open the figures and I’m going to review them in that order as well. He picked Mr. Freeze first; I think mostly because he wanted me to chase him around the house with it yelling in my Arnold Schwarzenegger Mr. Freeze voice. Which I, of course, did.
I also broke down and bought the last three figures from Series 16 the other day. There were two reasons for this: 1) I borrowed Secret Six from Evil and have to have a Bane now and 2) Pictures of an absolutely amazing Dick Sprang/ Brave and the Bold-looking Batman have shown up online. This figure has been (sort of but not really) confirmed for Batman Legacy Series 2 as well as Catman and Batgirl (Barbara Gordon).
But let’s take a look at Mr. Freeze. 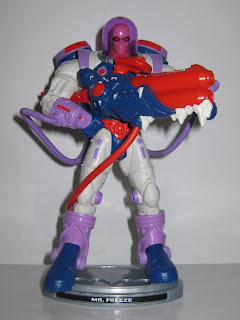 First Glance: I don’t quite understand the pink helmet, but I can appreciate the silliness of it. Otherwise this looks like a pretty cool Mr. Freeze. Heh. That gun and backpack appear to be the same ones that came with the super-old Mr. Freeze from the very first Mattel Batman line, whatever the heck that was called. I still have that Freeze around somewhere. The packaging looks nice, but is probably overly fancy. 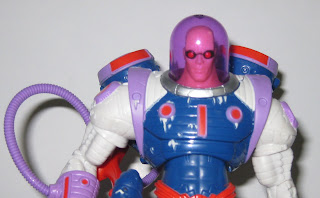 Sculpt: The look of this figure is very reminiscent of the older one I’ve got, but clearly updated. He has ball-jointed shoulders, swivel biceps, thighs, wrists, abdomen and waist. The knees and elbows are pivots and the hips are that standard weird Mattel ball joint analog. The ankles suck. They are pivots, but they’re integrated into the armor in such a way that the connection point for the feet is a thin piece of rubbery plastic on either side. There is a peg that goes from the foot, through the plastic piece and into a grommet. It is a very weak connection point that is just asking to break, especially if the paint app has made one of the feet immobile. Like, say, the right one. I’ve tried running it under alternating water temperatures (which thrilled my son – he loves playing with toys in water) to no avail. I guess the freezer trick is next.
The detail of the figure is very good. We’re all familiar with Freeze’s robot armor by now and this figure looks like that. I’ve gotten to the point where I prefer a more streamlined Freeze, but this one is okay – especially given his paint scheme and intended reference. This Freeze might be just a bit clunky when compared to your other DCUC figures, though. His hands are kind of lumpy and he’s just kind of thick.
Also, I wish the helmet was removable so I could pose his head. You’d think he would be looking in the only direction he can conceivably point that giant gun.
I’m not crazy about the fact that Freeze’s backpack and the connecting hoses are permanently attached to the figure, but at the same time I can’t come up with a reason they shouldn’t be. The older version I had squirted water. This one has the mechanism intact, but I haven’t tested to see if it worked. I didn’t notice it until we had already gone back downstairs after trying to get his stupid right foot to move. 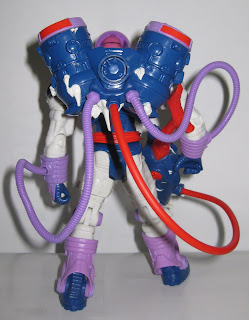 Design: I do like the colors, but I think Mattel could have done a better job with the paint. Just because you’re trying to present something vintage doesn’t mean it has to be painted so simply. There is none of Mattel’s usual shading or detail on this one and this is another factor that contributes to the figure not quite fitting in with the rest of the DCUC. Freeze is honestly pretty lacking. Everything is clean, Mattel just didn’t put any extra effort into making the figure pop. 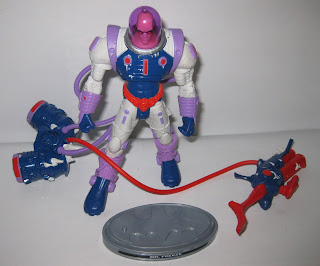 Accessories: I’m not going to count pieces that cannot be separated from the figure as accessories. But I will say that Freeze can hold that big honkin’ gun surprisingly well. The backpack doesn’t fit quite securely into the hole on the back, but it does seem to stay put well enough. Mr. Freeze is so special he gets a stand with his name on it that I'm not going to use because none of my other DCUC figures have stands with their names on them. There's nothing worse than envious, six inch tall metahumans.
There is also a mini poster of a comic cover featuring Mr. Freeze. For some insane reason they chose a modern-era Kelley Jones Mr. Freeze rather than a Silver Age or Super Powers one. You all know how much I love Kelley Jones, but that’s just dumb. 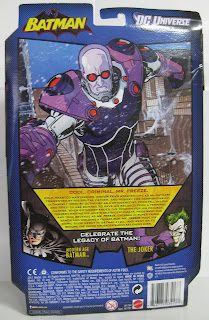 Packaging: The Batman Legacy line has some pretty fancy packaging. It looks very 90’s, but in a good way. I think it will really stand out in stores if these ever actually show up there. 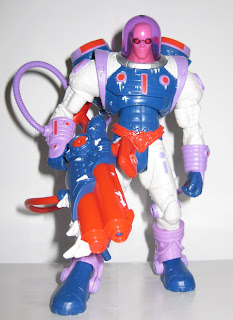 Overall: I just can’t recommend this guy. Not for fifteen bucks or more.
2 out of 5
The foot is bad enough, but when you throw in the clunkiness and general blandness of the design this Freeze just doesn’t work for me. I’m not sure I dislike it enough to sell it at a loss, but I definitely could have lived without it. It’s one of those rare DCUC figures that actually ended up looking worse in person.
Oh, and I know I didn't post a picture of the poster.
1) It's pointless and stupid and most of you are going to throw it away anyway.
2) It's rolled so fucking tightly that you would have to place it under 18 N.I.V. bibles for 40 days and 40 nights to straighten it out enough to take a picture. And I don't have that kind of time.
Until next time, stay creepy
-Phantom
Posted by Phantom Troublemaker at 11:00:00 AM