One Night at the Club – I Got Knocked the Fuck Out 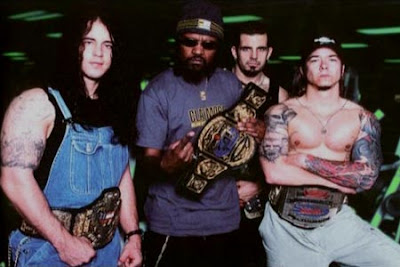 I haven’t written one of these since the MySpace days, though I have reposted them here (bottom of the page). I was inspired to do a little recollection after buying the DCUC Series 16 Robin with the weak ankles. It made me think of Bones from nu-metal band Stuck Mojo.
I worked security at the Masquerade during 1996/97 and got to meet and see a lot of awesome bands, work with some cool people and also meet and see and work with some real assholes. Almost without exception British techno bands were full of absolute cunts, and that’s not a word I use very often. From Prodigy to Orbital to The Orb (whoever the fuck that is); they all left me with long-lasting memories of douchebaggery the likes of which I’ve rarely experienced. That really doesn’t have any bearing on my story, but I like sharing that little factoid any time I can.
There were several different jobs you might have at the club the night of a show. You might be checking IDs at the door, roaming the floor in Hell (the dance club downstairs) or Heaven (where the bands played), or working the stage.

If you were roaming, your job was to keep an eye out for underage drinkers, people using illicit substances (coke, weed) or people being just generally unruly. 99.9% of the time roaming involved nothing more than walking around your area trying to look as ornery as possible. I doubt I was involved in more than three actual fights or altercations the whole time I was employed there. What they said in Fight Club is absolutely true: most people will do anything to avoid a fight. It just didn’t happen that often. So roaming was no big deal. You rarely had to actually do anything and you had the best opportunity to enjoy the bands playing if you were upstairs.
Working the stage was a whole different proposition. The job there is to keep patrons off the stage and to watch the pit for kids who might be getting hurt. It wasn’t a big deal most of the time. Most bands either don’t have a very large following or don’t play the sort of music that incites people to try and get up on stage and either jump back off onto the crowd’s heads or even perhaps assault the band members.
But we had been getting warned about the Stuck Mojo show for a couple of months before it happened.
I wasn’t overly familiar with Stuck Mojo. This was before the music video with Diamond Dallas Page in it, so they weren’t on my radar. I just didn’t believe that there would be enough people there to be a problem. I was so very wrong. And I was also on stage. Any time there was a metal band playing the Powers That Be would schedule the biggest guys to work the stage. Being 6’4” and 230 pounds (or thereabouts – I probably went ten years without weighing myself so I don’t really know) I almost always worked the stage for those shows.
Stuck Mojo’s touring manager wanted to have a little pow-wow with those of us working the stage before the show. This wasn’t entirely unusual. Band managers often felt the need to tell us how to do our jobs and these meetings were usually met with no small amount of restrained hostility. Nobody needed to tell us how to keep drunk rednecks from jumping on the stage. But it turned out the purpose of this little instructional session was much more specific than, “Don’t let some kid puke on the bassist.”
Once we were all gathered around, the tour manager gave us a standard spiel about not letting anybody from the audience stage dive. This is kind of beautiful, so I’m going to elaborate on exactly what kind of dicks almost every band you like are.
In every pre-show meeting I have ever had with every manager of every band I was always told not to let kids up on stage. At all. Invariably, every single time I worked stage for any band that came through the Masquerade, the assholes in the band would yell at us for being “too rough” with the kids that their own manager had told us not to let get on stage. And not, like quietly to us in between songs. Over the mics to the audience so they got to look all cool and tough like they weren’t going to take shit from “The Man”. Because obviously the twenty-one year old kid risking physical injury for minimum wage is a classic example of “The Man”.
So anyway, we got the usual spiel from Stuck Mojo’s manager with one very specific caveat: “Bones loves to stage dive, so he’ll probably be doing it a lot. When you pull him back on stage, don’t grab his ankles. He has weak ankles.”
What. The. Fuck.
Maybe Mr. Hardcore Metal Guy shouldn’t be diving off of stages into swarms of drunken metalheads then.
I have no idea how this idiot thought we were going to get Stuck Mojo’s frontman back on stage. Was he going to supply some sort of crane apparatus? Would Bones be wearing a safety harness that we could attach bungee cords to so he’d just get yanked back to the stage? This was absurd, but I supposed I would do my best to not hurt his tender wittle ankles.

But first we had to get through the opening acts. I don’t remember who the first band was, but the second band was Tree from Boston. They were awesome. I mean really, really good. They tore that place up and got everybody all worked up for the headliners. During their set, I also happened to notice this one dude right in front. He was built like a fucking Volkswagen bug, but with muscles instead of fenders. He had a shaved head with a bandana on and a big beard and looked 100% bugfuck crazy. He would randomly punch people around him and shove kids up against the stage and was just generally being a douche. Naturally he was right in front of me. So you understand the rest of the story, here’s the deal with the stage: 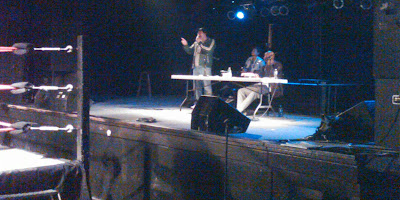 (That's from a wrestling show, but you get the idea)
It’s elevated to about neck height on the average dude. Maybe five feet? Then there’s a dip – sort of like a moat – and then the stage proper. Those of us working the stage would sit on the stage itself with our feet in the moat part and our knees usually resting on the front portion.
As soon as Stuck Mojo got on stage, this guy – who looked not entirely dissimilar to Tank Abbot, now that I think about it – became a Problem. He spent every second trying to get up on the stage and I spent every second trying to push him back down. It was literally a non-stop physical battle and the only thing I had in my favor was the high ground. It was probably about three songs in when he grabbed my arm. I had been pushing him back down by his shoulders the whole time, but this particular shoving match he grabbed my left arm at the wrist and the elbow and started pulling me off the stage. I clearly remember the lip digging painfully into my side as I went over. I never really panicked, I just remember thinking, “Well, I can’t let this happen,” and then unloading on the guy with rights. I just threw my right fist up against whatever portion of him I could make contact with. I must’ve hit that fucker twenty times as hard as I could before he let me go and faded back away from the stage.
I have to tell you here that physical contact with patrons – let alone dropping twenty bombs on their noggins – was strictly verboten at the Masquerade. The patrons did not know this and we certainly didn’t advertise it, but we were never supposed to physically interact with anybody for any reason. Of course, it did happen from time to time. It was a nightclub with alcohol and music. Shit got hectic every once in a while and there simply was no other choice than to grab somebody by the shoulder or neck or shirt or whatever and physically escort them outside. Like I said before, people don’t want to fight. But this time I knew I had to do something or I was going to get dragged into that crowd and have my ass stomped by that lunatic.
So I sat back and took a breather and kept an eye out for Tank.
Stuck Mojo played a few more songs and nobody gave me any more real problems.
And then all of a sudden I felt a massive pressure on the side of my head and the next thing I knew I was waking up outside on the back stairway with the guys from Tree standing around me. I had no idea what the fuck happened. The singer gave me a bottle of water and told me he just saw me go down and the rest of them grabbed me and pulled me outside.
I sat up after a while and drained that water bottle. I remember telling the Tree guys how awesome they were and thanking them. They told me to come to the merch booth after the show and they’d hook me up. I think somebody from the Masquerade staff checked on me at some point, but I’m not sure. I also think I got up and went back to work the rest of the show, but I’m not sure. I don’t remember anything else about that night, but I did have a Tree shirt and a couple of their CDs afterwards, so I guess I made it to the merch booth.
I still don’t know if Tank is the one that knocked me out or if somebody crowd surfing kicked me in the head or if an anvil fell out of the sky on me like in Bugs Bunny cartoons.
I’m just glad I never had to deal with Bones’ stupid fucking ankles.
Until next time, stay creepy
-Phantom
Posted by Phantom Troublemaker at 11:00:00 AM

Email ThisBlogThis!Share to TwitterShare to FacebookShare to Pinterest
Labels: life the universe and everything, music stories