I am a devoted fan of PIXAR. Nobody ahd to convince me that Toy Story, The Incredibles, Wall-E, Monsters, Inc. or a remake of Seven Samurai starring bugs were going to be cool. But then the ground-breaking studio went and made these movies about fish, cars, a stubby old widower and a cooking rat (!) that were just as fantastic and cool.
Each PIXAR film is a love letter to a particular genre, interest or style of filmmaking. And they’re done by people that really know how to write and create. These aren’t just movies that say, “Hey, this thing is pretty cool – check it out!” These movies show you the subject matter and explain to you exactly why the creators love it so much and why you should love it too all within a narrative that lasts 90 minutes or less.
PIXAR introduces us to characters, worlds and concepts that are at once familiar and delightfully new. I can say without exaggeration that no other collection of films can stand up to the quality of PIXAR’s first eleven features.
Needless to say, I was very excited about taking Lil’ Troublemaker to see Cars 2. The first Cars isn’t my favorite PIXAR movie. Actually, it’s easily my least favorite, but that’s kind of like saying Metlar is my least favorite Inhumanoid – not as good as the others, but still really awesome. Toy Story 3 was Lil’ Troublemaker’s first movie in the theater and while we did stay for the whole thing, he definitely wasn’t crazy about how loud everything was – particularly some of the trailers. Once we got into the actual feature he was fine, but some of the explosions and musical stings in the trailers were really loud. I sympathize with him. Sometimes I think theaters are unnecessarily loud.

you might think i'm delirious
the way i run you down
but somewhere sometime
when you're curious
i'll be back around
and i think that you're wild
and so uniquely styled
you might think it's foolish
this chancy rendezvous
you might think i'm crazy
but all I want is you
That song is way too much for a couple of buddies hanging out. I don’t want to get into the whole idea of cars fucking and I certainly don’t want to contemplate the logistics and/or morality of gay cars and their presence in Disney films, but that damn sequence has forced me to think about all of those things. There is no way the people who put this movie together are naïve and innocent enough to not realize the connotations of that song.
Next up is more “Mater’s a rube” stuff and a heavy-handed scene where McQueen tells Mater they’re not in Radiator Springs any more so he needs to act differently. For all the weirdness of the previous montage, this is the first genuinely groan-worthy scene in any PIXAR movie, ever. Never before have I seen PIXAR characters blatantly tell the audience what the moral of the movie was going to be. This is just bad storytelling.
Naturally, Mater does a bunch of retarded stuff that all leads up to him peeing on the floor in front of God and everybody on live Japanese television. Seriously. And then Mater makes such a big deal of how he never “leaks” that you think there’s going to be some explanation other than he’s just a socially incompetent disaster, but that explanation never comes (as far as I know).
I do need to admit something here – I did not see this whole movie. We left some time after the race in Italy. At that point I had been sitting for a while hoping Lil’ Troublemaker would want to leave. After a few minutes of switching seats, sitting on my lap, just sort of looking around the theater and even an aborted trip to the snack bar, he finally busted out his standard excuse to leave any situation: “Daddy, I want to go home. I miss my dogs.” I was relieved. So my point here is that some of my complaints may well have been resolved by later events in the movie. I kind of doubt it, but I’ll never know for sure.
Next we’re treated to what is actually a pretty funny bathroom scene where Mater is assaulted by Japanese toilet technology. While all of that is going on, Cars 2 does the one single thing that it does absolutely, unassailably, unquestionably right. Get ready.
Are you ready?
You’re not ready.
Hold on.
It introduces Bruce Campbell’s character. 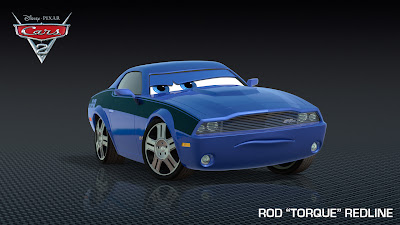 That’s right. Bruce Campbell. He’s the American spy car – something Redline - that has some secret information the bad guys want. There’s a brief fight between Campbell and a couple of goons where he gets his trunk kicked pretty good until Mater exits the stall in the middle of the altercation. Redline sticks a tracker on Mater before the tow truck exits. This leads to the whole mistaken identity thing that was honestly handled much better in that Bill Murray movie. Or that Richard Grieco movie for that matter. Mater meets Emily Mortimer’s character and is mistaken for the American spy.
Another thing besides the State Farm promotion that put me off Cars 2 a bit was Emily Mortimer’s interview on Conan O’Brien. She recently became an American citizen and made a big deal out of how she basically did it as a tax dodge and what a big pain in the ass it was. You know what, then? Go the fuck back home. If it’s such an inconvenience to become a citizen of the greatest country on the planet (for now, anyway), then maybe you shouldn’t bother. We certainly don’t need you here. Ass.
After Mater makes contact and is mistaken for a spy, he goes on to be such a fucking bonehead that he causes Lightning McQueen to lose the race in Tokyo. Now, it could be argued that McQueen was a little boneheaded himself to have a barely-functioning moron like Mater giving him race advice, but whatever. The movie then goes on to make it look like McQueen is the one who’s a douchebag for getting g pissed at Mater for not doing his job. Mater gets all sad and says he’s going home but ends up in a plane with McMissile and Shiftwell (Mortimer’s character).
Hijinks ensue; blah, blah, blah.
Oh, I forgot to mention that the evil scientist car and his goons torture Bruce Campbell to death on screen.
Technically Cars 2 looks as good as anything else PIXAR has done. Most of the voice acting is fine, with Larry the Cable Guy and Michael Caine standing out as the very best. Owen Wilson seems to be phoning it in, but I think that’s just what he sounds like. I seem to remember feeling that way about the first movie, too.
There’s also a really good song in the Italian part with “Vroom” in the title. The song is sung in Italian so I have no clue what was being said, but it was cool.
I didn’t like this movie. Lil’ Troublemaker didn’t like this movie. Even if you’re a huge fan of the first one I wouldn’t recommend watching it. Just watch the original again.
2 OUT OF 5 DEAD ANTHROPOMORPHIC CARS
Until next time, stay creepy
-Phantom
Posted by Phantom Troublemaker at 11:00:00 AM