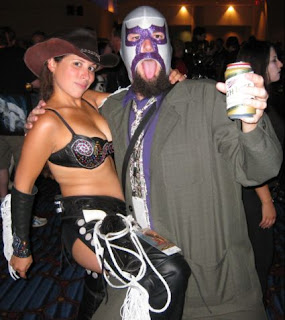 Believe it or not, this year’s Dragon*Con is just over a month away.
The approach of Dragon*Con brings forth all kinds of things – a feeling of excitement, remembering past years, thinking about this year’s guests and events and that weird pre-post-con letdown that I get when I look at the events that are happening on Monday and already feel a little bummed about the time when Dragon*Con will be over when it hasn’t even started yet. Most importantly, though, is the planning that you should be doing.
By now your costume(s) should be done or pretty darn close. You should have your budget planned and be sitting on that Con fund. As far as lodging, well – if you didn’t have that covered back in January you’d better have a friend with a room that you’re pretty cozy with because the host hotels are long past sold out and it will only take one year of staying somewhere other than the Hilton, Marriot or Hyatt to decide you don’t want to do that again. Even the nearby Sheraton will add a good thirty minutes travel time to anything you need to do. I tried that last year and ended up missing a couple of panels because I didn’t realize just how much that extra distance would throw me off.

So this year I got my host hotel reservation in early, my money is saved, my last costume should be done by the end of this week and I mostly know who I’m going to be hanging with and when. I know I’m not going to waste a whole lot of time and money hunting down sketches this year. I’m almost done with my list for the Dealer’s Room (I’ll put that up closer to the Con).
What we need to take a look at today is the Progress Report that just went up on the website the other day.
I gave whoever runs Dragon*Con’sFacebook page a little hell last year because they didn’t have the Progress Report done on time. This year, I have to give the Persons Responsible some credit. We may not have a working schedule yet, but what was published does include all of the guests to date, tracks, dealers, exhibitors and more. What’s more, it is presented in a far more appealing and patron-friendly package than we’ve ever seen before. I believe the daughter of the Dragon*Con originators is running the show now, and this year she is making her mark by creating a much more appealing presentation than we’ve seen in the past. The best thing about the changes is that everything is still very familiar, just with more… pizzazz. And I do enjoy some pizzazz. 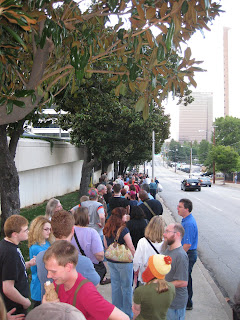 It’s worth noting that Dragon*Con is instituting a new system for picking up your badges this year. It revolves around the barcode you might have noticed on the card you got in the mail if you’ve already registered. I still don’t quite get why they can send out that card and not just send your badge. I’d pay more for the convenience of having my badge delivered rather than spending my Thursday evening standing in line for three hours. But maybe – just maybe – that won’t happen this year.
The booklet kicks off with a humorous retrospective of the last twenty-five years since this is Dragon*Con’s 25th anniversary. This is one of those nice little touches from the new management and I think it sets a good and different mood for the whole thing. Dragon*Con has never been without personality, but these kinds of things really bring you into it more.
So now that we’ve got the Progress Report we’ve got a pretty good idea of where things stand. A few more guests or another musical act may be added last-minute, but this is likely a fair representation of what we’ll have Labor day weekend. Let’s take a look at that guest list first and single out who you’ll be able to find ol’ Phantom slobbering over come September.
The guide splits the guests into “Featured Guests” and “Additional Featured Guests”; which I suppose is a nice way of saying “All the Rest”. Normally I wouldn’t divide ‘em up in my list, but for convenience sake I’m going to adhere to D*C’s format. This isn’t the full list, just the ones I’m interested in.
“Featured Guests”
“Additional Featured Guests”
I guess that’s it. I published this list with the full knowledge that I’ll probably never even see half of these people, let alone interact with them in any way. All to often I am too hung over or too busy to bother with anybody. The people I find Friday are likely going to be it for the weekend unless I happen to run into somebody at night like I did with J. Scott Campbell last year: 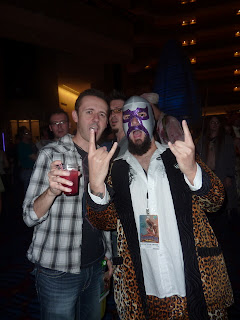 Speaking of how I love the nightlife and how I like to boogie, there are always musical performances in the evenings if you need somewhere incredibly loud and flashy to hang out.
2011 seems to be incredibly pathetic on the music front. I don’t know what happened, but there isn’t a single band I want to see this year. There is one artist worth noting, however:
And I suppose I should mention
That about does it for now. My next Dragon*Con posts will be the week before the Con and that’s when I’ll cover the stuff I want to buy, the costumes I want to see and my schedule so you can track me down and buy me a beer. Or stab me if you’re a disgruntled smoker. Maybe I shouldn’t publish my schedule…
Until next time, stay creepy
-Phantom
Posted by Phantom Troublemaker at 1:00:00 PM