Since Captain America looks to be the last great blockbuster of the Summer I wanted to write a little something about the guy.
The problem is that I’ve never really kept up with ol’ Cap. He’s been in plenty of stories that I’ve read and you certainly can’t be any kind of comic book fan without knowing Cap’s origin; but I’ve never followed the Avengers or any of his solo books (unless you count Nomad). I like the idea of Captain America and I like what I’ve seen of Steve Rogers as a character. Heck, 1990’s Captain America is one of my favorite movies of all time.
Okay – bad example.
While I don’t have the knowledge or insight to write any kind of thrilling analysis of Captain America’s history; I am qualified to write about some of his action figures. It turns out I have a lot more of those than I thought I did. You might notice that Mego Cap is missing from the list. I had a ton of Megos when I was a kid, but I don’t remember having a Captain America. And as I usually try to do, this list is all about stuff that I have personal experience with. 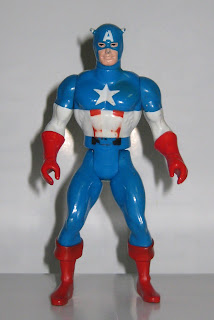 Secret Wars – Mattel – 1984
I never had a whole lot of Secret Wars figures. I think I was already a fan of the X-Men back then and I know I loved Spider-Man; but I was still more of a DC guy than a Marvel guy. And you just can’t argue that Kenner’s Super Powers figures were far superior to the Secret Wars line.
There were a few key figures I had to have, though, since there was no alternative for owning Marvel’s super heroes (Mom had thrown out or sold all of my Megos some time between when we moved from North Carolina and when Secret Wars hit the scene). I had Wolverine, Captain America, black costume Spider-Man and Kang. I didn’t know who the crap Kang was, but even then I was predisposed toward the purple and green.
The Secret Wars figures didn’t fit in with any other line and I rarely played with them. I wasn’t one of those kids that could overlook scale and design differences – even GI Joe and Star Wars didn’t mix in my world. But I was still glad to have plastic representations of some of the Marvel guys.
This Captain America figure is oddly the only one of those Secret Wars figures I still have. Well, Lil’ Troublemaker has.
I can’t really complain about this representation of Cap, particularly within the constraints of the Secret Wars style. He has sculpted gloves and boots and the little wings are even sculpted on his head rather than painted on. His mask even has sculpted lines. The articulation stinks, but the figure still looks pretty good for the time. In all honesty, this is a much more dynamic and heroic look than the better articulated Joes and Super Powers. I still think those are better toys, but the Secret Wars figures really did look super heroic.
Each Secret Wars figure came with a lenticular shield with a variety of different inserts. Cap was the only one who should have a shield; but I take issue with the fact that none of the inserts were actually what his shield actually looked like. How hard would it have been to throw a star-stripe one in there? I ended up making one myself, but my little homemade circle of paper did not survive the years.
All in all this Captain America is pretty darn good, especially when you factor in nostalgia. It isn’t anything I want to put up on a shelf, but Lil’ Troublemaker enjoys playing with it and that’s got to count for something. 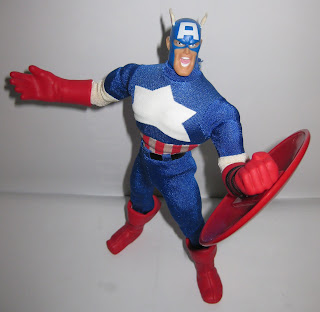 Famous Covers – Toy Biz – 1997(I think)
You want to talk about nostalgia fixes? Let’s talk about Toy Biz’s Famous Covers line.
Meant to be a callback to the aforementioned Megos, the Famous Covers featured the same fabric costumes and rooted hair of their predecessors; but with bulkier builds for the men and curvier women with rooted hair.
This is easily the cartooniest Cap in the house, even over Lil’ Troublemaker’s Super Hero Squad Captain Americas. The figure looks absolutely great, but the giant star on his chest combined with his big rubber hands and the completely insane look on his face make him look like he's singing opera. The costume is very good and I prefer the rubber mitts to the old vinyl ones from Mego. The boots are a little weak, though. They’re made from a pleather material and just look kind of funny.
The shield is awesome. The designs are molded on, not just painted and it features elastic straps so Cap can wear it on his arm or his back.
I’m a big fan of this one. Captain America was the first Famous Covers figure I bought. I’m not sure why but I just had to have him. 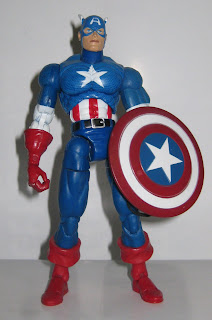 Marvel Legends – Toy Biz – 2002
Despite some inconsistencies and the sheer frustration involved in finding certain figures, Toy Biz’s Marvel Legends line remains the best 6-inch-scale super hero action figure line of all time. It was innovative, encompassed a huge and diverse selection of characters and carried toy collecting through half a decade that might otherwise have been a slump what with the mediocrity of the Star Wars line and a paucity of other dork-oriented licenses at mass market.
Naturally, this particular Captain America came out early in the line’s history. He came with a nice little diorama that I’ve either sold or thrown out. I’m not a big fan of stuff like that unless it has connectivity across the entire line, like with Marvel Select’s Zombie figures. I just don’t need extra hunks of crap cluttering up my shelves.
As much as I love this Captain America, the figure is sort of a mixed bag. The sculpting isn’t bad by any means, but it does seem very early-2000’s. Also, mine has very loose joints and has from the start. It’s always been kind of a trick to get him to stand up. His abdomen never sits quite straight either. I do really like the paint on this one, though.
His shield is nice and one of those clever things that Toy Biz was so good at. It has two elastic straps so it can fit on his back, but there’s also a clip that folds out to attach it securely to his wirst.
I’d say if you need a 6” scale Cap there are better ones out there, but this is the only one in this particular costume – his most iconic. I don’t have the later Ultimate version that Toy Biz produced because I hadn’t read The Ultimates yet and didn’t realize how much I would end up loving it. 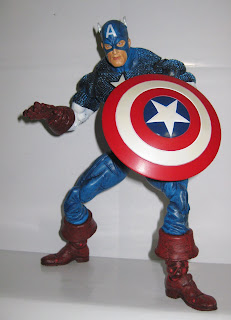 Marvel Icons – Toy Biz – 2006
I think this is actually my favorite Captain America figure. It’s huge, it’s well-sculpted and the paint just looks fantastic. He isn’t doing anything goofy and he stands amazingly well for such a large, heavy figure. 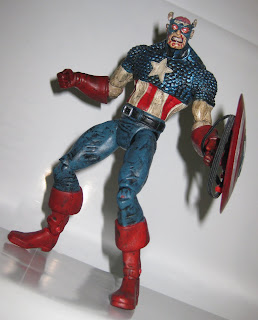 Marvel Zombies – Marvel Select – 2007
I absolutely could not believe these figures were happening. It seems crazy now, but when Marvel Zombies first came out it was extremely cool and subversive. It almost seemed like a risky thing for Marvel to be doing. And this joker Robert Kirkman that was writing it – who the heck was this guy doing these awful and hilarious things to Spider-Man and his Amazing Friends?
What’s more shocking than the fact that they made figures of Cap (well, technically Colonel America), Spidey, Hulk and Silver Surfer (sort of) is the fact that they never made any more. Once the first series of figures hit and actually looked fantastic I thought for sure this would be an ongoing line. Not so.
Colonel America here came with part of the base that connects the other two figures and forms a slaughtered Silver Surfer. He also includes a bird nest or a brain that both fit into the top of his opened skull. The articulation on this one is as spotty and weird as any of Marvel Select’s offerings, but the sculpting and paint are fantastic – statue quality. And that’s all that matters because it’s not like you’re going to give these to a kid to play with. Or at least I hope you’re not.
I absolutely list this one – along with Hulk and Spidey – as must-haves. They’re a fun footnote in Marvel’s history, despite the Marvel Zombies franchise continuing on beyond its logical end. There’s something very meta to be had there… 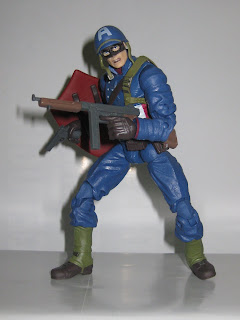 Marvel Legends – Hasbro – 2008
This Hasbro release is a close second to the giant Cap as my favorite.
This World War II-era Captain America was packed with the first ever Ultimate Nick Fury figure.
Cap has a removable helmet, a pistol, a sub-machine gun, a shield and all kinds of beautifully sculpted attached-but-separate pieces. This figure really is an astonishing example of what can be accomplished at the six-inch scale. 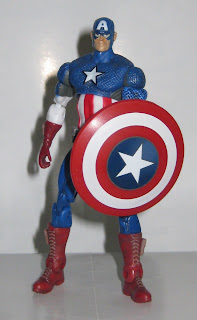 Marvel Universe – Hasbro – 2009
I’m not as a rule collecting Hasbro’s 3 ¾” (or is that really more like 4” now?) line of Marvel superheroes. But I have picked up a few that seemed appropriate to mix in with my GI Joe collection. This Captain America is one of them. This is Ultimate Cap – my personal favorite design for the character; except maybe for the new movie look.
This is a sturdy little figure that honestly looks as good as if not better than any of its larger contemporaries. He looks great standing in front of the Joes as a symbol of liberty and freedom!

Super Hero Squad – Hasbro – 2006-Present
These are Lil’ Troublemaker’s. He’s got quite a few Caps and they’re all pretty neat. My favorite is the one with the removable shield. I’m not so crazy about the Bucky one, but my son loves that motorcycle. And the fact that Hasbro worked the Punisher Cap into a line that is essentially for pre-schoolers is just whacko.
Super Hero Squad Super Shield Cap – Hasbro – 2011
We got this one when the first batch of movie toys came out. We already had the Iron Man version and I’m not too sure why they didn’t do a Thor, but this is a pretty fun toy. It isn’t all that poseable, but the shield lights up and the figure says several different things and actually plays a couple of songs as well. 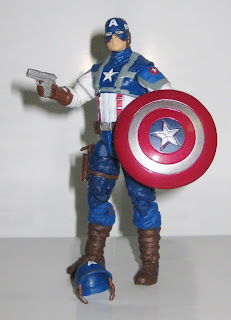 Captain America Movie Line – Hasbro – 2011
I bought Red Skull and Movie Cap from this line because I felt like they could work with my Joes. I love the look of these figures and I think Hasbro did well with the articulation. The only problem is that Cap’s right hand broke clean off while I was taking him out of the package. I super-glued it back on, but this is yet another example of a toy company using inferior materials. Cut it out, guys. 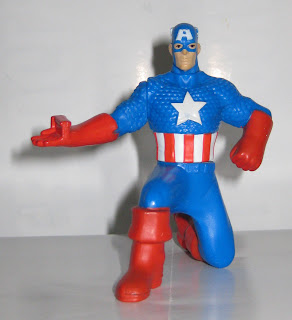 Captain America - McDonald's – 2010
I found this one at the last second. It's a crappy Happy Meal premium that Lil' Troublemaker has. It's supposed to throw the shield that came with it. I'm thrilled to report that this feature works just as well with or without the shield that we seem to have lost. Either way, you do not have a star-spangled shield flying anywhere.
And he kind of looks like he's presenting somebody's balls to you. Probably Tony Stark's. 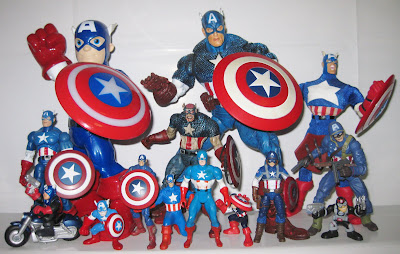