Toy Review – Transformers: Dark of the Moon Shockwave By Hasbro 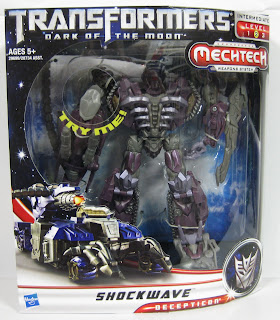 I think this is the first review I’ve done of a Transformer, but since I'm going to see the new movie at midnight I thought I'd give it a go with one of the new movie toys.
I’ve bought more Transformers recently than I normally would, mostly due to some excellent clearance prices and some characters I just couldn’t resist. I had planned to do a review of the Masterpiece Grimlock and just never got around to it. Same deal with the recent Sea Spray and whatever the little tank is that fits in his backside.
That sounded wrong.
I think the main reason I haven’t attempted a Transformers review is that I don’t feel like I have any business reviewing them. I like Transformers just fine, but they’re not my thing. I never had a bunch as a kid and I never had the same affinity for the Cybertronians’ saga as I did for GI Joe and Star Wars. Or even Duck Tales for that matter.

But I do have some favorites among the Transformers and Shockwave is one of them. Purple and - to a lesser extent – green have always been my favorite colors. This has led to me preferring a lot of villains over the years because it seems like the great majority of them are purple and/or green – to the point where I just realized I can do a whole article about that rather than list them here.
Apparently this Decepticon is short-packed, because it took a couple of trips to Walmart to find one and I haven’t seen very many since I bought mine. I’m not necessarily saying he’ll be hard to find, I just think if you see one and want it you should go ahead and buy it. 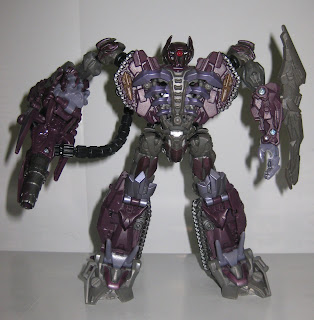 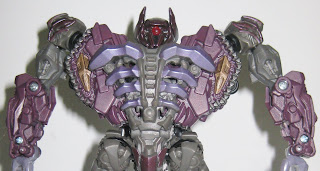 Sculpt: Robot mode looks good. It isn’t quite like the old Shockwave, but none of the movie robots are like their classic selves. I’m constantly surprised by the articulation in these toys. As a robot he’s just as posable as your standard six inch figure.
The transformation is a little complicated. Some of the parts seem like they don’t quite line up and you have to go back and move other parts around to make them fit. The big problem is when you’re tucking the arms away. Still, it can be done and once you’ve gone from robot to tank and back you pretty much have it.

Shockwave’s tank mode looks good. He’s not my favorite Transformers tank – that would be Banzaitron, who has the greatest name ever – but he has a solid mode and a cool gun. 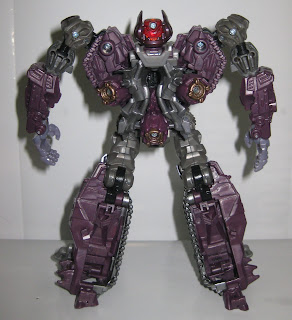 Design: There’s not a ton of deco on this guy, but he’s a pretty solid representation of the classic color-wise, right down to the hands and feet. 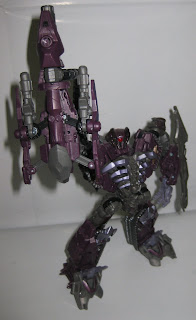 Accessories: Obviously Transformers aren’t ever big on accessories, but Shockwave comes with a turret that transforms into his arm gun and also changes into a more complex gun. It’s a lot of fun to change it back and forth and the mechanism that does it is sturdy and works well. 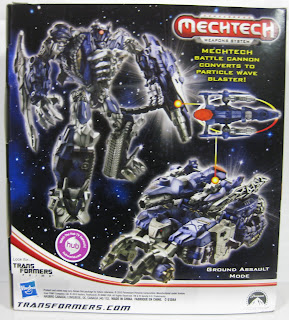 Packaging: Just a weird-shaped window box. I think the days of over-the-top packaging are mostly behind us thanks to the folks that listen to too much folk music. 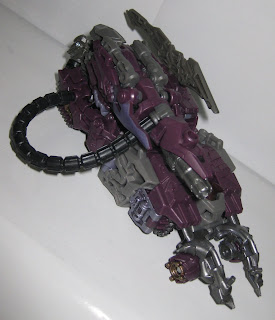 Overall: Like I said, I don’t buy a lot of Transformers, but I like this Shockwave. I’m curious to see what role he plays in the movie.
4 out of 5 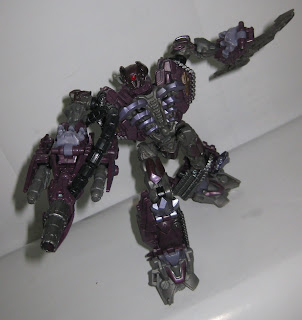 This is a pretty awesome movie-based Transformer. The transformation isn’t as ridiculously complex as some that I’ve bought and he can be recognized easily. If you want one, go ahead and buy it.
Until next time, stay creepy
-Phantom
Posted by Phantom Troublemaker at 11:00:00 AM