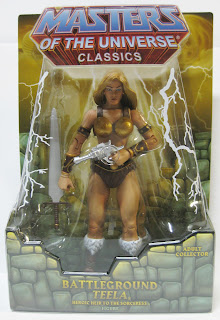 I am not in the least bit happy about Matty’s new shipping situation. It costs a bit more and takes much longer. What doesn’t make any sense is that they’re still using UPS for shipments of more than one item and that takes longer, too. I used to get my subscription items the day after they went on sale on the site. The last two things I’ve gotten have arrived three days later than that. Weak.
On the upside, neither of the two most recent figures have any noticeable defects; so way to go, there.
While I know all of the major players on Eternia, I am not overly versed in all of the ancillary characters, style guide references and mini-comic versions. I think this variation of Teela came from the mini-comics. The filecard on the back of the package certainly doesn’t help to explain the Warrior Goddess’ change in attire and – more strangely – hair color. And this is the same Teela we are all familiar with. 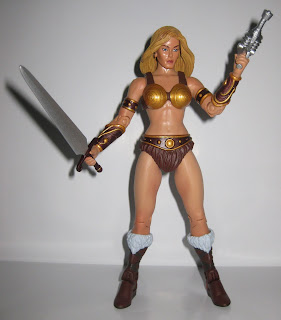 First Glance: I am a huge fan of this variation on Teela. It doesn’t matter where the look comes from because she looks like something out of Conan, and that is always going to be a win in my book. I don’t think I realized she came with a blaster, but I’m glad she did. It looks like she has new legs, which could be bad or good.
Man, how awesome would it be if Mattel could get the license to do Barbarella figures? 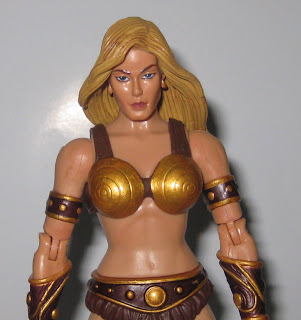 Sculpt: I don’t have the original Teela, but I believe the face on this one is the same. It looks good and is distinctive from the other females I have – Catra and Evil-Lyn. The hair looks great and I’m glad that it isn’t super-long. Actually, I might would have preferred it be a bit shorter because it interferes with the neck articulation as it is.
Most of this figure’s articulation is the same as the other MOTUC females, with ball-jointed shoulders and neck; swivel biceps (concealed just under the bracers), wrists, waist and calves (concealed at the boot tops) and pivoting knees and elbows with the standard rocker ankles. All of the joints on mine are solid, but the elbows feel a bit loose. I have a feeling they’re not going to stay posed forever.
Where this figure differs from other female Masters releases is the abdomen and the hips. Since this figure has a bare midriff, Mattel opted to forgo the pivot joint that most of the figures sport. I think this is great. While the joint can be worked into a ridiculously over-muscled male abdomen, it would be ugly in a female. And it really doesn’t do too much for the females that have it anyway, as theirs are restricted by the clothing they have.
The hips are another issue. Rather than the combination ball-joint/swivel that the other Masters feature, this Teela has a more basic ball-joint analog. It limits the posability somewhat, but the other hip joints would look ugly as hell sticking out of those fur panties. Mattel would have had to give the figure much larger trunks to hide the admittedly ugly joints the other females have and that just wouldn’t have looked as good. I definitely noticed the reduction in posability while I was taking the pictures for this one. I kept trying things that would have worked with other figures. All in all, though, I’d rather have a nicer looking figure than one that can doe deeper squats.
Speaking of furry panties, Teela’s look good, as does her Battle Bra™. The fit very well and have none of the weird scaling issues that more diminutive clothing items on smaller figures sometimes have (giant clasps, parts that are too flimsy or too thick). 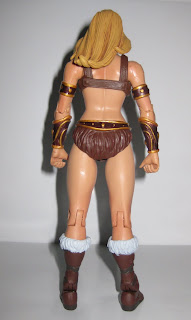 Design: Not much to say, here. There’s a lot of skin and it all looks… skin-like. Teela’s face has a minimal amount of “make-up”, and what is there looks natural and solid. The hair has some nice shading. The fur on the boots and panties looks good. So does the detailing on the metal parts. Honestly, this one would have been kind of hard to screw up. 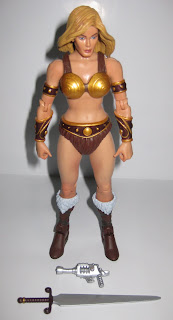 Accessories: Battleground Teela comes with a sword and a laser pistol. Thankfully, the sword is made out of a firm plastic and isn’t misshapen or anything. It’s a cool design and goes along with the Conan-looking motif. The pistol obviously does not go along with said motif, but looks very cool. It almost looks like one of those WETA guns.
While there really wasn’t a need for Teela to include any more than this, I can’t help but feel that Mattel could have thrown a little something else in. Perhaps an alternate head with a horned helmet (like Vikor’s) or a cloak or shield or something. But still, what’s here is good and perfectly acceptable. 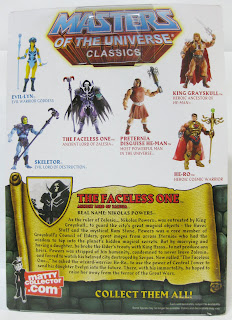 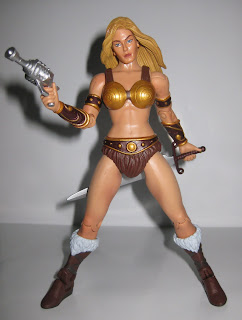 Overall: I am thrilled by this figure. I would love to have Viking-esque variants of everybody. I’m pretty sure Battleground Teela is the last truly Conan-looking one we’ll see, but I’m glad to have it.
4 out of 5 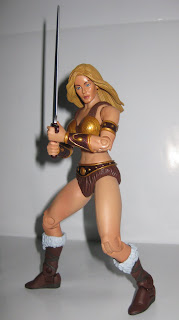 I’ve given up on knocking a point off for value. I still don’t like twenty bucks apiece for these, but I really want to judge figures purely based on their own merits. I understand price is a consideration in whether or not people buy toys, and that a large part of writing toy reviews is ostensibly to advise people on whether or not they should buy toys; but then how do you judge something you bought on the secondary market and paid too much for? Was the $35 King Randor worse because of the higher price? Is the Sgt. Slaughter I paid $40 for an even better toy because I feel it was worth it? What if I bought one of those shitty Tron figures for eighty-seven cents at Target – does that make it suddenly not such a fragile , poorly sculpted piece of shit?
No, Teela loses a point because I really think they could have gotten a little something else in her box. Uh… that box. Er, package.
Mattel has recently stated that they won’t be reissuing everybody any longer. Now it’s only going to be A-list characters. That is a pretty vague definition, but I’m not sure I would expect to see Battleground Teela reissued anytime soon when they haven’t even reissued the original in the last year (I don’t think). If you like the look of her, I’d go get one form BigBadToyStore or maybe just wait and see if you can avoid shipping and pick one up at Dragon*Con. Where I hope to see at least one Battleground Teela costume. 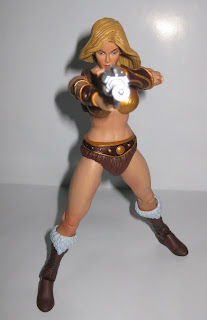 Until next time, stay creepy
-Phantom
Posted by Phantom Troublemaker at 4:54:00 PM