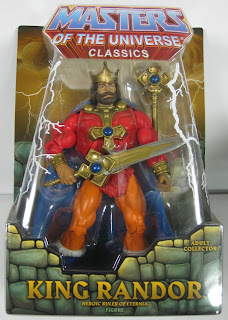 I don’t even know when King Randor was initially offered, but as soon as Matty announced Marlena for SDCC I knew I was going to have to get one.
Actually, there are several older Masters of the Universe Classics I’d like to pick up now. Man-At-Arms, Teela and Tri-Klops are on the list. I’d like a couple more Palace Guards. But my Holy Grail of older MOTUC figures is Wun-Dar. Man, do I want that guy. And his special bread shield.
But today we’re here to talk about Randor, who I got from one of the many friendly dealers at Heroes Con a few weeks ago. He was a fairly reasonable price so I had to get him. I probably should have gotten Wun-Darr as well, but I’m just not ready to part with sixty bucks for a single mid-size action figure. 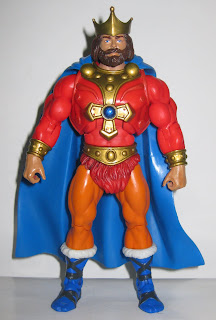 First Glance: King Randor looks kind of dumb. This is what he looks like and all, but man. Not too impressive. No wonder he needs a glorified pool boy to protect his kingdom. 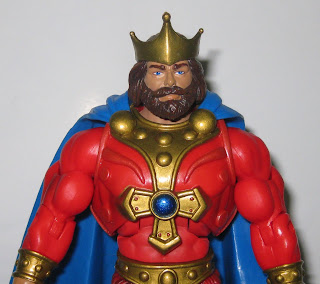 Sculpt: He really kind of looks like the Burger King. I guess any king with a beard is going to bear at least a passing resemblance to the fast food monarch, but Randor already has too many strikes against him without that unfortunate likeness.
Randor’s sculpt and articulation are absolutely standard. His whole body is just like He-Man’s, but with a chest piece that seems somehow bulky and wimpy at the same time. I like the big thing that is totally not a cross, but the rest of his little vest just does not work. The cape does though. It looks great.
Randor also sports the same off-putting, tiny hands as the rest of the human males in the line. Blech. 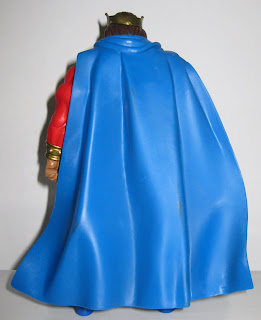 Design: All of the paint on my Eternian monarch is competently applied, if by “competent” you mean “accurately reflects the terrible color choices made for the original”. Red, orange and blue have never looked so awful together. This guy looks like a fucking clown. The more I think about it, the more I hate him. It’s really his stupid, orange tights that are ruining everything. He’d look better with bare legs. Even his wimpy chest thing wouldn’t be offensive without those miserable tangerine leggings.
Oh, and mine has a stain/mark on the back of the cape which doesn’t enrage me nearly as much as his tights. 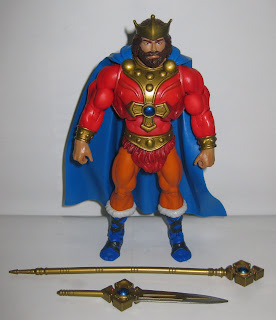 Accessories: King Randor comes packed with a sword and a staff that bear the same symbol as his chest piece, presumably the crest of the shitty orange-tights-wearing lineage that spewed this idiot forth into Eternia.
The sword is pretty badass. The staff looks okay, but mine was bent thanks to the incompetent shitheads that desing Mattel’s packaging. If I had my druthers, those asstools would have to wear orange wool tights 24/7. 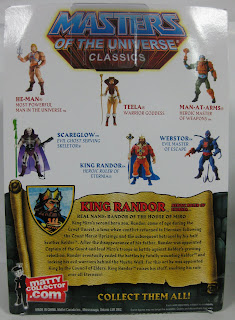 Packaging: The standard Masters of the Universe Classics packaging. It looks nice, makes the figures look even bigger than they are. You also get a bio on the back that is sort of a composite of each character’s history. Interestingly, the package is designed in such a way that you might fail to notice if a figure you are purchasing is sporting legwear in the worst shade of the worst color in the history of everything ever. 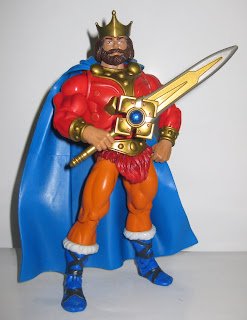 Overall: In the time I’ve spent writing this review, Randor has kind of grown on me. It’s rare that I loathe a perfectly good and – more importantly – accurate figure as much as I do Eternia’s king. That makes Randor a very special boy.
4 out of 5
But only because of the bent staff and the cloak stain. Otherwise, I wouldn’t change a thing about this hideous bastard. You can buy one to accompany the Queen Marlena you’re undoubtedly going to buy at BigBadToyStore. 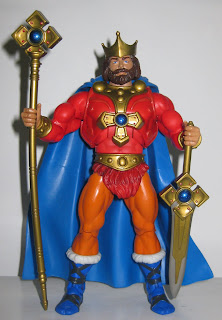