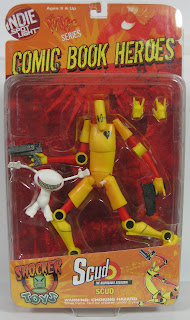 This might qualify as the weirdest toy find ever. Or the oddest circumstances. I don’t know, I just can’t believe I found this thing in Toys R Us for five bucks.
Shocker Toys produced this series of wacko indie comic book characters a couple of years ago in the wake of Hasbro getting the Marvel license and Marvel Toys/Toy Biz’ flop of an attempted recovery – it’s ludicrously named “Legendary Comic Book Heroes” line. It’s kind of the same thing as JAKKS losing WWE and getting TNA, except I think the LCBH might have actually done better. I’m pretty sure that’s because TNA is fucking terrible.
But anyway, I always wanted a Scud from the Comic Book Heroes line, I just never wanted to pay shipping for it and have either never seen one at a con or have forgotten to look. They also did a figure of Sam Keith’s The Maxx in that series. I wouldn’t mind having him, but I’ve still got the McFarlane version and it’s pretty nice. I’d love to have the Mr. Gone mail-away figure though. Too bad they never made it, despite including the order forms with the figures.

I suggest you go and read ShockerToys’ Wikipedia entry. It’s kind of hilarious.
So I found Scud at the Toys R Us by Stonecrest Mall. He was just hanging on a peg in front of all the DCUC figures. Not a single other Shocker Toy in sight. I was going to buy it regardless, but when it came up for $4.98 I felt like the luckiest boy ever! Actually, Lil’ Troublemaker was the lucky boy because he got an extra toy out of the deal. I figured if I was only spending five instead of fifteen he could get something extra out of the deal. 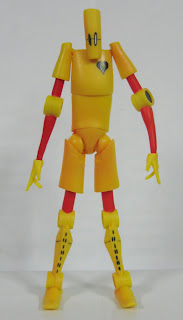 First Glance: Looks like Scud. I like the packaging. The Isz confused the shit out of me initially because I forgot that each figure in the series came with one. 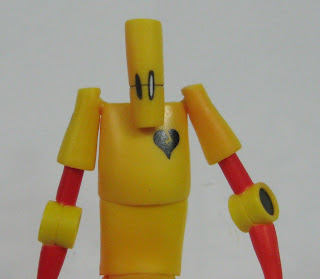 Sculpt: Wonderful. The proportions are all correct and the articulation is fantastic. Scud has ball joints at the neck, shoulders, hips, ankles and wrists; all of those points are removable as well. He has pivots at the elbows and knees and swivels just below the hips. There is also a rocker joint on the abdomen. This figure can be posed just about any way you want and is perfectly balanced so it can stay that way. The plastic is sturdy and the joints are tight. It is amazing to me that a tiny little fly-by-night company can make a figure this solid but you can’t touch Mattel’s Robin without his fucking feet breaking off. 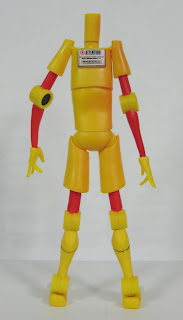 Design: The colors are bright and nice to look at. The paint apps are tight and accurate and the sign on Scud’s back is perfectly legible despite being super-tiny. 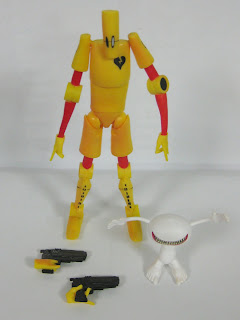 Accessories: Scud comes packed with a plain Isz and empty hands that can be exchanged with his gun-toting ones. Though I can’t imagine why you’d want to do that. I don’t like this Isz quite as much as the McFarlane one. It isn’t bad or inaccurate (Lord knows you’d have to try hard to fuck up a representation of Sam Keith’s nutball art), I just like McFarlane’s more. The hands switch out easily. 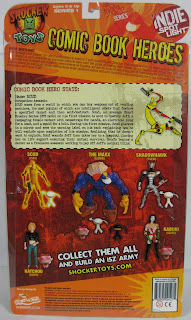 Packaging: Awesome package – the best kind, really. It’s just like the Outer Space Men – where the backing is a piece of cardboard that slides out of the plastic blister. This means that the figure can be repacked as many times as you like. 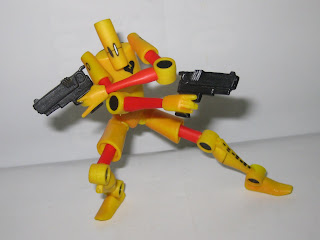 Overall: It isn’t very often you come across a perfect action figure. Scud is not only as accurate as he could possibly be, he’s also tons of fun to play with. I literally couldn’t put him down once I opened him. Great, great toy. Makes me want more of Shocker’s stuff.
5 out of 5 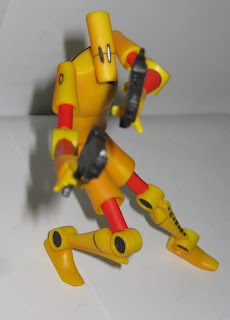 If you ever see this one just buy it. Even if you haven’t read any Scud comics (you totally should, though), this is a fun, well-made toy. A little poking around shows me you should be able to get one for around fifteen bucks plus shipping and you really should. 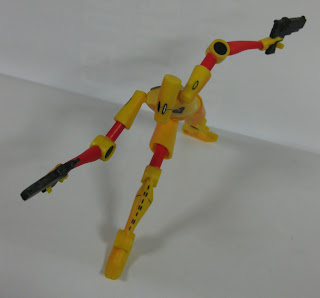