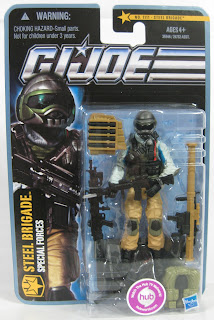 I know this is going to be hard for you to believe, but I never had the Steel Brigade Trooper when I was a kid.
I think I filled out the form for it four or five times but for one reason or another I never sent it in. I wish I could convey how baffling this is to me – I mean, I sent off for all of the mail-in figures. I think my mom had no problem writing that check knowing that she’d have a personal servant to get the mail for the next six-to-eight weeks.
You’d think the allure of a for-real, official GI Joe filecard with my name on it would have been enough to get me to order fifty Steel Brigade Troopers. I do sort of remember being let down that you couldn’t pick what your figure looked like. I didn’t expect Gentle Giant to come to my house and do a head scan or anything. That’s ridiculous – Gentle Giant didn’t exist in 1987. But I think I was under the impression that you’d at least get to pick parts, not be stuck with some guy in a blue turtleneck with a big head.

As I sit here and write this, I am glad I never ordered one. You know why? Because there’s no way that filecard would still be around after twenty-four years and I’d have to be bummed about losing it. Now I can just be happy that I own a new Steel Brigade Trooper that doesn’t look like such a dipshit. 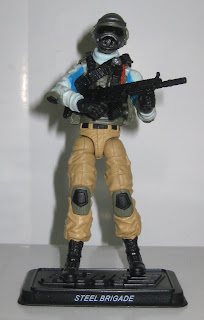 First Glance: This guy is very reminiscent of Airborne, who was always one of my favorite figures and should have a modern version coming out soon. Heck, if you’re living outside of Georgia he’s probably been out for months. We’re a little behind here. Well, we’re really even more behind because I got this guy while we were in North Carolina. I have had a lifelong love affair with North Carolina. We would go up there a few times a year to visit my extended family and toys always showed up there first (and still do). I have never returned from a North Carolina trip without bringing back some toy or figure that wouldn’t be seen for weeks in Metro Atlanta. My friends hated me. I had the Killer W.H.A.L.E. a full month before anybody else.
I guess I should talk about this figure some more. This Steel Brigade Trooper is instantly recognizable, but also looks more like an actual military person than the old model. 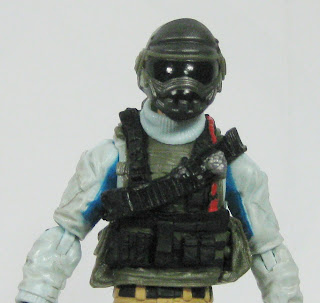 Sculpt: I’m sure some parts were farmed here, but I’m not going to sit down and figure them out. I’ll just tell you that this guy works. I’m pretty sure that’s Beachhead’s head, though. They’ve used that guy’s noggin for approximately 8,926 figures at this point. I like the legs, but they don’t quite line up right around the knees. Hasbro seems to be having that problem with some of the new Joe figures and their double-jointed knees, which is weird because those knees have been around for, like, four years now. Amazingly, the Trooper’s thick vest doesn’t really interfere with his movement. You can pretty much get him to hold his guns two-handed if that’s what you’re into. 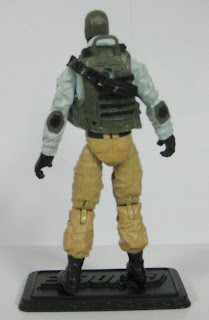 Design: The modern version’s colors are a bit more subdued than the original. This one really looks much more soldiery. They’ve packaged him as being part of GI Joe’s desert forces and he looks the part. I find I don’t even need to go into accuracy of paint apps with Hasbro’s GI Joe line. If I run into any problems I’ll let you know. 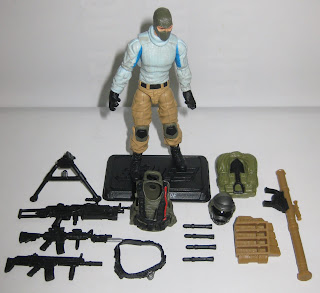 Accessories:Like all single-carded Joes from the past year or so, the SBT comes with a TON of gear. It makes a little more sense here than it does with some other figures because this guy is obviously intended to be a troop builder. Between his removable vest, bandolier, helmet and plethora of guns (yes, El Guapo – I would say he has a plethora of guns); not to mention two different backpacks, you’ve got a lot of customization options here. 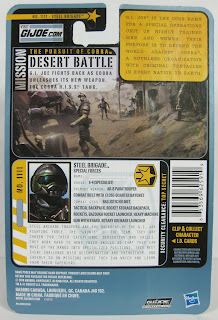 Packaging: Simple Joe packaging. For this scale of figure, nothing will ever beat the classic plastic blister glued to cardboard. They’ve brought the filecards back, but I really wish they still had that tab at the top left.Hasbro was nice enough to leave a blank spot so you could put your name on this one, but thanks to the magic of modern technology, I went a bit further with mine: 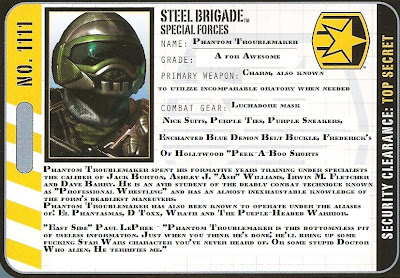 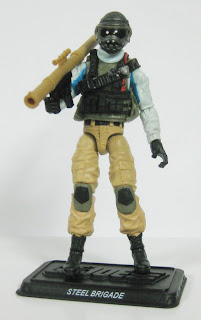 Overall: I wasn’t initially excited about this guy like I was about the next two Joe reviews you’ll see, but now I kind of wish I’d bought my standard troop builder allotment of four. He’s really neat.
4 out of 5
Hasbro did a great job updating this guy. If you’re a sucker for troops like I am, you need to keep an eye out and buy several as soon as you see them. 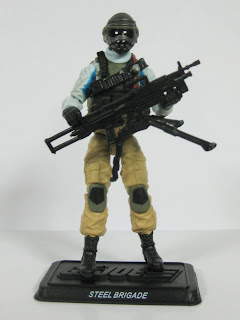 Until next time, stay creepy
-Phantom
Posted by Phantom Troublemaker at 2:17:00 PM