The Short Tale of the Gross Thing About She-Ra

CAUTION – THIS IS A DISGUSTING STORY 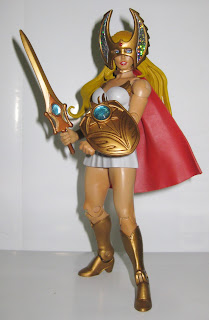 If you’re looking for an actual review of Mattel’s Masters of the Universe Classics She-Ra – Princess of Power figure you should go HERE.
The following section contains adult material that is unsuitable for pretty much anybody. I will be making some nasty jokes and comments about a beloved childhood toy. If you yourself are a child or are sensitive about such thing or have ever said something monumentally stupid like, “George Lucas raped my childhood!” then I ask you to return to YouTube for some more kitten videos. Because I am about to rape the fuck out of your childhood if you have any regard for She-Ra, Princess of Power.
Also, this is ABSOLUTELY NOT MY FAULT. It is Mattel’s fault. Blame them.
I don’t know if the mere sight of me is exciting to a seven inch toy or what, but when I unpacked She-Ra I discovered that she was… ahem… lubricated. And not like, her knee or shoulder or something. There. In that area where ladies… lubricate. 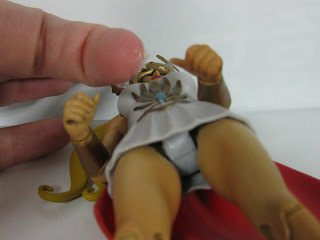 Normally my reaction to uninvited surprise goo being smeared on my person would be to shriek like a little girl and run around the room, only then realizing why people keep boxes of Kleenex just sitting around their house (I don’t and have always found those people to be a bit strange, despite the fact that two of them are my parents). Fortunately, I was already in a blogging state of mind since I was getting ready to take pictures of the apparently easily excitable Princess of Power so I grabbed my camera and took a picture of the… residue.
Then I shrieked like a little girl and ran upstairs to wash my hands until they were redder than Catra’s cowboy boots.
I did not, however, clean She-Ra’s crotch. There is still a sizeable glob of lubricant there that I want to save and show Monkey and Evil next time they come over. It’s that unbelievable. And I don’t think I would ever feel comfortable cleaning a toy’s crotch in the way that this particular crotch needs to be cleaned.
Also, any time I might be doubting my appeal (which believe me, is not often) I’ll just take a look at She-Ra’s squirrel covers and remind myself that Phantom Troublemaker is so darn sexy he makes plastic toys gush. 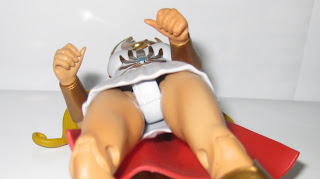