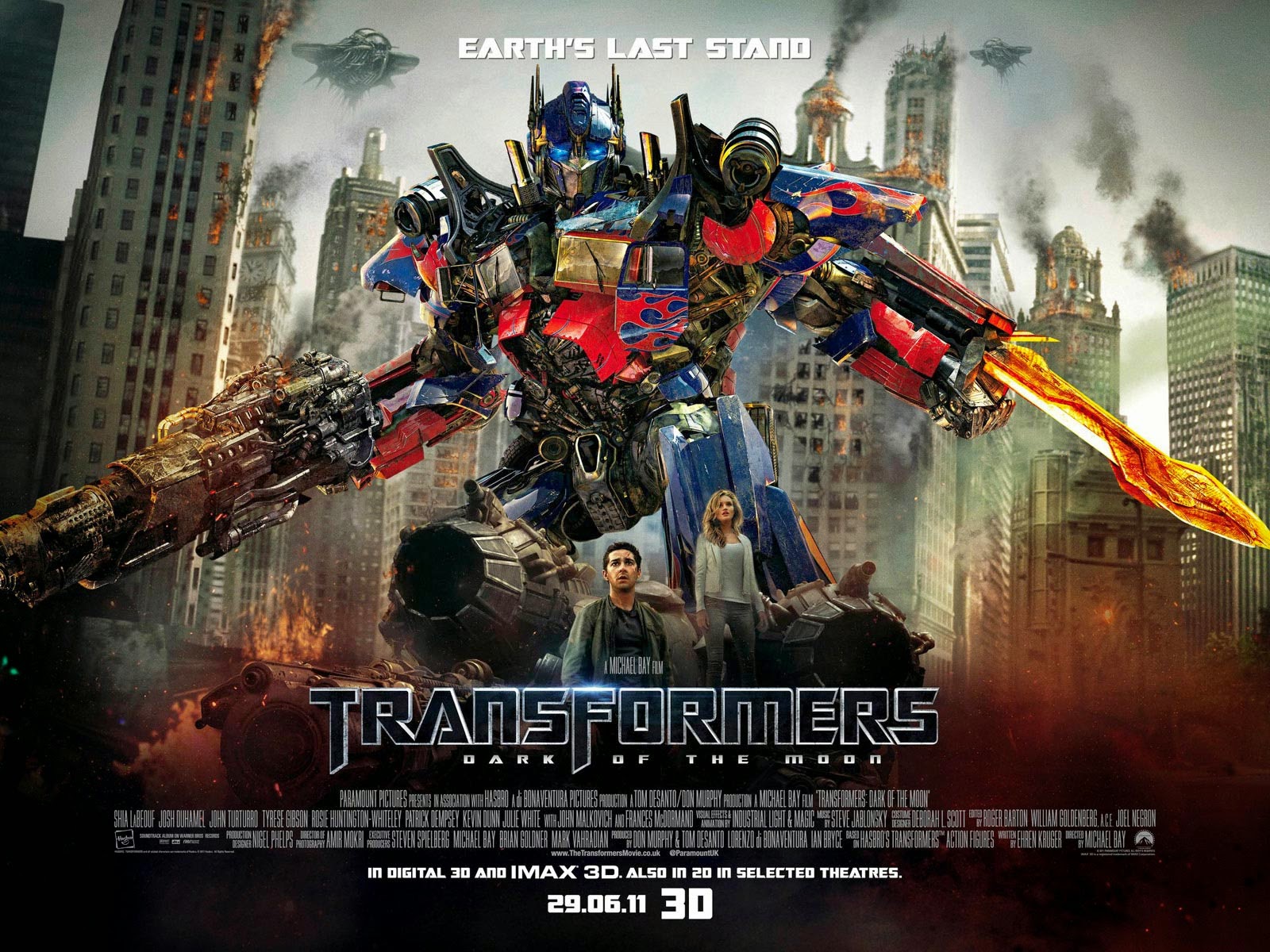 This is a 2D review. The 3D movie effect doesn’t work due to an eye problem I have that I can never remember the name of, so I don’t go to 3D movies.

I dug the first Michael Bay Transformers movie. I would have liked a little more characterization for the title characters; but overall I thought it was just about as good as could be expected. It had more profanity than I would have liked, but whatever.

I thought Transformers 2: Revenge of the Fallen was a far superior movie to the first, mainly because it featured about twice as much “giant robots beating the shit out of each other” action. No, the story wasn’t amazing and the human-centric portions were just sort of there. The bottom line is that the movie gave me exactly what I wanted: lots of explosions and Autobots fighting Decepticons. Unfortunately it also gave me the Ghettobots – Skids and Mudflap – and about fifty times as much profanity as the first. I haven’t watched it again. I know I will at some point, but the mere thought of those stupid, cursing robots puts me off every time I think about it. The problem is compounded by the fact that I loved the rest of the movie so much.

I suppose I should take a moment to address my hypocrisy.

I have a huge problem with the cursing and profane content in the Transformers movies. It’s totally unnecessary and adds nothing to the movies. The movies that are based on a toy line that is marketed to children. The military action I can accept, the robot-on-robot violence (and downright gore) I can accept, references to drugged brownies I can accept. That’s all stuff that kids are either not going to pick up on or not take as real. I remember being a kid and understanding fantasy action. And I wouldn’t have known why pot brownies were making Mrs. Witwicky act goofy. But you can’t miss expletives. They’re there and obvious and I cringe every time one is uttered in these things. One or two for dramatic effect would be fine (even the animated movie utilized that), but barely five minutes pass in any of these without somebody saying, “Shit!” I just don’t think that’s okay from something about children’s toys.

Which is where my hypocrisy comes in. Because obviously a lot of the content on Needless Things is about children’s toys. And I do tend to curse. Maybe not a lot, but I do it when I feel that dramatic effect is needed or when I’m quoting something. I guess I just can’t imagine a whole lot of kids are reading this thing. If you’re reading this and you’re under 13 let me know. I’ll stop with the “fucktards” and “shit nozzles”. And yeah – I know the Transformers movies are PG-13, but why? They could be exactly as good as PG movies. And even if I’m wrong and there’s too much “Adult Content” in the way of action and fantasy violence; then the cursing could still be left out. Don’t just throw it in with the mindset of, “Well, if they’re going to give us a PG-13 for robot blood we might as well take advantage of the number of times we’re allowed to say shit and fuck.” Which is what I suspect happened because – as I said – the cursing adds nothing to the movies.

Sorry. That was a ramble.

So I went to see Dark of the Moon Tuesday at midnight with Gnoll and The Big Guy (sorry, The Big Guy – I use nicknames for everyone and that’s who you were in my head until a couple of years ago when we had hung out enough for me to remember your name. Be glad you’re not “The Other Big Guy” because there is one). TF3 was on my short (but longer than usual) list of movies that I had to see in the theater. I believe Cap and Potter are the only ones left for the Summer unless the TribeCalled Quest doc actually gets released here.

I went to a different theater for this one since the guys live downtown. We met at a Regal that’s sort of halfway between. I hate Regal theaters. I’d rather see a movie in a shithole theater because at least those places don’t pretend they’re nice. I always have some kind of problem at Regal; whether it’s the uncomfortable seats or a tiny screen or bad sound. This time the show I had bought a ticket to was cancelled. I’d bought the ticket Monday afternoon and when I printed it at the kiosk Tuesday night I got a piece of paper saying, “Your show has been cancelled. Please visit customer service for further information.” No e-mail, nothing. I had to show up at the damn theater thirty minutes away from my house to find out that the thing I had paid money for was not available. I call bullshit on that.

If I can get a little graphic for a minute, I texted Gnoll before I got my ticket. The text was, “I’m going on inside because I can’t do what I need to do here on the sidewalk.” What I needed to do was poo. I’d had a big ol’ bowl of chili for dinner and it was requesting egress from my body. But then I got my non-ticket to the non-show and I figured I needed to get that situation rectified before I did anything else. Unfortunately there was a huge line at the counter because Regal Theaters had sold a lot of tickets to the show that they cancelled. I had to wait a while to get to the front and finally found out that they were reticketing for a 12:15 showing. Fine. I got my 12:15 ticket and called Gnoll to let him know what was up. He walked in while I was on the phone with him. We had some small talk and they got concessions (I’ve been soda-free for two weeks now, by the way - mostly because I’m tired of spending money on my teeth) and then went to sit down. I was more interested in catching up with Gnoll then in pooping because there are a few shared interests there that I only have in common with him. But then we talked through the trailers and the movie started and the first fifteen minutes are fucking incredible. And then the rest of the movie just has this lightning pace where you really don’t have a few minutes to leave so I never got up.

I don’t know what happened to that poop. But I’m a little worried. Gnoll, if you’re reading this – we need to hang out more. Your absence is affecting the health of my colon. I can’t afford too many more incidents like that.

Again, sorry. You didn’t want to hear about my poo.

So I already said the first fifteen minutes of TF3 were great. They are. It’s one of the coolest setups I can remember seeing and it’s going to make all the nerds that can get over themselves long enough to see this movie absolutely geek the fuck out. I’m not even that big into the space race or NASA or anything and I was geeking out. Seeing one of the defining moments of United States history intertwined so cleverly with a childhood favorite was just awesome.

First and foremost – the Ghettobots are not in this movie even for a second. Their absence is not explained – even though we are given a specific head count of the number of Autobots on Earth – and I do not care. Even better is the fact that Bay and the writers did not come up with an equally insufferable replacement for the twins. As a matter of fact, aside from the continued presence of near-constant profanity the general crudity of the movie has been toned down a lot. 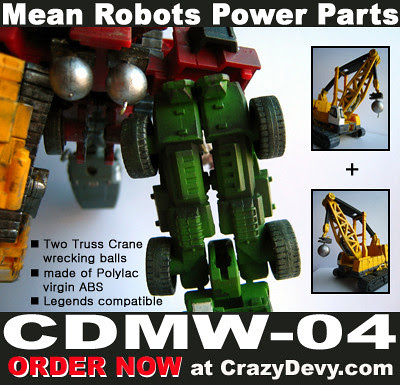 Nobody gets peed on this time and there is nary a robot genital to be seen (though I still maintain my opinion that Devastator’s balls were hilarious up until the point where John Turturro pointed them out to the audience). The closest thing we get to irritating robots this time are Wheelie (the leg-humping toy truck from the last one) and Brain (a laptop that I think is new) and they really aren’t bad at all.

Let’s start with some of the bad here so we can finish on a positive note. That’s how I always did my employee reviews and I think it works for movies, too. 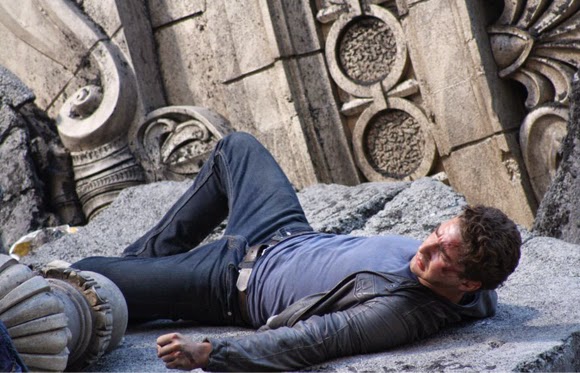 CONS
Believe it or not, that’s pretty much all the issues I had with the movie. Compared to what worked, those are relatively minor. There wasn’t a single thing this time that I can’t overlook in favor of the rest of the movie’s awesomeness. Such as: 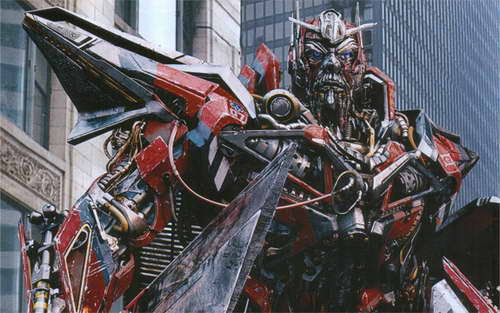 PROS
Man, there’s probably a lot more I could go on about. Tyrese Gibson and the white military guy were solid and fun to watch again. Frances McDormand was great (of course). Megatron looked gnarly and awesome. Optimus Prime’s trailer turned into a big, weapon-dispensing arch thing. Soundwave had speakers on his robot form that thumped when he talked, and when he talked he sounded like Soundwave. SPOILER ALERT!  : The Wreckers were in it! Sorry, I couldn’t keep that one in.

The point is this: TF3 is a big, fun movie. I had a blast watching it and so did everybody else in the theater. You know what happened? The whole theater applauded and cheered at the end. I haven’t seen that since The Dark Knight. We loved this movie. I’m not saying it’s one of the best I’ve ever seen. It had its flaws. But it was fun to watch and I’ll be buying it when the Blu-Ray comes out. You need to go and see this in the theater.

4 OUT OF 5 GIANT ROBOTS WITH AN UNNECESSARY REPRESENTATION OF HAIR
-Phantom
Posted by Phantom Troublemaker at 11:00:00 AM