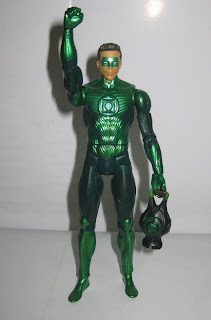 I knew I was going to end up with at least a Hal Jordan from the Green Lantern Movie Masters line. There’s no way I was going to pass this one up.
I thought I would end up skipping the maskless variant since Mattel did the unthinkable: they looked out for the consumer and did not include a piece of Parallax with what is essentially a very slightly different version of the same figure. But then they pulled the ol’ something-or-other and packed in a whole extra Green Lantern Corps member. Granted, it’s Bzzd and he’s barely larger than Hal’s hand; but c’mon. You’ve got to have Bzzd! Maybe I’ll make a Van Wilder out of that one. 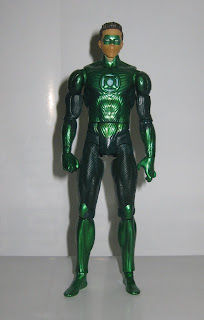 First Glance: I love the look of this line. The colors all look so good. I’m excited to stand Hal next to Batman. 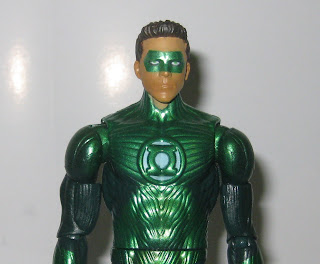 Sculpt: While I like looking at the Movie Masters, their functionality is questionable. I think if you asked Mattel what the hell was going on with the articulation, they’d tell you they were trying to make it look more “organic” to complement the designs of the characters. I get it, but it doesn’t really work. The ball-joint analogs they have on Hal’s knees and elbows are so restricted as to be near useless. Neither set of joints bends more than 45 degrees and they really don’t look any better than regular joints. And they’re also so loose that when you do move them the little bit that you can the limbs don’t stay that way and the figure falls over. His waist looks like crap, too. I can’t imagine why they would use those impractical joints on the knees and elbows – presumably for aesthetic reasons – and then put that ugly line across the figure’s abdomen, which is oblong in shape and looks terrible if you utilize the articulation anyway.
So the articulation is pretty awful, but aside from that the figure is visually pretty pleasing. I like the movie concept for the uniforms and I think it looks a lot better than the white glove thing. If the ring makes the uniform, spandex just doesn’t make as much sense. All the muscle-looking detail on the uniform is great, but I was a little disappointed that the toes weren’t more defined. I just think it’s funny how you can see Reynolds’ toes in some of the promo shots; which – again – makes sense. A friend of mine was mocking the visible toes, then I asked him why it was okay that we saw so many of the aliens’ toes defined through their uniforms in the comics. He didn’t admit it, but I know he saw my point.
The head sculpt looks like Ryan Reynolds as far as I can tell. It’s amazing how much that little domino mask really does obscure the likeness. 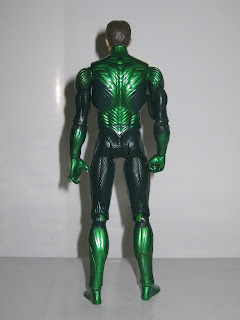 Design: I love the paint and color choices on the Movie Masters. Hal is expertly painted. The head looks good, with the appropriately whited-out eyes and pupils. The GL insignia is centered and looks good. 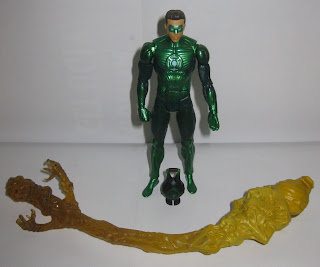 Accessories: Each retail release figure in the Movie Masters line comes with a piece of Parallax. According to the internet, Parallax looks like a stupid piece of shit. We’ll see. The internet isn’t always right. Unless you’re reading Needless Things, of course.
Hal comes packed with a power battery that he cannot hold.
Which brings me to one of Matty’s hilarious claims: that Hal’s left hand was sculpted specifically to hold that Lantern. Bull-fucking-shit. The guy that sculpted the Lantern and the guy that sculpted that hand were obviously unaware that either existed. I want to see the ToyGoblin post a video of himself putting that fucking Lantern in Hal’s hand and then creating a slight breeze in the figure’s vicinity. Of course, first he’d have to get Hal to stand up for more than twenty seconds. 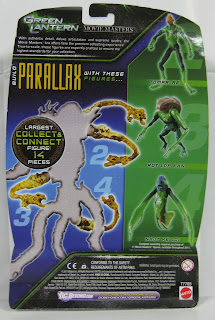 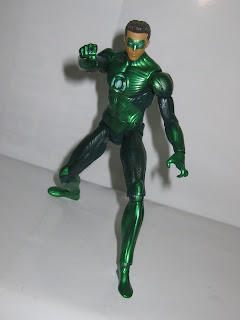 Overall: Despite the bad joints and closed fist and hand that can’t hold the power battery I don’t hate this figure. I freely admit it could be a whole lot better, but I just don’t hate it. I can’t, however, give it a very good score:
2 out of 5
Sorry, Mattel. As much as I like the look of this guy and think he looks great on the shelf with the rest of the movie Corps, he just doesn’t make the cut as a good action figure. If you’re going to buy this, know it’s to own a movie version of Hal Jordan, not to get a good toy.
Until next time, stay creepy
-Phantom
Posted by Phantom Troublemaker at 11:00:00 AM