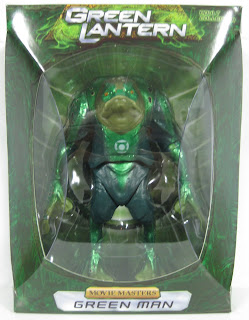 I was on MattyCollector.com at 11:55 the day this guy went on sale. I knew he wasn’t going to sell out, but I was a little nervous that She-Ra might. If you click that link you can find out how that went.
Even before I was sucked into the Green Lantern Movie Masters I knew I wanted to get Green Man. Beside the fact that he’s a cool-looking giant frog, I like the character from the arc with Stel (who I think is actually the second Green Man). I’m curious to see how big a role Green Man has in the movie and if they will pursue the idea of the Alpha Lanterns. Imagine Green Man having his own mini-arc within the live-action films – awesome! 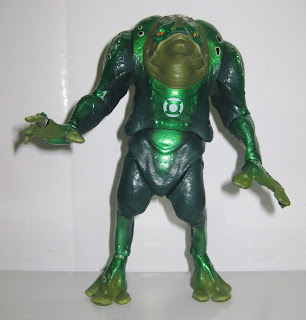 First Glance: Twenty-five bucks seemed a little steep to me, but once I had the guy in my hands I felt a little better. He is big and heavy. I’m still not sure he’s twenty-five dollars big and heavy, but he is a lot of toy. Makes me even more excited for the SDCC Kilowog. 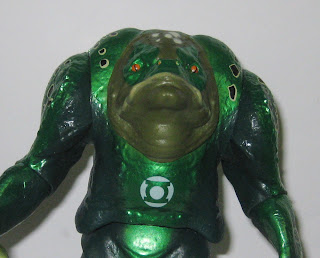 Sculpt: Just standing there, Green Man looks awesome. So far I have liked all of the character designs done for the movie and this guy is no exception. The articulation is where Green Man gets a little weird (like most of the other figures in this line). The head is on a swivel and barely moves which isn’t a huge deal. The arms swivel at the shoulders and have ball-joint analogs at the elbows and wrists. This all works fine. The ankles are ball-joint analogs and the knees pivot. Fine. The problem is the hips. The figure is designed with the same hip articulation as the DCUC figures and it just looks damned strange. I would have preferred simple swivels to this, as the figure looks terrible if you utilize the articulation anyway.
So Green Man has weird hips, but everything else is pretty good.
I thought the big guy would be top-heavy and have trouble standing up, but he’s managed to stay upright on the shelf for a couple of weeks now. That’s more than I can say for certain other Corps members: 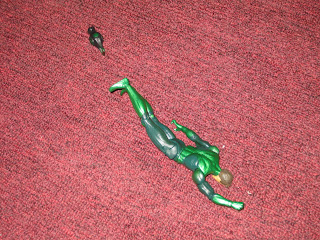 All of the detailing on this figure looks nice. From the skin to the costume to his crazy frog face, it’s all great. 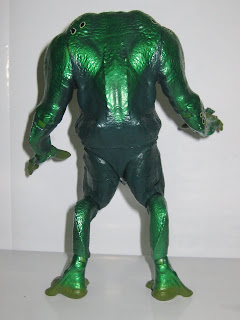 Design: Mattel has used the same basic shades for all of the Lantern uniforms, and for that I thank them. Green Man’s colors are tight and well-placed. His skin has great coloration and looks very life-like. 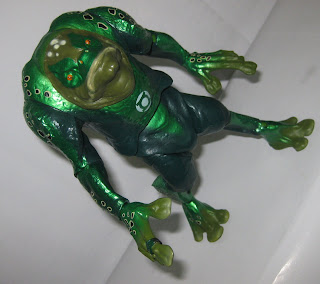 Accessories: Nothing. Mattel has produced some lame excuses about why the Movie Masters don’t come with constructs and I personally think they are all bullshit. I don’t have any proof of this, just a fair amount of familiarity with Mattel’s propensity for making some stuff up and outright lying about other stuff. At least these guys could have come with Lanterns. I know Green Man wouldn’t be able to hold it, but that didn’t stop them from including one with Hal. 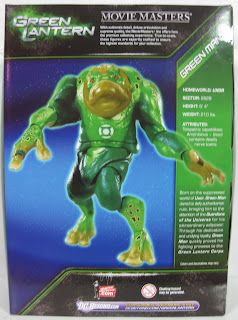 Packaging: Green Man comes packed in a larger, box version of the standard Movie Masters package. It looks really good at this size. I was a little tempted to leave him in this great-looking box, but then I saw all the other Lanterns on the shelf and realized how good the big guy was going to look with them. 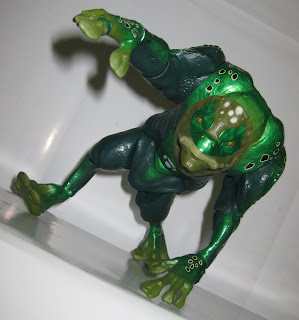 Overall: Aside from the weird hips, the figure itself is very nice. I’m not totally sold on the weird articulation they’re doing for the GL Movie Masters, but it hasn’t actually pissed me off, either. The paint and sculpting are great and he looks good standing on the shelf.
3 out of 5
What? After talking about how much I dig this figure you might wonder why the “3”. The lack of accessories – no construct or Lantern – and the somewhat high price hurt this guy a lot. If he were twenty bucks or included something he would have gotten a “4”.
Until next time, stay creepy
-Phantom
Posted by Phantom Troublemaker at 11:00:00 AM