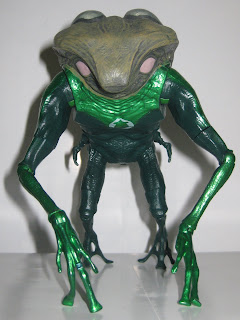 I was on the fence about these Green Lantern Movie Masters right up until I bought them.
I’ve gone back and forth on whether or not I liked them more times than I can remember. The initial pictures looked cool, then the articulation seemed too weird, then they revealed all the awesome aliens, then the paint looked weird, then it didn’t, etc. Most recently I had decided that I wasn’t going to order them online because I really wanted to see them in person before I committed to anything.
I got to see them in person the other day when I took Lil’ Troublemaker to Toys R Us on one of our father/son days. There’s this guy that works there that is waaay overly friendly but sometimes helpful that I refer to as “Bro” when discussing him because that’s what he always calls me and I hate that. “Bro” and “Bud” both drive me nuts. So Bro hit us up as soon as we walked in and said they had all the new Green Lantern stuff in. I was honestly kind of shocked because it seems like that Toys R Us never gets anything in on time. Or sometimes at all. But there it was: this giant floor cube with a ton of brand new Green Lantern movie merchandise in it – they had a bunch of the small-scale figures, the mask/ring set and some of the construct vehicles.

Note: I got the mask/ring set for Lil’ Troublemaker and the items are tiny. If you are over four feet tall these are not for you. The ring wouldn’t even fit on my pinky.
Lil’ Troublemaker wasn’t interested in the smaller figures (at least not until we actually saw them in the store), but we both liked the look of the Movie Masters. Especially once I got a glimpse of the included Parallax piece for the build-a-figure. So I bought ‘em.
First Glance: Rot Lop Fan was the one that always caught my eye. It’s a weird alien with a distinctive look and was one that I was probably going to end up buying regardless. 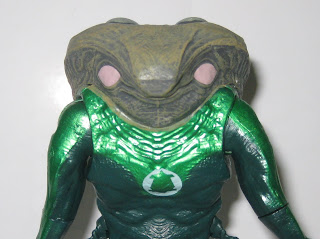 Sculpt: Rot looks pretty close to the original comic design. I guess he’s some kind of mushroom or something? As far as matching the movie design, this figure nails it. The weird head and proportions and everything look dead-on. The detailing of the muscle and limbs and fingers and toes has a very nice texture, looking more lifelike than the smooth plastic of a lot of action figures.
We’re going to be seeing a recurring theme this week (other than Green Lantern stuff, I mean) and that theme is “Articulation Fails”. In trying to make the Green Lantern Movie Masters line more organic (my assumption, not Mattel’s claim), Mattel has ended up producing some figures that look nice and play badly. Rot actually has fairly decent articulation for a strangely proportioned mushroom/turtle man (is he from Mario World or something?); with ball-jointed hips, shoulders and wrists and ball-joint analog elbows and knees. Where I feel they messed up is by adding swivels to the biceps and thighs. They look bad and are unnecessary.
The figure stands up surprisingly well. It took me a little while to figure out exactly how to position the arms, but since I did he’s stayed put on the shelf and not fallen over or even leaned. 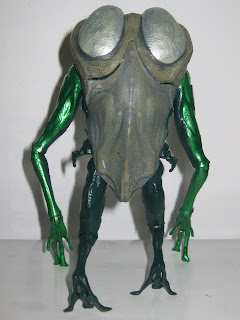 Design: The Movie Masters were all obviously designed at the same time, as they all feature the same shades of the same colors in their uniforms. It’s a nice change from the inconsistent DCUC figures and honestly a big part of what made this line so appealing to me. Being a collector, I put my stuff together on shelves. If two figures from the same group sport different shades of the same color it tends to look fucking stupid. Thankfully, the GL Movie Masters do not suffer from this defect. Rot looks great in his metallic green and darker, not-so-metallic green uniform. His exposed bits have a nice life-like quality and contrast the uniform well.
I thought his symbol was an error at first, but after checking I saw that he actually has some kind of bell shape rather than the standard lantern thing. Good eye, Mattel. I do think mine is a bit off-center, though. 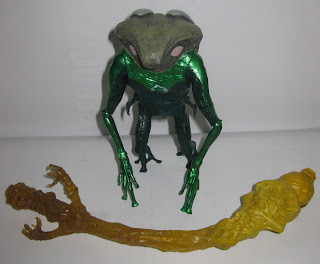 Accessories: Each retail release figure in the Movie Masters line comes with a piece of Parallax. So far I have four identical tentacles. Mattel’s ToyGoblin swears up and down that they are slightly different if you really, really look at them super close; but I think we all know at this point that he’s a dirty fucking liar. Let me repeat: I have four tentacles that are identical. And now I want to start a prog rock band called Identical Tentacles.
Other than the big, yellow skull-covered phallus (which does look awesome, by the way); Rot Lop Fan does not include anything. That Parallax piece is great and all, but I expect an actual accessory for fifteen bucks. A construct, a power battery. Something. 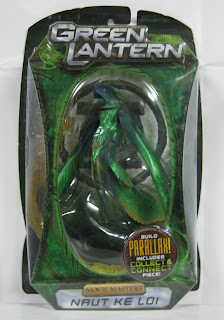 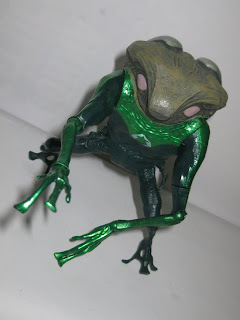 Overall: Aside from the bad bicep and thigh swivels and the lack of any real accessories I am very happy with this guy.
3 out of 5
I’d love to give Rot a 4, but reading the review over again I feel he clearly deserves a 3. But a strong 3.
Until next time, stay creepy
-Phantom
Posted by Phantom Troublemaker at 11:00:00 AM