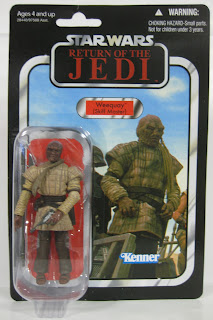 While this guy is kind of plain and we have gotten an awful lot of Jabba’s employees recently, I do have a dream (that will never be fulfilled) of having a Jabba’s Palace playset one day. And it’s going to be so fucking huge that I’m gonna need at least a hundred figures of tertiary characters and menial servants just to make it look reasonably well staffed.
Of course, this guy isn’t even from Jabba’s Palace. He’s the captain of the skiff that carries Corellians, Jedi and Wookies to the Great Pit of Carkoon so they can be Sarlacc chow. That plan didn’t work out so well. I wonder exactly how many dead guys I have standing on my Star Wars shelves.
Also, this guy’s name isn’t “Weequay” – that’s his species. But I like to think that Jabba just calls all his Weequay employees “Weequay”. As in, “Hey, Weequay! Go empty the Rancor potty!” and then all the Weequays scramble around, trying to not be the one Jabba was pointing at. 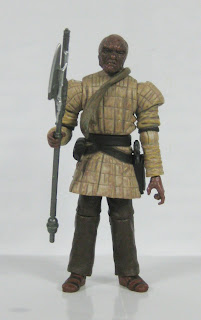 First Glance: I think “Jabba’s Palace” is probably second only to “Hoth” for immediate recognition. You can tell right away that figures are from either of those two settings more so than any other collective theme in Star Wars. Well, except for the Clone Wars figures, I guess. But you know what I mean. Anyway, as drab as this guy is it was still exciting to see a new henchman for the vile Hutt crimelord (I almost typed “slimelord” just then for some reason and had to draw this as a result:
Carry on) 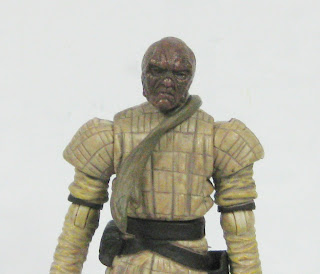 Sculpt: This Weequay has a great, ugly face. All kinds of pits and divots and things that a lesser person would make an Edward James Almos joke about. The only thing that kind of bugs me is that his braid doesn’t hang quite right. It just sort of hovers over his shoulder. It’s not terribly noticeable, but it does bother me.
His tunic has a great quilted pattern and some shoulder pads worthy of any of the Golden Girls. The pants are nice and rough looking and the holster holds his blaster perfectly. I thought at first that the figure had sandals on , which I thought was pretty cool. On closer inspection I saw that they’re just boots with straps on them and I’m a little disappointed. I’m sure the boots are accurate, but I think sandals would have been neat for some reason. I usually hate sandals. Especially on dudes. 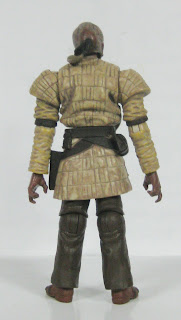 Design: I really like the deco on this guy, too. He looks very dirty and it helps him stand out as an exterior figure. He’s obviously been out in the environment. His tunic has a nice wash that highlights all the quilting. His face is detailed nicely. Overall this Weequay has a much nicer paint job than you might initially suspect. 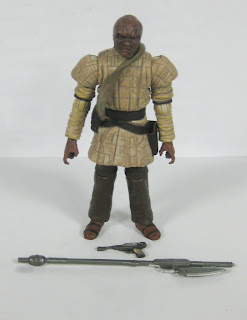 Accessories: This skiff Captain comes with a force pike and a blaster. The blaster fits perfectly in his hand or in the holster and has a couple of little details painted on. The force pike also has a couple of neat paint highlights, but is a little loose in the figure’s hands. He can hold it, just not perfectly. 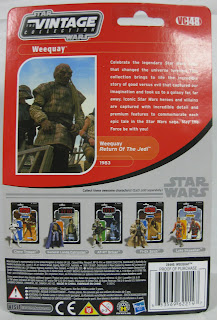 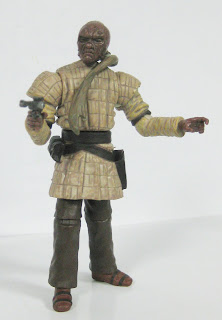 Overall: I am perfectly happy with this Weequay. He isn’t the most exciting figure ever, but he is done just right. Except for that floating pony tail.
4 out of 5
There’s no reason you shouldn’t own another unique Weequay. Buy him when you see him.
Until next time, stay creepy
-Phantom
Posted by Phantom Troublemaker at 11:00:00 AM