Toy Review – Masters of the Universe Classics: Catra By Mattel 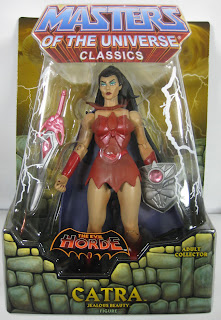 As much as I have enjoyed not having o get on Mattycollector.com for sale days (for the most part), it has left me with a stack of figures I don’t want. I’ve got a Shadow Beast, Sy-Klone, Preternia He-Man and Battle Armor Skeletor just sitting there waiting for the right moment to unload on eBay.
I had thought that Catra was going to be another one of those figures, at least until I noticed she had an Evil Horde crest on the front of her dress. I am a sucker for anything Evil Horde.
Once the Jealous Beauty arrived I opened her up, gave Mrs. Troublemaker a chance to look at her (she likes her - Lil' Troublemaker said, "She's got a kitty cat on her shield!") and went downstairs to get my pictures and formulate my thoughts. 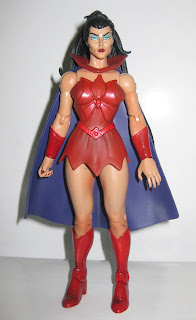 First Glance: Catra has a mean face. She also seems to have a lot of accessories. Out of all the Princess of Power figures, she probably looks the least frilly and girly and should fit in fine with the Masters stuff. 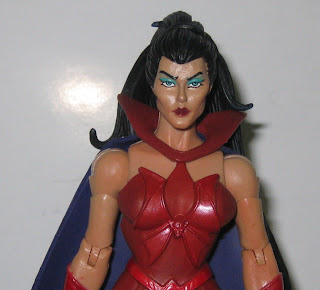 Sculpt: Catra’s face is the first thing you’re going to notice. It is very severe and clearly marks her as a villain. As a matter of fact, after reading her bio I am amazed the Four Horsemen were able to convey her character so clearly. She looks like a jealous bitch who just wants to stab pretty girls in the face. Her hair is impressive, as well. I doubt it was even an option, but I’m glad Mattel is going with sculpted rather than rooted hair. The detail on top where her ponytail starts is very cool – it’s made to look like she’s used her hair to tie it up.
Her dress is sculpted out of a soft plastic material and is separate from her body. The Horde crest on the front looks great. The dress is short enough that it only interferes with Catra’s articulation a little bit.
Catra has the standard MOTUC female body with what I think are new forearms and boots (Evil-Lyn is the only other female I have, so I’m not positive). The forearms are fairly nondescript bracers, but look fine. I really dig the cowboy boots. Catra also has a new left hand. It’s sculpted in a menacing, claw-like position out of a soft plastic. You’re going to want to be careful moving this one, as it will likely be stuck when you get it. The soft plastic doesn’t bother me (in this instance) because the hand doesn’t need to support anything.
Catra sports the same articulation as all your other Masters Classics, though her torso and hip articulation is slightly restricted by her dress. Her neck movement is somewhat hampered by her cape and long hair, but not enough to really matter. 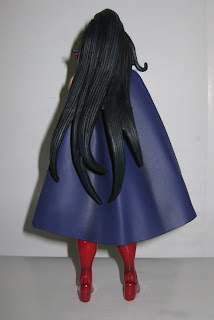 Design: The figure’s face has a great makeup job. It looks very much like the old cartoon (I’ve watched a couple on Netflix recently – I needed a Hordak fix) while maintaining realism and complementing the severity of her features.
The paint on her dress is minimal, but good. The Horde logo is way cooler than the silver thing the old figure had. Once again, Catra’s boots impress me. The color is nice and dark, with some dark highlights that really add a lot to the look. She also has painted fingernails, a small detail that I always think makes a female figure (or a Jeff Hardy figure) look much better and more realistic. Yes, I understand that not all females paint their nails, but they should. Just for me. 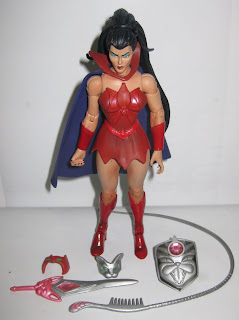 Accessories: Catra comes packed with a whip, a sword, a shield, a mask, a headpiece/tiara thing and her cape. That’s a pretty good pile of accessories.
I always like to start with the negative so we can end on a positive note (if possible), so let’s take a look at that piece of fucking shit sword that Catra comes with. 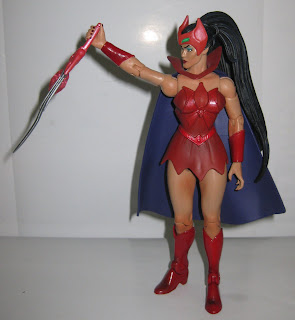 According to Mattel, they had to use the same material for the whip and the sword, so it was either going to be a rigid whip or a flimsy sword. I think they made the wrong call. A rigid whip wouldn’t have been such a big deal if it were in the right position. As it is, the whip isn’t really flexible enough to matter. It’s not like it actually lays on the ground or acts like leather or fabric or whatever. But the sword is so soft that it is ruined just by being in the clamshell tray. It is secured by one of those rubber bands and as a result of the packaging is severely warped in two places. It’s terrible. I’ve had taffy firmer than this piece of crap. I do like the jewel in the hilt and the cat face is sculpted well. The sword also has a nice paint app, but it means nothing because it is a piece of garbage.
Fortunately, the rest of the accessories are pretty good.
The whip has a comb for a handle, which is neat because the original Catra had that; but stupid because you’re going to look pretty silly trying to comb this figure’s hair. But the whip is well done except for the fact that the detail just sort of ends halfway up the whip part. It’s all nice and braided and then it just stops. It isn’t a huge deal like, say, a bendy sword; but it does bug me.
The cape and the shield are both perfect. The colors on the cape look good and the shield is just really cool and fits on Catra’s arm well. I dig the gem. 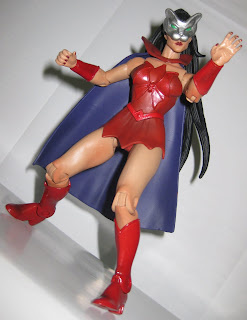 The headpieces are both cool to the point that I had a lot of trouble deciding which one to display. The one that is actually a mask is a silver cat face and looks very cool but covers up Catra’s great face. Both of these pieces have nice detail and good paint and fit on the figure’s face perfectly. 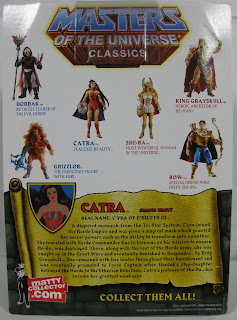 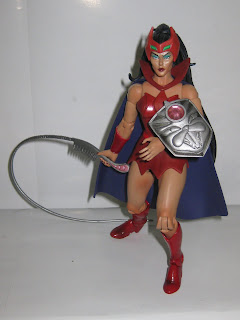 Overall: This is a very cool figure. Not a necessity, but worth keeping if you’ve got the subscription, especially given that we don’t have any other female Horde members yet. I wonder, though, if Mattel would ever consider doing Catra’s feline form.
4 out of 5
The sword really pisses me off, but other than that this is a very good figure. If you absolutely have to have one… well, you probably already bought it because Catra stuck around for a while on Matty. But if you missed her, there’s always BigBadToyStore.com.
Until next time, stay creepy
-Phantom
Posted by Phantom Troublemaker at 11:00:00 AM