Toy Review – Masters of the Universe Classics: Evil-Lyn By Mattel 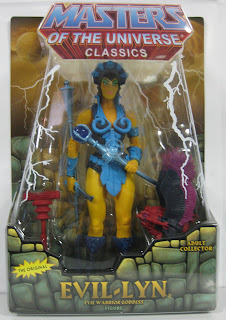 I skipped Evil-Lyn the first time around. I wasn’t as deep into the line yet and wasn’t planning on buying any of the human figures. Obviously that has since changed and I needed to get a figure of Skeletor’s main squeeze. Well, Keldor’s main squeeze. The subtext in Lyn’s bio seems to suggest that his face wasn’t the only thing Skeletor lost due to his disfiguring deal with Hordak. If you know what I mean. Apparently Skeletor and Evil-Lyn’s relationship became strictly platonic at that point, which is also when the Evil Warrior Goddess started plotting against her former beau.
Frigid (or neutered, as the case may be) megalomaniacs aside, Evil-Lyn is another character whose 200X design I find superior to the original. I’m just not into jaundiced ladies. Other than skin tone, though, she’s pretty much the same unless you’re going to give her a removable helmet.

First Glance: Like so many of Mattycollector’s products Evil-Lyn looks better in person. Her skin tone doesn’t look quite as unpleasant up close. I totally forgot she came with that bird. 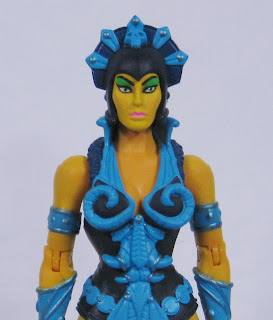 Sculpt: Evil-Lyn is the first female Masters of the Universe Classics figure I have gotten. She has the same points of articulation as the males, but designed somewhat better; probably because females need to look sleeker. Lyn’s joints are smoother and less noticeable than her male counterparts while being just as functional.
Evil-Lyn’s head sculpt is excellent. She has a harsh, narrow face under a very nicely detailed headdress. Her forearm armor looks great and is full of detail. Her boots also look very nice.
I like that Mattel made the tunic/chest piece a completely separate piece. The detailing is very good and the fact that it isn’t sculpted onto the figure gives it a higher-end look. It also means that Mattel can use the same buck for any of its females.

Design: As I said above, the yellow isn’t as abrasive in person. I love that they painted her fingernails, another detail that makes this figure seem a little nicer than your average 6” scale release.
Evil-Lyn’s face is nicely painted, with her eyes and lips centered and colored well.
Her costume is all the right shades of blue and purple with no bleeding or errors. I am very impressed that all of the little swirls and whatnot were done so well. 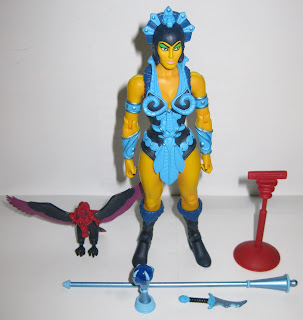 Accessories: Evil-Lyn comes packed with a dagger, Screeech (seriously) the bird, a perch (for the bird, not her) and her trademark crystal ball.
Let’s start with the crystal ball since that sucks. Well, the crystal ball doesn’t suck, but the two handles you get to attach it to do. I think it’s great that Mattel wanted to give you the option of using a shorter wand-like handle from the original line or a longer staff like the 200X series. I just wish they had chosen something other than fucking rubber to make them from. Or at the very least packaged them in such a way that they didn’t come warped. The shorter one that came with my figure is almost a “c” (oops - I threw it out before I took the pictures). Amazingly, the longer one is sort of okay; which is good because that’s the one I want to use. The paint on the crystal ball and its parts is good, but I wish the ball itself was more crystal-looking; like a pearlescent white color, maybe.
The dagger looks great and is made out of a firm plastic. I am impressed with the deco on this little item, but I wish Mattel had sculpted a sheath on Evil-Lyn’s tunic to put it in.
Screeech is the same bird as Zoar and Beast Boy’s alternate form, but with some kind of crazy laser engine armor. Much like the dagger, I am impressed with the paint on Screeech’s armor thing. The perch is red and the bird fits on it just fine. What more do you want? 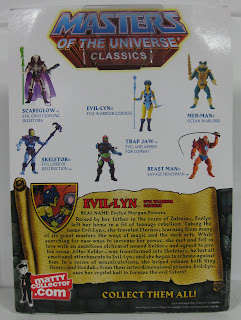 Packaging: The standard Masters of the Universe Classics packaging. It looks nice, makes the figures look even bigger than they are. You also get a bio on the back that is sort of a composite of each character’s history. I find it hilarious that Evil-Lyn’s real name is Evelyn Powers. It’s also pretty darned funny that she is supposed to be able to see the future in her crystal ball. She might want to get that thing checked. It hasn’t worked out too well so far. Just ask Skeletor. 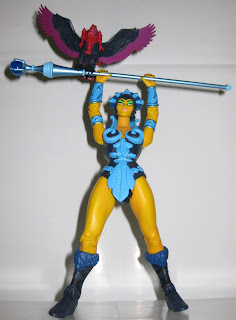 Overall: Evil-Lyn is a great figure and one of the best I have gotten in terms of looking like she should look. She is a reminder that despite all the backwards shoulders and shoddy materials used to make accessories; Mattel’s Masters of the Universe Classics line is full of great toys.
4 out of 5
The only issue of note is the material the crystal ball handles are made of. Toy manufacturers need to stop using flexible materials for things that shouldn’t be flexible. Mattel and Hasbro like to make weapons and entire limbs out of plastic soft enough that it might as well be rubber. NECA loves making feet out of soft plastic so that their figures can’t stand up.
That shit is not okay.
I am guessing that the United States’ restrictive toy safety laws are the reason for some of these crimes against toy quality. It doesn’t make sense, because I’ll tell you right now that Evil-Lyn’s stupid rubber staff will put an eye out just as efficiently as rigid plastic; but I have a feeling that’s where this all comes from. So thanks, stupid lawmakers, for giving us Stormtrooper rifles that we can fold in half. Asses.
Oh, and you can find Evil-Lyn from the usual sources – eBay and BigBad. I recommend buying her. 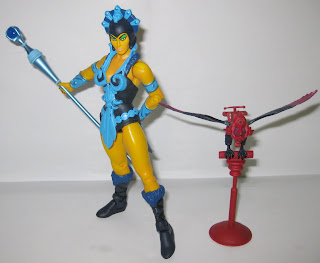