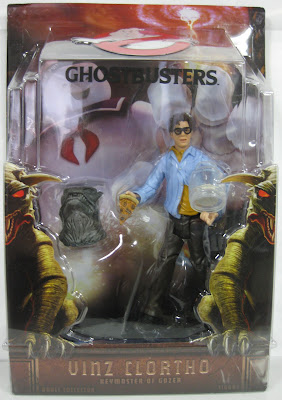 I don’t know why Mattel chose to call this figure “Vinz Clortho” rather than “Louis Tully”. Neither really sounds any cooler and people who aren’t already familiar with Ghostbusters sure as shit aren’t going to recognize the Keymaster’s moniker any more readily. And you can’t tell me that the figure is technically of Clortho because it comes with that dog statue head and he was Louis Tully again when he had that thing on. I think somebody at Mattel was just irritated by everybody thinking the name was “Vince Glortho” and wanted to get printed proof out there of the correct spelling. What a nerd.

I think I claimed that I was done with Matty’s Ghostbusters line after their half-assed Walter Peck figure. Clearly I was either lying or drunk or both because of course there was no way I was going to pass up a figure of Rick Moranis. Especially a figure of Rick Moranis with a colander on his head. I may not buy any more of the 6” Ghostbusters themselves, but there are going to be ancillary characters that I just can’t resist. I still think Mattel should have gone with my plan, though. 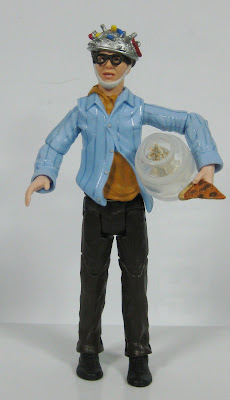 First Glance: This is the most unique release from this line so far. No matter how much you might love the Ghostbusters, the regular figures are kind of boring to look at. Vinz is exciting and different. 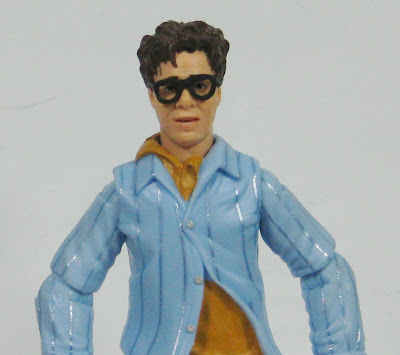 Sculpt: Vinz Clortho may well be the high mark across all of Mattel’s boys’ action figure lines. He is all new parts. Even his hands. He sports the standard articulation, sort of. His neck is somewhat limited by the fact that he has swappable heads, but there is a bit of pivoting movement thanks to the way it was designed. The neck is attached to the head and fits deep into the collar with enough wiggle room around the connecting ball that you can move Vinz’ head up and down a bit.

He is ball jointed at the shoulders and has pivots at the elbows, knees and ankles. The Keymaster also has swiveling wrists and thighs and waist as well as the trademark Mattel ball-joint analog hips. His wrists and elbows are both ball-jointed as well. 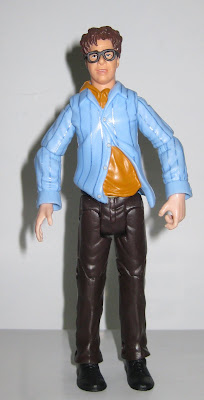 As I mentioned, Vinz is all-new parts and he looks fantastic. Everything looks rumpled and mussed, from his untucked shirt to his pants. The left side of his body is truly ingenious. It and his arm are sculpted in such a way that he can hold the included popcorn container under his arm. The arm turns inward a bit when bent and there is a portion of the shirt that is bunched up in such a way as to support the container. The truly great part is that he looks fine whether or not he is holding the popcorn. You can’t tell that the figure was designed to hold something there. Also of note is that this figure is significantly shorter than the others in the line.

The heads both look just like Rick Moranis in varying levels of bewilderment. The Tully head has messed up hair and a great likeness. Not perfect, but second only to Ernie Hudson’s as far as this line goes. The Clortho head from the Vinz Clortho interview scene is just priceless. The look on his face was captured perfectly. I really like that the glasses are an attached but separate piece. The heads remove and reattach very easily. 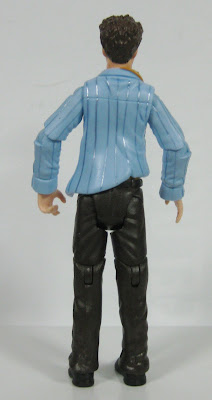 Design: The heads have tight paint applications. The Tully head is clean and the Clortho head has some wonderful detailing on the colander. What really stands out about this figure is the shirt. The powder blue part is fine, but those silver stripes are what really sell the figure. They are a metallic silver, just like Tully’s shirt in the movie. The design really makes the figure look great. 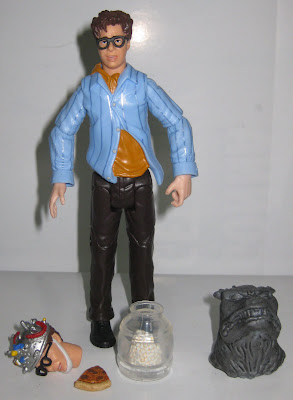 Accessories: Vinz comes with a container of popcorn, a slice of pizza and the hollow head from the dog statue. The dog head is a little underwhelming, but it is made of rubber and has a decent paint app and fits on the figure’s head; what more could you want? The popcorn container looks nice, as it is transparent and actually open at the top with a sculpted lump of popcorn inside. The slice of pizza is great and fits in the figure’s hand perfectly. 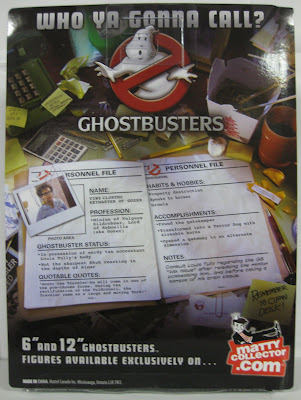 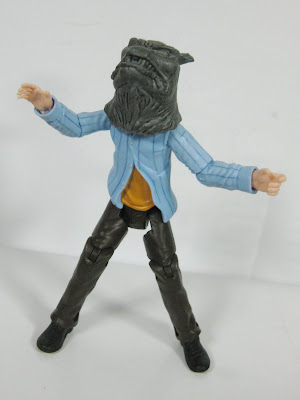 Overall: I was pleasantly surprised by this release. The sculpting is very good and the paint really couldn’t be better. You’re probably not going to want Vinz if you don’t already collect the Ghostbusters, but if you were on the fence you should definitely go ahead and get one.

As always, you can obtain this one on eBay or BigBadToyStore.com. Matty has yet to reissue any of the Ghostbusters figures, so you might want to go ahead and get one of these now if you're crazy enough to drop thirty-five bucks on a 6" action figure. I don’t know that they’ll ever get cheaper.
Posted by Phantom Troublemaker at 11:00:00 AM