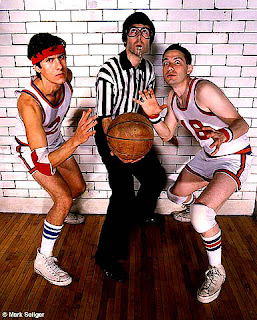 Since the Beastie Boys’ new album – The Hot Sauce Committee Part 2 – arrives today I thought I’d write a little something about the three loud Jews who were at one time my favorite band in the world.
Don’t take that to mean I stopped loving them. They’re still in my top five at any given time, it’s just that like every other band in my life they were at the top of their game years ago and some of the fondness has been worn away by the intervening years of mediocrity or lack of material. Or in the case of the Beasties; both. But don't think this is going to be bagging on the Beastie Boys. I've got a long history with them that you can read about now if you've got some time.
Actually, I have to divert for a moment to point out something kind of interesting (well, interesting to me – your mileage may very). Anthrax is another band that I loved very much in my youth. They actually alternated with the Beasties as to who I would claim as my favorite. While the Beasties maintained the same core lineup but produced albums of lessening quality after a certain point (Ill Communication), Anthrax changed lineups and produced albums that didn’t even sound like Anthrax. Then last year, Anthrax got Joey Belladonna back and toured with Slayer and Megadeth and gave me the best live musical performance I saw all year; with the promise of a new album with Belladonna this year. Also last year, the Beasties released a new single called “Too Many Rappers” with Nas and it was fucking awesome. This, too carried the promise of a new album that just happened to get delayed until 2011 due to MCA’s health issues (we’ll get into that later).

So here it is 2011 and two of my favorites are back in full effect. So to speak.
But today we’re here to talk about the Beastie Boys and how they’ve been a part of my life for twenty-five years.
Like most folks, the first time I ever saw the Beastie Boys was the “Fight For Your Right” video. I guess I was around ten at the time and I’m sure I didn’t really know what to make of it, but I knew I liked it. It helped that they were pals with RUN DMC, who were already favorites of mine.
The first money I ever spent on music was in 1986 when I went with my family to what I think was one of the first retail membership places – Makro. They had cassettes of the Beastie Boys’ Licensed to Ill and RUN DMC’s Raising Hell. The latter was available with a pink and aqua cover or a purple and green cover. Even at that young age I knew which color combination my destiny entailed. I don’t know how I got away with buying something called Raising Hell, but I did and those two cassettes dominated my silver Walkman for probably the next year.
My favorite songs on Licensed To Ill were “Paul Revere” and “Time To Get Ill”. I mean, every song on that tape was awesome and I listened to it from beginning to end every time; but I knew every single word of those two.
And the next year was when I got to see my very first live concert.
In 1987 my family got relocated to Houston, Texas for the summer. My dad’s company sent him there to learn about something or other from another company and the rest of us had to go, too. Being 11, I really did not want to go. I was wise to feel that way. Houston is an utter craphole with the worst weather I have ever experienced. The humidity is so bad that the second you step outside you are covered with a thin, never-drying layer of slime. It’s revolting.
My parents knew I wasn’t happy about it and I think my mom wasn’t exactly thrilled either. As a result I think I was slightly more spoiled than normal for that miserable three months. Which Is how I got to see the Beastie Boys and RUN DMC live at the Houston Astrodome despite my parents hating rap music and pretty much anything else on MTV. 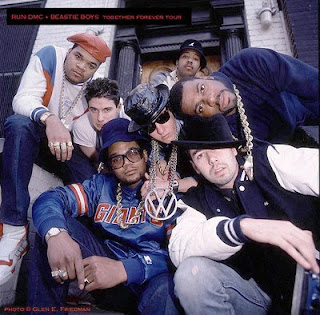 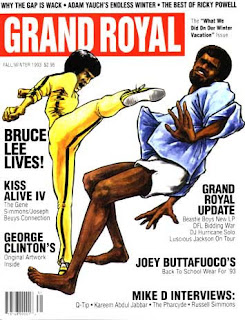 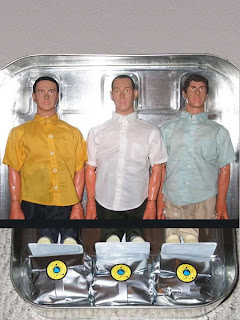 The very next year the Beastie Boys released what is probably one of the best greatest hits albums I’ve ever owned. The Sounds of Science featured a perfect mix of original hits, remixes, b-sides and previously unreleased tracks. I guess it isn’t so much a greatest hits collection as a career retrospective, but whatever. If you don’t own a Beastie Boys album (which I find utterly unthinkable) this is the one you should own. I have to listen to both discs in their entirety every time I even think about it.
And sitting here thinking about it, I’ve just remembered that “She’s On It” from the Krush Groove soundtrack is included on The Sounds of Science. While it’s a fun song and a nice discovery from early in the Beasties career, it’s not nearly as interesting as the other thing I just remembered: the movie Tougher Than Leather that starred both RUN DMC and the Beastie Boys. Holy fucking shit.
I would do a whole post on this movie if I could find a copy of it.
The Beastie Boys Video Anthology was released by Criterion the year after the audio version. It’s very well done and a technical masterpiece, but lacks any Licensed To Ill-era material. I used to have a VHS with all of the Licensed To Ill videos, as well as She’s On It and some tour footage, but that got – say it with me – destroyed in the flood (no, I will apparently never run out of articles that bring up things that got lost in that fucking event). The Criterion release came out at a time when the Beasties were being all sensitive and ashamed of their origins (as opposed to now when they’re exploiting them, much to my and everybody else’s delight) and didn’t want to acknowledge the dark past of the Don’t Be A Faggot years. If you don’t know, that was the working title of Licensed To Ill until their old drummer – Kate Schellenbach – told them that might be just a wee bit offensive to certain people that might happen to be homosexual like, oh, say herself.
I will say that having seen some of the behavior on that VHS and in person I’m not totally surprised by their shame. As outrageous as Licensed To Ill is, the life the guys were leading at that time is waaay more ridiculous. I’m not sure I’d want to revisit that, either. But it does seem silly to not include the videos at least.
The Beasties took nearly four years to release their next album, the politically-infused To The 5 Boroughs. Much like Hello Nasty, I didn’t like it at first. Unlike Hello Nasty, I still kind of don’t. While I appreciate the stances taken on previous albums concerning Tibet and firearms and violence against women; I don’t want a whole lot of political outrage from the guys who penned “Brass Monkey”. And To The 5 Boroughs was just too much for me. Not so much that I don’t like the album, but enough that it never really clicked with me. I do love “Ch-Check It Out”, “Crawlspace” and “Triple Trouble” as much as any other Beasties tunes and I appreciate the fact that the album is a love letter to their native New York in the wake of 9/11. It’s not that the album isn’t good, just that so little of it is any fun. I’m no fan of Dubya, but the Bush bashing was already old when To The 5 Boroughs dropped; now it just makes the album dated and stale. It does make laugh a little though – I’m fairly certain Licensed To Ill would be one of that guy’s favorite albums. 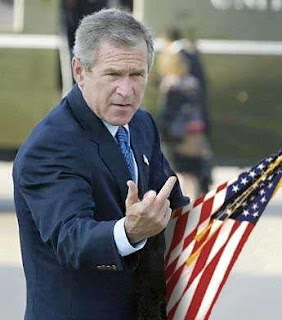 So the past few years have not been as full of Beastie love as many others in my life. I still listen to the albums frequently – even 5 Boroughs – and they’re still one of my favorite music acts, but there just hasn’t been anything to get excited about.
A couple of instrumental albums have been released – The In Sound From Way Out and The Mix-Up. I’ve never bothered with the former because it’s just a collection of tracks from other albums. The Mix-Up, however, is another story. I really dig this one a lot. As a pet project, I’ve made a couple of different playlists using 5 Boroughs, The Mix-Up and Aglio E Olio to try and make a more Check Your Head/Ill Communication-ish album out of the three. I’ve got a couple I like.
In 2009, the Beastie Boys had a message for hip-hop, and you knew they were serious because they brought Nas with them:
That’s right, fucking Nas. Too Many Rappers was an outstanding surprise. The beats were that weird mix of fresh and old school; similar to what Jay-Z managed with “99 Problems”. Nas was of course on point, but the Beasties threw down as well. All of the trademark silliness was intact, as well as some outstanding disses towards current hip-hop.
It was announced at the time that a new album would be dropping in 2010 and I couldn’t have been more excited. But then in July MCA announced that he had cancer and that the album would be delayed as a result. This crushed me. Not because of the album delay, but because Adam Yauch is one of my heroes. 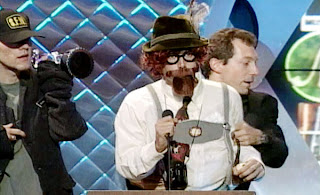 Adam Yauch, aka MCA, aka Captain Crunch, aka Nathanial Hornblower was the coolest Beastie Boy from the start. He was the guy with the stubble and the leather jacket. Then he was the guy that got spiritual. And the guy that started supporting noon-violent causes. And the guy that directed a bunch of videos and eventually a fantastic documentary about basketball (Gunnin’ for That #1 Spot). In short, MCA was the guy that grew and pursued things and wasn’t ever afraid to be different. And I love that kind of guy. So it upset me a lot when I first heard about the cancer.
But the man stayed positive and kept the fans informed and he got treatment and became a vegan and seems pretty okay now.
And then this happened:
And gave the whole internet a giant, raging boner for the Beastie Boys.
While it is an awesome clip, followed by an awesome video:
Not only all that, there is more to come. This is only the first part of a thirty minute short film called “Fight For Your Right Revisited” and I cannot wait to see the rest (I have now and it is outstanding - came with the download). Anybody else notice that thing on top of the DeLorean is a breakdance mat?
I think it is important to look beyond all the celebrities and realize that the song itself is fucking amazing. It has been stuck between the back and front of my brain ever since I heard it, permeating my thoughts on some level at all times. I don’t know that even “Intergalactic” was as catchy and instantly wonderful as “Make Some Noise”.
I will have Hot Sauce Committee Part 2 by the time this posts and will hopefully have a review for Friday (I’ve got something special planned for Cinco De Mustache).
Until next time, stay creepy,
-Phantom
Posted by Phantom Troublemaker at 11:00:00 AM