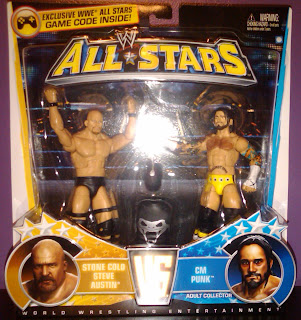 The other day my intro mostly explained why I even bought two sets of figures from this line when I don’t really collect wrestling figures anymore. Today, I’ll tell you why I’m excited about the game they tie in with.
I’ve been playing wrestling games for years. And I’ve gotten suckered into buying at least one WWE game a year for the last eleven. Some were outstanding and got played until the next iteration was released or even longer (WWF SmackDown: Shut Your Mouth for Playstation 2). Some were absolute crap (WWF: RAW for XBOX). The last one – WWE SmackDown vs. RAW 2011 – is very, very good. I just don’t ever play it. I used to get so involved in games that I would book storylines. Like, I literally had a booking sheet that went months in advance so that I could plot feuds and title wins and stuff. It was a little crazy. But I enjoyed my fantasy booking and had the time to do it and play the matches.
I don’t have the time to devote to wrestling simulations anymore. I can play a quick match here and there, but I just can’t get involved with a full-on season mode. Which is why I was so interested when this was brought to my attention a few months ago:

It looks like big, arcadey fun that you can just pick up and play. And that is exactly what I need. Especially when you throw in a roster that includes Legends and current Superstars. I was always resistant to the idea of Legends in the other games because I never used deceased or retired wrestlers. I didn’t want a roster slot taken up with the Bastion Booger if it meant they were going to leave out a guy like Paul Burchill (for example).
The character designs are exaggerated caricatures in the style of Street Fighter and the moves are ridiculous and explosive, exactly the kind of over-the-top thing I love. I’m not saying I totally buy that this game is going to be the quality fun-fest I’m hoping, but I plan on spending the money to find out. 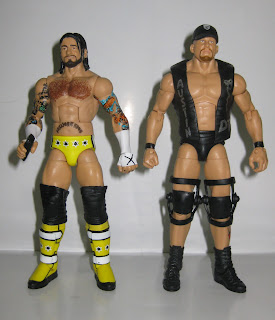 First Glance: This was actually the set that caught my eye. CM Punk is my favorite wrestler working right now, so anything with him on the front catches my eye. My first instinct was that the Punk in this set looks better than the Elite release that I already own. The Austin figure seemed to be really good as well. 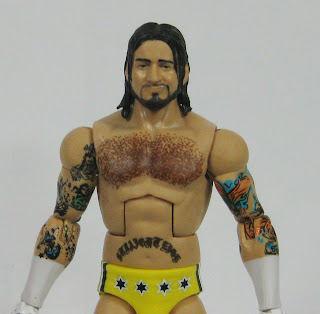 Sculpt: (cut and pasted from the Savage/Morrison review for obvious reasons) Each figure sports articulation at the neck, shoulders, upper biceps, elbows, wrists, upper abdomen, waist, hip, knee, upper calf/boot top and ankle. That’s great, but what really makes these figures so impressive is how the functionality of each point of articulation works with the aesthetics of the figure. I’m also amazed at just how many different body styles Mattel is producing. If you look at the physiques on these figures they are massively different from wrestler to wrestler. This is a far cry from the days of JAKKS when Rey Mysterio would have the same torso as Triple H. And they would be the same height.
The textures on these guys is great, too. Fabrics and skin and hair all have different feels and looks to them, which really makes these things more lifelike. This is one feature that I wouldn’t really want carried over to Mattel’s other lines. Comic book and cartoon guys should look like comic books and cartoons. 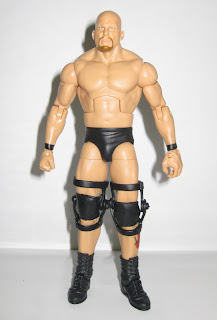 The shoulder/upper bicep joint is sculpted in such a way that it blends with the figures’ musculature but doesn’t create any ugly gaps like the DCUC and MOTUC figures have. The elbows are not double jointed, but the joints are deep enough that you can still bend them more than the typical 90° or less. The wrists both swivel and pivot. The joint on the abdomen has a wide range of motion and is sculpted and fitted tightly enough that it doesn’t detract from the figures’ smoothness. The waist is a simple swivel, but the circumference of the abdomen and crotch have been rounded and matched well enough that you don’t get as strange a look as most figures do when you rotate the joint. The hips are done the same as most higher-quality 1/6th scale figures (and MOTUC) – there is one piece jointed to the crotch and another that connects to the thigh on a swivel. This provides the same range of motion as a ball joint or the DCUC swivel/hinge method without the gaps of the ball joint or the ugliness of the DCUC hinge. The knees are double-jointed, but the effectiveness of this varies depending on the figure’s accessories. The boot-top swivel is done so well you can’t even see it. The way the ankles are jointed is also lifted from 1/6th scale/MOTUC figures. There is a deep pivot point that connects the ankle to another pivot point on the foot. This provides a wide range of motion front-to-back and side-to-side. Thankfully, Mattel avoided toe articulation. I have exactly one 6” scale figure in my entire collection that this actually works and serves a purpose on (Ryu from Ninja Gaiden, if you were wondering).
Now, onto specifics (and new content). 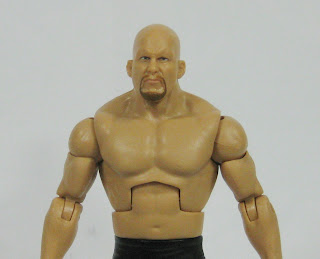 Austin has a beefy but not cut body. To keep with my trend this week of slamming JAKKS Pacific, they made exactly one Austin that wasn’t way too cut. It was the R3 Tech release. To JAKKS credit, this was actually a great line of figures that employed full facial and body scans and kept the figures in scale with one another. But anyway, this Austin’s body type looks great. The head sculpt is the best Stone Cold I’ve seen at this scale. Austin’s likeness must be hard to capture in plastic, because the only Austin figure I’ve ever seen that actually looked spot-on (aside from this one) was a 1/6th scale version that JAKKS produced in limited quantities. I like the way Mattel sculpts trunks on these figures. They’ve managed to make them look like actual wrestling trunks rather than little underpants. This is mostly due to the sort of butt-flap thing on the back. The trunks hang down over the top of the thigh in the back and just look a whole lot better than if they are shorter. Mattel is also doing a great job with boots. Everybody’s boots are different and Mattel is respecting that. Austin has a shorter boot with the swivel at the top. His knee pads and braces are nothing short of amazing, but we’ll get to them in the “Accessories” section. 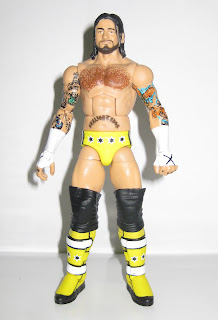 Punk’s body is similar to Austin’s, but leaner. His head sculpt is not perfect, but looks good. I think his face needs to be a little thinner. His smirk is spot-on, though. His hair looks like it should and he has the hoop through his lip. Punk has the same knee pad issue as the other figures in this line – they restrict his double-jointed knees. His boots are great. They’re nice and thick, looking like kickpads should. His ankle joints function nicely and he has the same invisible swivel at his boot top that everybody else has. I don’t like the fact that his wrist tape is painted on, but at least the paint app is solid and looks good. I guess if his were sculpted and nobody else’s were it would be even stranger. 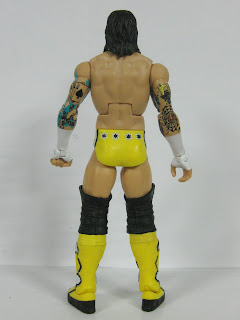 Design: CM Punk is one of the best-decorated figures I have seen. His trunks and boots are bright and tight. The colors are good and the paint apps don’t stray or blotch. This version has painted-on chest hair since he is supposed to be a heel here. It looks a little strange, but okay. As much as I like the flocked George “The Animal” Steele that JAKKS produced, it would be weird on anything other than a novelty figure. Obviously Punk’s tattoos are important; and Mattel absolutely killed it in this category. Not only are they accurate (or as accurate as they can be while avoiding copyright infringements), Mattel did not shy away from placing them over and inside of joints. It really looks amazing. So much so that I took a couple of extra detail pictures: 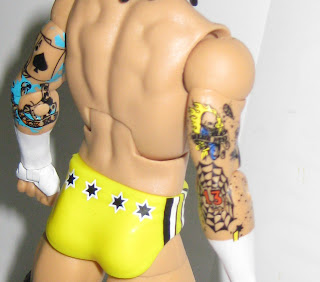 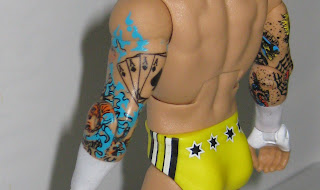 Great job, Mattel. I wouldn’t be surprised if this ends up being the best detailed figure I see in 2011. 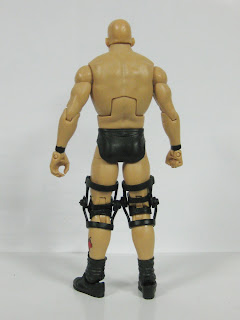 Austin requires a whole lot less effort than Punk. His blue eyes are centered and look good. His trunks and boots are black, so way to go there. The only really noteworthy thing is the Texas tattoo on Austin’s left calf. It’s there and it looks good. 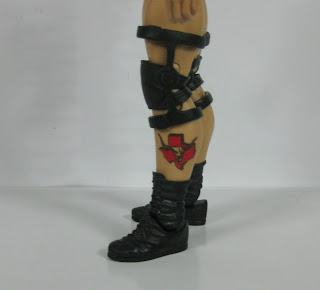 I thought it was a little too big at first, but after checking I found out I was wrong. 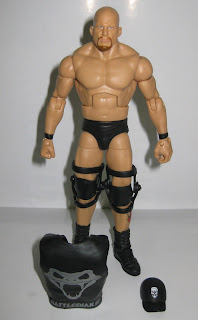 Accessories: The set comes with Austin’s hat and vest and a pair of clippers. Yes, hair clippers. The vest fits great and is easy to take on and off. The paint on it is simple but solid. The hat fits on Austin’s head and looks just a little weird, but still better than most headgear you get with toys this scale or smaller. The logo on the front is detailed and amazingly centered. 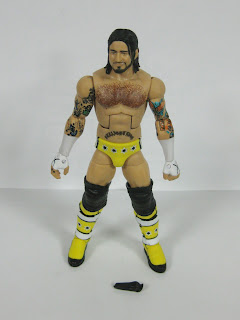 The clippers are, well, clippers. I suppose they could have painted the tines silver, but I’m going to have to go with “Why bother?” on that one. I might get bored and do it someday, though. Also of note are Austin's knee pads and braces. They look great - not oversized like they've been in the past - and do not interfere with the knee movement much at all. The braces are actually hinged and look great. 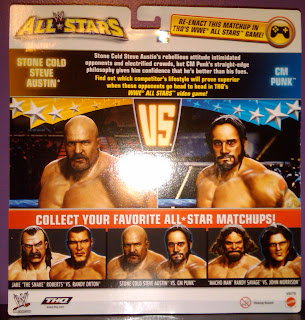 Packaging: Like I said, the packaging for this line is eye-catching. The video game representations of the wrestlers (which I love) make you stop and check out the sets to see what the heck is going on. Each set also includes a different cheat code for the game. Granted, these will all be online thanks to people like me – this set’s code unlocks alternate attires for Punk and Austin and is

D,L,U,R,R,U,L,D at the Main Menu screen
But it’s still neat that they threw something in like that. 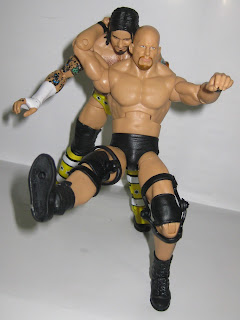 Overall: Just like Savage and Morrison, these are two great figures for a great value.
5 out of 5 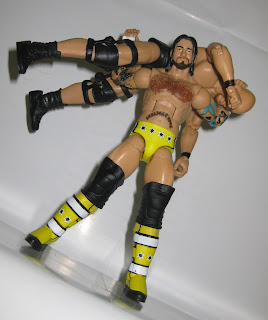 I know most of you probably couldn’t give a flying burrito about wrestling figures, but if you can come up with even one wrestler you wouldn’t mind owning from Mattel’s Elite collection you owe it to yourself to pick one up. Any action figure collector should be able to appreciate the craftsmanship that has gone into these. Between Mattel’s Elite and Legends collections you should be able to find a spot on your shelf for one of these great toys. Avoid the Entrance Greats and Signature Moments, though – the figures I have bought from those two lines do not have the Elite body style. This is more in keeping with what we have come to expect from Mattel, given that the EG series retails for $20 and the SM go for $23 and don’t even include the musical stand (seriously!) that comes with the Entrance ones. They’re a fucking rip-off.
Until next time, stay creepy
-Phantom
Posted by Phantom Troublemaker at 1:00:00 PM