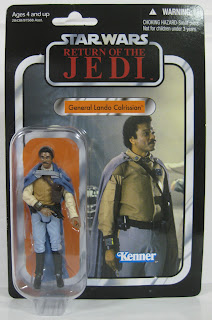 There have been surprisingly few Lando Calrissian figures lately. And shockingly, by “lately” I mean in the last ten years. The closest thing we have to a good modern era 3 ¾” scale Lando is the last Original Trilogy Collection version with the awful swivel elbows. The rest of the figure still looks really good, but those swivel elbows are the shits.
You really only have three (maybe four) options for a Lando, though – the Empire version, Jabba’s Palace disguise or Alliance General (the maybe comes from the possibility of an Expanded Universe version; which is unlikely). All three looks are very cool and instantly recognizable so I’m not too sure why Hasbro hasn’t cashed in on them a lot more.
Anyway – today’s subject is the brand new General Calrissian from the newest wave of Hasbro’s Vintage Collection. I’m always happy to add some Alliance leadership to my collection and when the character happens to be an outer space hustler as well; obviously that’s just great. 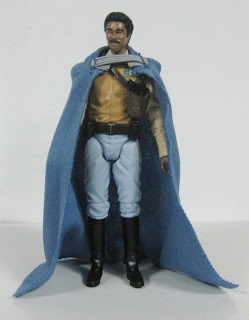 First Glance: I immediately loathe the giant piece of elastic across this figure’s throat. I almost didn’t buy it because of that horrid monstrosity. 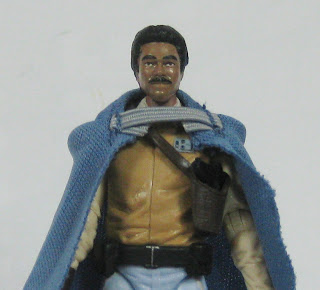 Sculpt: Sculpt-wise this is the best Lando likeness I have seen at this scale. It isn’t great, but I think you could tell it was Billy Dee even without the body and name tag.
Lando has some very impressive articulation. He has a ball-jointed neck, shoulders, elbows, knees, ankles and hips(!). That’s right – no pivoting hips here! Lando also has a swivel waist and wrists.
The figure’s tunic has some nice details on it that keep it from being plain and the belt and pants look nice. He also has some sort of wrist apparatus on his right wrist that breaks up any possible monotony.

Design: Lando’s eyebrows are too big. It makes him look a little more like General Pryor. The rest of the paint on his head is solid, though. A far cry from the black dots for eyes on the last iteration of this figure.
His uniform is basic and clean. The stripes on his trouser might be a little off. I’d like his lower legs turned just a bit further out. There is some nice detail on his wrist gadget. The big paint problem is that once again Hasbro has given us ankle joints that are a different color from the rest of the foot. This is absolutely inexcusable in a line aimed at adult collectors. Honestly, it’s unacceptable for any line because it would have pissed me off when I was a kid, too; but when you’re paying nine or ten bucks for one of these I expect a bit more. 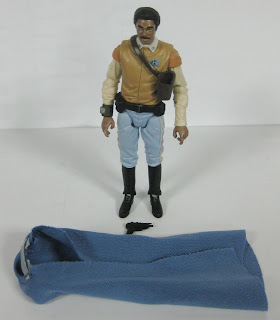 Accessories: Lando comes with a cloak, a shoulder holster and a blaster. The blaster looks fantastic, has a ton of detail and fits snugly into the holster. The holster is plain and brown but fits the figure well and does everything it needs to do: hold the blaster.
The cloak is a nice material that hangs well on the figure, which is always impressive at this tiny scale. It has clever seams at the shoulders to keep it draped properly. The problem is that giant fucking piece of elastic. It looks terrible. Hasbro has utilized other methods to fasten cloaks in the past, I can’t imagine why they would have done this to a character who is ostensibly the male fashion plate of the Star Wars galaxy. I’m seriously considering attempting some kind of fix for this. After I color in his ankles. 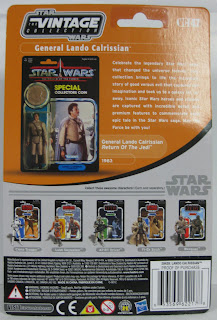 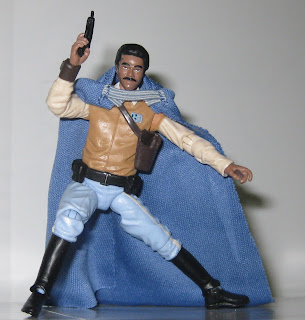 Overall: I have to say I’m a little disappointed in this guy. All the little things that are wrong really soured me. He isn’t a bad figure – just flawed in a couple too many places.
3 out of 5
I doubt we’ll get a better General Calrissian any time soon, so go ahead and pick this one up if you have to have one. Otherwise, if you just want a good Lando, find the old OTC version. Despite the shit elbows he’s far better than this one. And I imagine we’ll be getting Lando in disguise sooner than later.
Until next time, stay creepy
-Phantom
Posted by Phantom Troublemaker at 1:00:00 PM