Toy Review – Masters of the Universe Classics: Panthor By Mattel 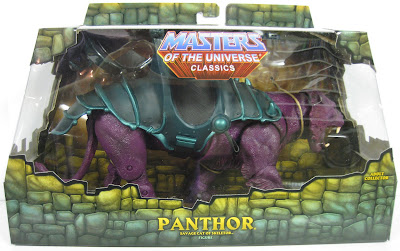 Panthor is the reason I ordered the re-release of Battle Cat.
I’m not partial to cats. Well, that’s an understatement. I like cats about as much as politicians like the truth. But I knew I was going to have to have Panthor whenever he got issued (because c’mon – purple and green) and I would feel stupid if I had Skeletor riding his big purple cat and didn’t have the comparable mount for He-Man.
I was fairly satisfied with Battle Cat, but I did feel like there was room for improvement. Let’s see how the clowns at Mattel did on this one… 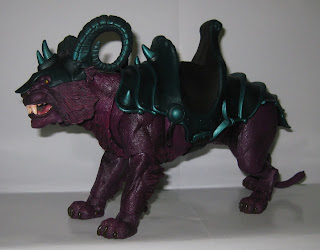 First Glance: I still feel like thirty bucks is more than fair for this class of figures. Panthor looks cool in the box. 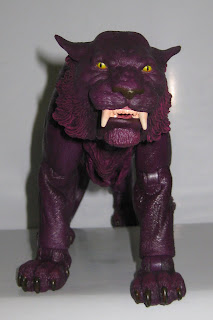 Sculpt: Panthor’s sculpt is exactly the same as Battle Cat’s, which is a bit disappointing. I’m fine with the body being the same, but I was kind of hoping for a slightly different head. Well, the head is slightly different in that the Panthor’s neck joint is better than Battle Cat’s – Panthor can actually hold his head up, even with his headgear on.
Just like Battle Cat, the sculpt and articulation on this guy is fantastic. The fur looks very nice and he has all of the range of motion you might want. Panthor’s neck isn’t the only joint that is tighter. Pretty much all of the joints feel better than what Battle Cat has. 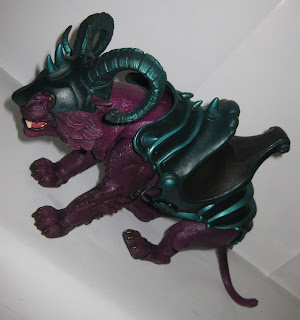 Design: Panthor is purple. There’s not as much call for shading and striping and whatnot; but what was done with the paint applications look good. His face is clean and his teeth and eyes are all detailed and painted as they should be. 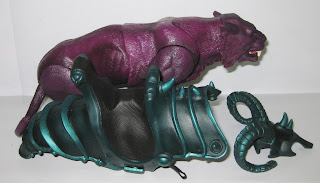 Accessories: Panthor comes with the exact same saddle as Battle Cat. It looks great, but a little variation would have been nice. I’m sure the two cats shared the same saddle sculpt in the original line, but I was hoping for just a bit more. The paint on it does look fantastic, though. The dark green with the shading really contrasts nicely with the cat’s purple color and the bronze rivets look great. The saddle comes off easily and stays in place when it is fastened onto the beast. 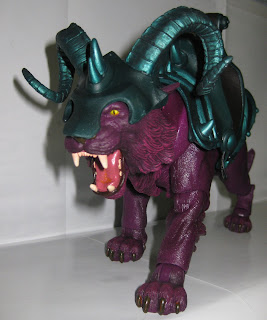 The headgear is where Panthor gets truly awesome. First of all, it’s giant horns on a mask that goes on a cat. Just the concept is awe-inspiring. But there is also the fact that, unlike Battle Cat’s, Panthor’s headgear actually stays on! Amazing! Between that and the neck issue, Battle Cat’s head seems downright defective in comparison. 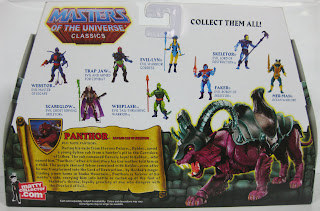 Packaging: Panthor comes in a big ol’ box that is very reminiscent of his original packaging. It is a the same design that was used for Battle Cat and probably won’t be used for anybody else. It looks nice and will naturally fit in with the rest of your MOTUC collection if you’re not an opener; though with this line you’re really missing out if you’re not opening them up. 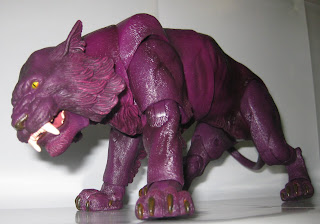 Overall: This beast looks fantastic and does everything it should. It’s so good I’m tempted to open my Battle Armor Skeletor just so he can have a rider. I wish Battle Cat had been this much of a success. If Mattel could have managed just a slightly different face for this guy he would have gotten a perfect score.
4 out of 5 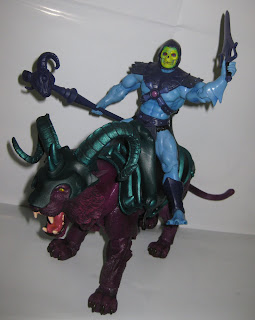 I feel like this review is a little sparse, but this is basically the same toy as Battle Cat. Just not that much to say.
As always, Panthor is available on BigBadToyStore. You’ll pay a premium, but I have no idea if or when Matty will reissue him.