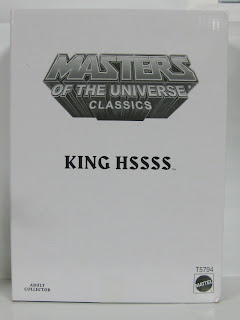 King Hssss is one of the Masters Classics that I was truly excited about receiving. As a matter of fact, March was a pretty good month in general for Mattycollector.com. The other Club Eternia figure was Battle Armor Skeletor and the site was also offering Vinz Clortho and a reissue of Evil-Lynn.
I also participated in the grueling hell that is trying to buy something from Matty at noon for the first time in months. I wanted another King Hssss to display with his snake torso. The problem with this was that Mattycollector’s website sucks. But this is always a problem; no – the issue this time around is that I had to try and order from my phone while sitting in a bathroom stall due to circumstances beyond my control. Needless to say, I didn’t get that second King Hssss. I did get Evil-Lynn and Vinz Clortho though. The reissues and the Ghostbusters tend to stick around for several days after they are initially offered (they might even still be available as I write this, though likely not as you read it).
I’ll have Lynn and Vinz reviews up soon, but Battle Armor Skeletor is going in the eBay stack. He’s cool and all; I just don’t need him. Drop me a line if you’re interested. I’ve decided I’m just going to sit on the MOTUC releases I don’t want for about three months before trying to sell them. It seems to take about that long before they have any demand. 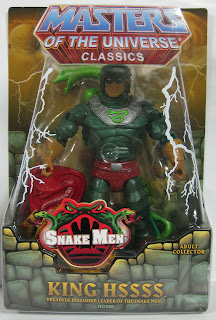 First Glance: King Hssss is one of those figures that the 200X line has kind of spoiled for me. That design was so cool that this one seems kind of bland in comparison. Not bad, just plain. The first thing I really noticed about this guy was how small his snake body seems, though. Maybe it will be more impressive after I unpack it. 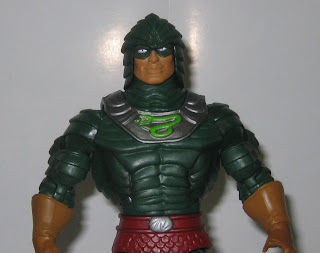 Sculpt: King Hssss is the victim of yet another assembly issue. Like Roboto and apparently the first run of He-Man, His Snaky Majesty’s shoulders are on the wrong sides. This is absolutely fucking ridiculous. Mattel has got to get their shit together on this line. I do not understand how a line as fantastic as the WWE Elite Collection can come from the same company as DC Universe Classics and – to a lesser extent – Masters of the Universe Classics. To have the kinds of quality control issues that the two latter lines consistently experience is unimaginable from a toy company the size of Mattel.
That being said, I never would have noticed the shoulder issue if I hadn’t seen it in the Mattyforums. Even looking at comparisonsfrom people who have fixed the problem I can barely tell. So while I don’t care, it still isn’t okay. Especially given Mattel’s “Oh, well – what are you gonna do?” attitude. Of course, we facilitate that attitude by continuing to throw them our dollars.
Anyway. King Hssss has the standard MOTUC points of articulation. Mine all work just fine, including the shoulders. Hssss uses the same torso and crotch as the other male releases and has the standard “Bad Guy” calves. I believe his forearms are new, and the rest of his arms certainly are; as well as his upper legs. His ridged armor looks really cool and is placed in such a way that his joints don’t detract from the uniformity. I also really like how Mattel created that look on Hssss’ torso – they made a separate piece that fits over his chest and abdomen without interfering with the abdominal joint. Hssss also has scaly overpants that look pretty cool, but I think they might look better if they were a separate piece like Bow’s.
His head looks super creepy. The way the scale armor is done gives him a very snake-like appearance. King Hssss has this smirk on his face that is very in keeping with his character’s superiority complex (he’s basically Serpentor, but an actual snake). I’m not sure if this is intentional or not, but the sculptors managed to make the face look like a mask without being expressionless. I like it. 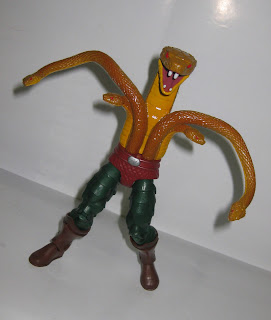 King Hssss’ alternate torso and head look awesome. The original figure actually had a break-away torso that revealed the snakes inside; for the Matty release we got two totally separate torsos that attach via peg to the figure’s waist. The connection point is a little loose. I accidentally knocked the humanoid and snake torsos off several times over the course of taking pictures. The snake torso is made of a rubbery material and has bendy “arms” that hold a pose well. The main head has a hinged jaw. I like that they did this, but it is difficult to operate due to the materials being sculpted in that rubbery stuff. I also feel that the snake torso should be just a bit bigger. 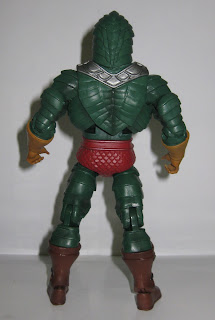 Design: Well, this guy is pretty much just green. It’s a nice, metallic green and the shading looks very nice around the ridges. The paint on his collar piece looks good and didn’t bleed anywhere else. Something about the paint on his face looks weird. I’m not sure exactly what. Maybe it’s that it is supposed to look like a mask.
The snake torso is painted very well. There is all kinds of detail and shading and it looks far superior to the original release. 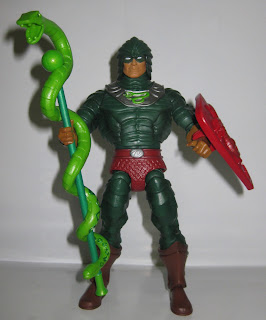 Accessories: King Hssss comes with a snake staff and a shield. They both look fine and have some nice, metallic detailing on them. The King can hold the staff in a couple of different ways and the shield fits fairly well onto his arm. I’m always a little concerned about how the MOTUC shields fit, though (and the original series, for that matter). When the plastic turns that whitish color due to stress from expanding to fit on whatever it is supposed to fit on, I get nervous. I forgot to mention it at the time, but the Eternian Palace Guards’ and He-Man’s shields do this as well. 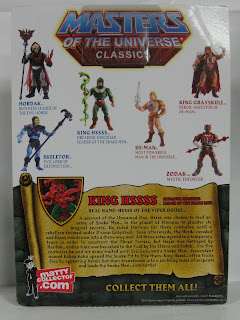 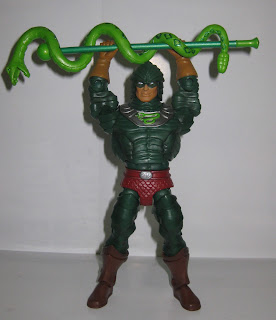 Overall: This is pretty much exactly what you might want out of a King Hssss figure knowing that the Overlords at Mattel have pronounced the 200X style of toys officially dead. Despite the fact that I personally don’t care and can barely tell, the shoulder issue is inexcusable. I’m also not crazy about how loose that peg is that connects the torsos to the waist is.
3 out of 5
I like King Hssss’ figure, he just has some issues that wouldn’t be as big a deal if we weren’t paying a premium for this line. All in all, I think I’m okay with the fact that I didn’t get that second one. He went on sale again on 4/1 because Matty had yet another problem with getting their product in on time and I didn’t bother trying to order one.
You, however, can get your greasy little mitts on this Snakeman by way of eBay or my personal favorite source of toys; BigBadToyStore.com.
Until next time, stay creepy
-Phantom
Posted by Phantom Troublemaker at 4:03:00 PM