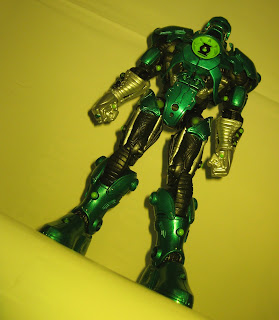 Stel is the collect-n-connect figure for Mattel’s Green Lantern Corps Series 2. He is also the main reason I bought G’Hu. Which is, of course, why companies produce build-a-figures. They want you to spend money on stuff you don’t want.
I wanted Stel because I’ve always loved the fact that there’s a straight-up robot Green Lantern. He’s played a major role in a couple of storylines and I’ve been wanting a figure since the first time I saw his rebuilt body. 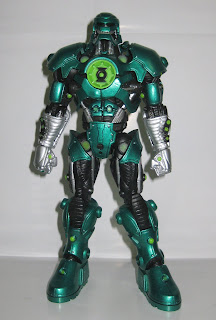 First Glance: Just looking at the pieces tucked into the rest of the figures’ blister cards it was obvious Stel was pretty detail-intensive; not to mention how big he was going to be. 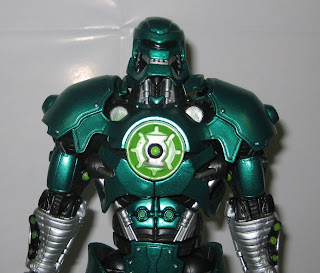 Sculpt: Amazing. Too many wires and plates and circuits to even take in. Stel is articulated with ball-joint shoulders, hips, abdomen and neck. He has pivoting elbows, ankles and knees and swivel wrists. His ankle joints have that double mechanism that allows his feet to move front-to-back and side-to-side. This is becoming essential for larger figures. His Green Lantern symbol looks awesome and there is a corresponding shape on his back that just looks cool. 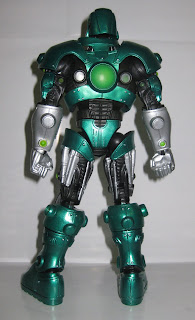 Design: The metallic paint on this figure is fantastic. His face has some great detail and the white on his symbol and the thing on his back is bright and clean. Despite being a big bundle of wires and stuff, Stel’s different colored areas are clean and well-defined.
Accessories: I suppose Stel is an accessory. Or at least, all his parts are. You know what, I don’t care if he is a c-n-c; he should have a Lantern and a construct.
Packaging: I like the GLC packaging quite a bit. Not only is it a nice break from the yellow DCUC look, The blisters themselves have a new and interesting shape. Not to mention the holes punched in the side that allow you a nice pre-purchase whiff of that sweet, sweet New Toy Smell. 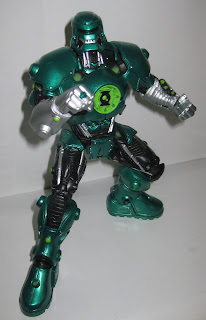 Overall: I love this guy. Mattel has done an absolutely fantastic job with their build-a-figures and this is no exception. Chemo is still my favorite, but Stel is definitely a close second.
5 out of 5
I know – how can I bitch about the lack of accessories and give this guy a perfect score? Because if there is an instance where I can forgive it, the c-n-c is it. This is a truly outstanding figures and another reminder of just how good Mattel can be when they try.
Until next time, stay creepy
-Phantom
Posted by Phantom Troublemaker at 1:00:00 PM