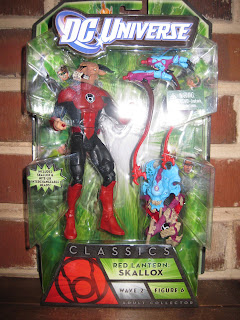 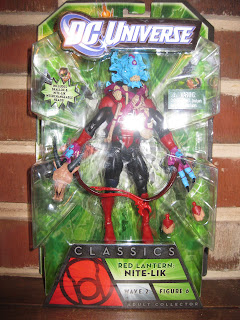 Here we have another multi-headed figure, only with this one I had to buy both. Well, I didn’t have to. I don’t have to buy any of this nonsense. But that’s a thought I try not to spend too much time thinking.
Out of all the new Lanterns, I like the Orange the most. Well, Larfleeze, I guess. And Luthor – I like Orange Lantern Lex Luthor, too. And Glomulous – does he count? Do all of Larfleeze’s projections count? I guess it doesn’t matter because we all know Mattel won’t make them anyway. Or if they do, they’ll be in a three-pack with some other tiny figures.

Okay. Sorry. My point was that I really like the Orange Lanterns, but the Red Lantern Corps is pretty awesome, too. I was stoked to be getting three members of that group in this wave, even if we don’t have their leader yet. 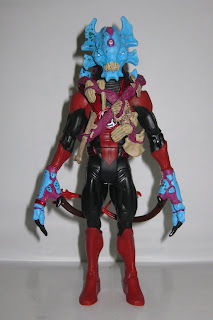 First Glance: Nite Lik (I wish so much that it was just Night Lik) looks AWESOME. Like if Clive Barker got together with Sepultura and Pushead and made a figure. 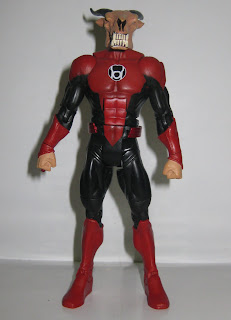 Skallox isn’t quite as striking, but still looks like the cover of a metal album. Maybe just an older one. 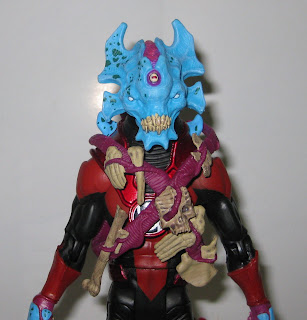 Sculpt: The basic DCUC body with a belt glued on. Like, visibly glued on. Maybe even crooked. The belts on these guys look like crap. I don’t know what they’re paying the Indonesian three-year-olds that put these things together, but it’s too much. Somebody needs to take away their lunchtime ball of dirt for a couple of days.
Other than the belts these look pretty good, though. Standard articulation, all my joints were tight and moved just fine.
Nite Lik’s head is a marvel of action figure design. He really does look like one of Clive Barker’s sketches for Nigthbreed. Those things going across his chest are head-tails (like a Twi’lek) and yes, those are skulls and bones and stuff adorning them. His hands would be horrible enough if they were just the claws, but Mattel had to go and add those barbed tongue-things coming out of them (which is something that was actually in Nigthbreed). Sculpt-wise, Nite Lik is fantastic. The only thing that would make him better would be a crazy-ass body to match his head and hands. I’ll admit, it’s almost more disturbing to have that craziness on top of a humanoid form, but it would have been nice to have some kind of misshapen alien form. If you can’t tell, there is also a chest piece with the Red Lantern symbol underneath the head-tails. It looks cool and adds to Nite Lik’s individuality. 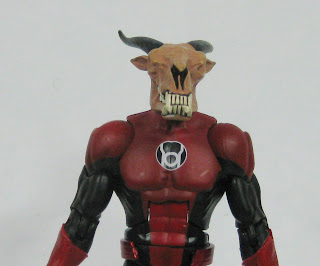 Skallox is much more simple, but still a nightmare in his own right. The head is really just a traditional cattle skull, but it looks cool. For some reason I really like his hands. I’m totally okay with this one having a humanoid body. 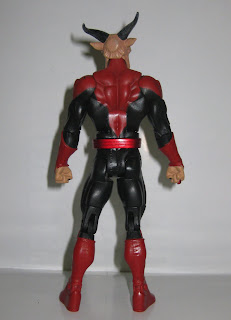 Design: Apparently red is just as difficult to deal with as yellow. The paint on these guys’ uniforms is sort of uneven and doesn’t look great. The lines are good and everything is clean, I’m just not crazy about the variances in texture and thickness.
Skallox – being a cow skull – has a minimum of paint on his head and hands, but what’s there looks good. 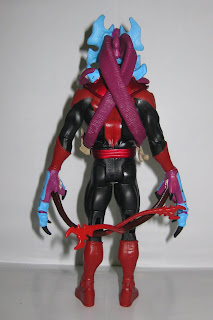 Nite Lik’s paint is just as fantastic as the sculpting. I’m still not sold on the blue, but it does make this creature appear even more alien. All of the multi-colored details are clean and really just make this a vibrant figure. 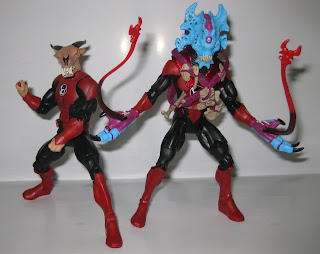 Accessories: None, and this is where these figures really make me ornery. At a bare minimum they should come with a Red Lantern, but they should really have ring constructs or Deadly Hate Vomit as well. 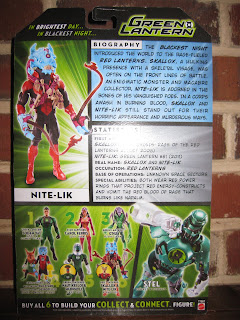 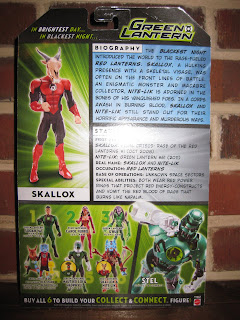 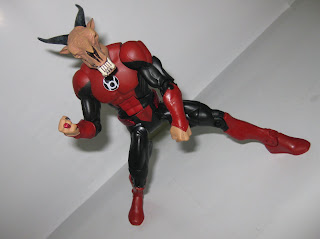 Overall: These guys really pissed me off. I love the heads and hands, the bodies range from lame to merely okay and the lack of accessories is infuriating. And no, the extra parts aren’t accessories.
3 out of 5 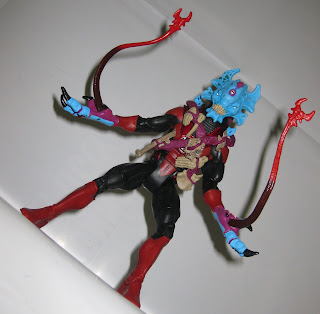 I just can’t give them a “2” because they really are too good for that. I’m just irritated about the crooked belt with the visible glue.
Until next time, stay creepy
-Phantom
Posted by Phantom Troublemaker at 1:00:00 PM