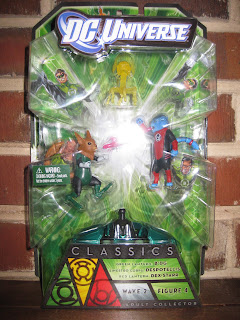 I was extremely excited to see that Mattel was producing a Dex-Starr. It meant I didn’t have to order that DC Direct Mera figure because let’s be honest – nobody wants to order a Mera figure.
It seemed like a really neat idea to release a few smaller ring-bearers as a set. I still don’t quite understand why the chipmunk thing is B’Dg and not C’hip; but whatever. I definitely like that they made Despotellis. That story from Tales of the Sinestro Corps is one of my favorites. 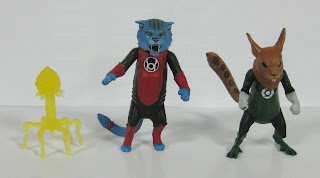 First Glance: It really is neat to see these three characters in the package like this. They are awfully small, though. 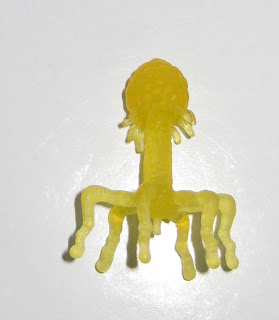 Sculpt: Despotellis is a mutant penis with legs. I can’t get past that. I know it looks exactly like it did in the comics, but it just seems so much… penisier in three dimensions. I mean, c’mon – it even has a veiny shaft. That being said, Despotellis is an extremely well-sculpted and detailed mutant penis. 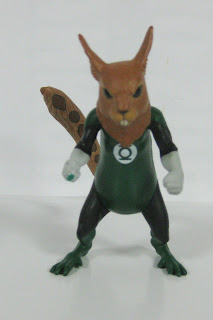 B’Dg is likely the cutest action figure you’ll buy this year.
A Special Word From Mrs. Troublemaker:
“OMIGOSH! ADORABLE!”
B’Dg is articulated at the neck, shoulders, hips and tail. I am a huge fan of articulation, but it’s funny how much better this minimally articulated figure looks than a lot of what Mattel offers when they are restrained by having to work around hip joints and shoulder joints and whatnot. His little face is so adorable I just want to pinch his little cheeks. 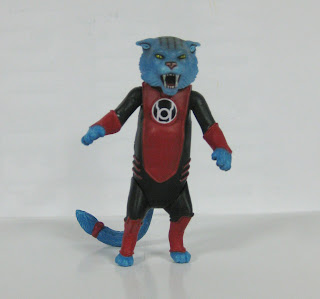 Dex-Starr is great, with sculpted fur details and the angriest little kitty face you’ve ever seen. He has swivel joints at the shoulders, hips, neck and tail. His mouth is open so you can attach the included Red Vomit of Rage and his ring is on his tail. 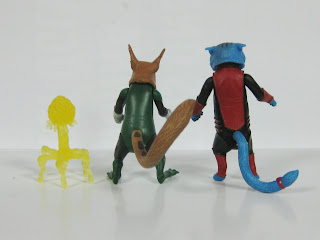 Design: B’Dg has a great amount of detail and several paint apps. I love his face and the markings on his tail. His uniform is solid as well, with no bleeding or blotches.
Dex-Starr has some nice shading on his fur and face. His uniform looks like it should.
Despotellis is translucent yellow.
I don’t want to downplay the quality of the decos on these figures (well, two of them). They just look great and accurate and there isn’t that much to say. 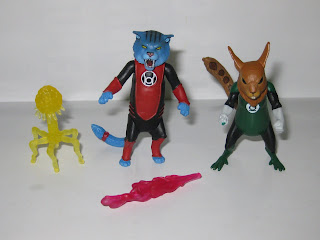 Accessories: The set comes with Dex-Starr’s Red Vomit of Rage, which fits into his mouth perfectly – and stays there! I wish it were more red than pink, though. I’m tempted to consider Despotellis an accessory, but I won’t. Instead, I’ll say that there is no excuse for ring bearers not coming with constructs. Dex-Starr’s Vomit is fine as a substitute, but B’Dg really should have come with something. I don’t think Despotellis ever used a construct, so that’s okay. 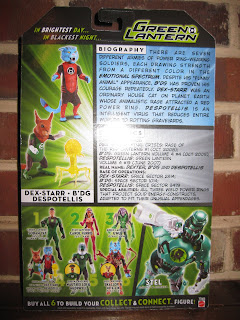 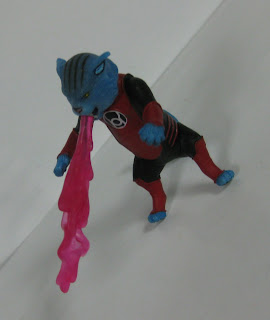 Overall: I’m not sure this is a great value. If they had worked in one more little creature it would have been, but Despotellis isn’t even as big as some accessories we’ve gotten. But, we all had to have Dex-Starr, so what are you gonna do?
4 out of 5
Until next time, stay creepy
-Phantom
Posted by Phantom Troublemaker at 1:00:00 PM