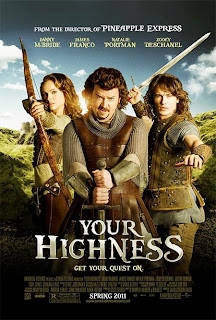 I want to start by saying that I know for a fact I would have enjoyed this movie more if I had been baked. I’d downed 64 ounces of Miller Lite beforehand at the Dave & Buster’s; but – as one Phantomaniac pointed out to me on Facebook - that isn’t the same. Of course, he then went on to claim that marijuana enabled him to more fully appreciate the nuances and directorial decisions of stoner movies.
Right, dude. Being bombed just makes you more accepting of shit that doesn’t work or pacing issues or pretty much any error a movie that features a pedophiliac Yoda stand-in smoking weed and kissing James Franco full on the mouth might have to offer. You’re too busy with your giggles over what happened fifteen minutes ago to notice the giant hole in the plot.
I smoked weed for years and there’s two things I can tell you for sure.
No, literally. Just two things – that’s how much weed fucks up your brain.
Anyway, I had this whole plan to get a bunch of people together and go to Medieval Times and get loaded before seeing Your Highness on Saturday. It sounded like pure fucking genius to me and everybody I mentioned it to, but there was the whole problem of getting a bunch of people together. I realized a couple of days out that it just wasn’t going to happen so I scrapped that idea and planned on just going whenever I could on Friday. 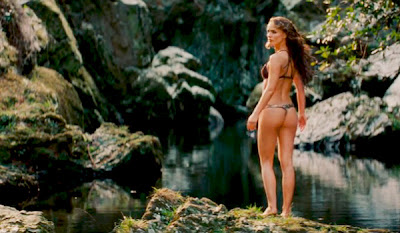 Also in the movie are Charles Dance as the king and Rasmus Hardiker as Thadeous’ manservant, Courtney. Dance does a great job and reminds me of a manlier Tim Roth. Hardiker, however, is the find of the movie. I think this is his first major film and he owns his role. When you’re on screen hanging with talents like Franco and McBride (and don’t be fooled – McBride is talented and very, very good at what he does) then you’ve got something special to offer. His character Courtney is one of the highlights of the film. One of those secondary characters that could have been a throwaway for laughs but by the end of the movie you’re like, “Oh, man. I hope they don’t kill him.” Know what I mean?
All of the individual bits within the film work on their own. The giant hand and the crazy titty people in the forest, the minotaur, the sequences in Leezar’s castle, the grimy town (and the entry into said town that is clearly meant to evoke the introduction of Mos Eisley spaceport) and of course the Wise Wizard.
The story is flimsy and doesn’t make a whole lot of sense in a couple of spots, but honestly the movie is about the jokes and the magic shit. And on that level it is a complete success. The characters are all memorable and hilarious and I bet stoners and teenagers are already quoting lines all over the place. Don’t get me wrong – I think Your Highness could have been a legitimately great movie if a little more attention had been paid to tying things together and maintaining a fluid story. It feels just a bit too much like a collection of random events that happen to involve the same people. There’s no arc. Or something. There were so many things done just right in the movie that it makes me a little mad anything was done wrong. It could have been a great movie.
But I still liked it a lot. I’ll buy it when it comes out on Blu-Ray and I’ll probably buy it again when they do a Director’s Cut. If you’re a stoner you’ve already seen it (no – trust me – you may not remember but you did) and if you’re a fan of out-there comedies and fantasy movies you owe it to yourself to check out Your Highness. The effects are worthy of any standard fantasy flick (they’re not quite Lord of the Rings caliber; but what is, really?) and the locations are beautiful. It really paid off for them to film it in and around Dublin. Sets would have ruined this one for me, much like they ruined Kingdom of the Crystal Skull. Okay, well – that was fucked from the start.
Oh, and the Minotaur in Your Highness is the best looking one I have seen on screen. The scene with Courtney is… memorable.
I went into this movie with very high – no pun intended – expectations, so it’s something of a miracle that I liked it as much as I did. Honestly, this is one of those movies that sitting here writing about it has made me like it more and want to see it again. I’ll have to do another review after the Blu-Ray hits. For now:
3 out of 5 Severed Giant Hand Monster Fingers
Until next time, stay creepy
-Phantom
Posted by Phantom Troublemaker at 1:00:00 PM