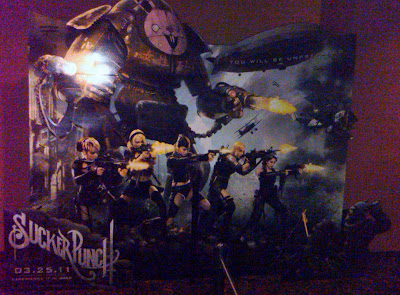 I was very, very excited about this movie. It features a bunch of unthinkably hot chicks in ridiculously fetishized costumes battling dragons, orcs, giant robots, Nazi robots, robot samurai with Gatling guns and just plain old robots everywhere from Germany to an alien planet. If you gave me a truck full of money and told me to make a movie, it would probably be an awful lot like Zack Snyder’s Sucker Punch. And that is a problem, because I have no fucking idea how to make a movie. I don’t know how to create a compelling visual narrative, I don’t know how things should be paced, I don’t know how to coax actors to deliver good performances. Apparently Mr. Snyder and I have some things in common.
*I’m going against my normal rule and putting spoilers in this review because I need to in order to express everything I feel about this movie. If you don’t want everything ruined, stop reading now.*
The opening minutes of the movie are set to an excellent cover of The Eurhythmics “Sweet Dreams” and show how the protagonist – Babydoll (I don’t think we ever get her real name) – loses her mother, accidentally kills her sister while trying to protect her from sexual assault by their stepfather and ends up in an (very Arkham-esque) insane asylum so that her stepfather can control her (presumably vast) inheritance. It is all very drab and dramatic and slow-motiony and even at this point there was something going on that I didn’t like. I wasn’t sure at the time what it was and I’m still not. I think maybe it all felt a bit too much.

When we get to the asylum we are introduced to the main antagonist. I can’t remember his name, but he was one of the best things about the movie. If they do a new Addams Family movie this actor totally needs to be Gomez. Naturally this guy is evil and takes money from the stepfather to have Babydoll lobotomized so she can’t be a problem. We are also introduced to the stage in the asylum, where Carla Guigino’s character works with the girls to overcome whatever their particular issues may be. I think in a different version of Sucker Punch this stage would have played a much more significant role, and I think that version might be a whole heck of a lot better than the one I saw.
Anyway, we learn that Babydoll has five days before the lobotomologist (or whatever) is going to show up to do the deed.
After that Zack Snyder makes his first move to eliminate any interest in the events of the movie or concern about the characters. We get a scene with Babydoll strapped into a chair. There is a doctor there talking and he picks up a giant, ice pick-looking thing that looks like it came out of Pinhead’s tool belt; raises it to Babydoll’s eye and then – a millisecond before it goes in – we move inside the girl’s head to the first dream sequence.
My problem here is that the way the lobotomy scene was shot made me one hundred percent sure that that chick was getting lobotomized. Seriously, I was all like, “Well she’s fucked. Who am I supposed to be caring about?” The only way that pick wasn’t sliding up under Babydoll’s eyelid and piercing her frontal lobe was if… well there was just no way. Short of all of the fantasy shit coming alive and her busting out a katana and slicing off the dude’s hands at the last second. And I just didn’t think there was much chance of that happening (spoiler alert – I was right).
So right there we have any kind of concern for our protagonist removed.
But we have to keep going, so now it’s time to meet the whores. For some bizarre reason Babydoll has imagined she is in a brothel. The guy that runs it is Gomez and the priest bringing her to the brothel is Babydoll’s stepfather. In a bit of weird narrative trickery, we are introduced to this scene by way of a new character – Sweet Pea – stopping the performance of a staged lobotomy on the whorehouse stage. She makes what is some sort of meta commentary on the weakness of the narrative thus far and instantly establishes herself as unlikeable. Really. There was nobody in this whole movie that I liked less than Sweet Pea and this is hilarious for reasons that will become clear later on.
So Gomez tells Sweet Pea to show Babydoll around but Sweet Pea is too busy being Queen Bitch of Slut Mountain so she tells her younger sister, Rocket to do it. Naturally, Rocket is all sympathetic and quickly becomes BFFs with Babydoll.
I’d like to mention here that the costumes in the whore house are hideous, boner-killing things. While the main costume designs from the good parts of the movie (the ones you see in the trailers and posters and stuff) are right up my alley and I ask our dear Lord on a daily basis to make sure there are plenty of ladies at Dragon*Con dressed in them; the whorehouse costuming is a fetish of Snyder’s I just do not share. The look is best described as “Homeless 40’s Ballerina”.
Amber explains how things at the brothel work and introduces her to Carla Guigino’s character, Madame Gorski. Even limping around and utilizing an accent more ridiculous than Red Skull’s from the 1990 Captain America movie, Carla Guigino is so fucking hot. At this point we learn that all the girls have to dance so they can entice the customers into fucking them. Now, I don’t know what kind of weird, selective males Zack Snyder has populated his world with; but I have never needed to see a girl dance to determine whether or not I wanted to give her a hot beef injection. But whatever. A conceit has been established.
Eventually Babydoll has to dance and this is where the movie gets really, really good (for a while). Madame Gorski plays “Army of Me” by Bjork and triggers a scene that will be forever remembered as one of the great broken promises of cinema (by me, anyway). 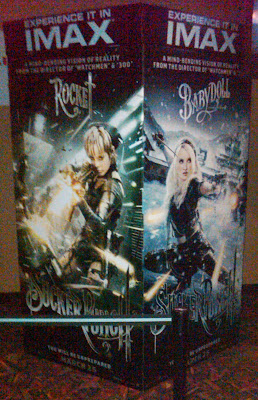 When Babydoll dances, she enters yet another dream world where she is in a little black sailor/schoolgirl uniform. This particular dream world is feudal Japan, complete with swirling snow and temple stairs. Babydoll heads up the stairs and enters the temple to find Scott Glenn sitting at an altar behind a sword. We go through some typical, “What are you looking for?” crap and he tells Babydoll she has to get a map, fire, a knife, a key and that she will end up having to sacrifice herself. I mean, they don’t straight-up say that, but it is so blindingly obvious they might as well have had Bruce Willis pop out and say, “I’m dead!” And I really do think that Snyder thought it wasn’t obvious. Because otherwise the ending of the movie is even more of a piece of shit. And I just don’t believe Zack Snyder knowingly made a piece of shit.
So Scott Glenn gives Babydoll the sword and a pretty cool gun with a bunch of charms on it and leads her outside. It turns out these three giant robot samurai showed up while they were inside chatting and Scott Glenn is all like, “Alright, well – go get ‘em!” and basically shoves Babydoll out the door and shuts it behind her. “Army of Me” kicks back in and we get one of the most visually stunning battles I have seen in years. The background is fantastic, the robot samurai look fantastic and menacing and tangible. Babydoll even gets her ass kicked a little bit before she starts to figure out how to fight back, and this establishes the physics of this dream world. Everything is just beautiful and impactful and could not have been shot and choreographed better.
And the whole time I’m sitting there thinking, “Yeah, but – she’s going to get lobotomized. She loses and there’s some stupid twist.” And I just couldn’t get invested.
So Babydoll kills all three robots in grand fashion and returns to the Brothelscape, where she has apparently just completed the most amazing dance anybody there has ever seen. Even Gomez and Madame Gorski are impressed. I think this is where we met the other two girls – Amber and Blondie. Amber is my favorite. 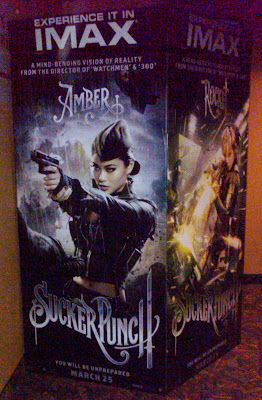 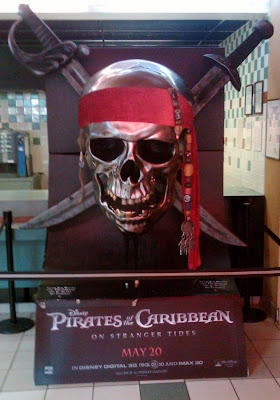 I'm just as excited for all of these as I was for Sucker Punch. 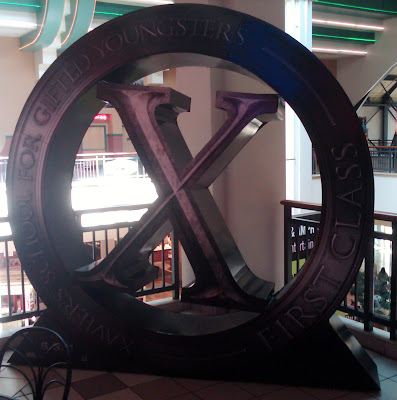 I hope they meet my expectations more than this one did. 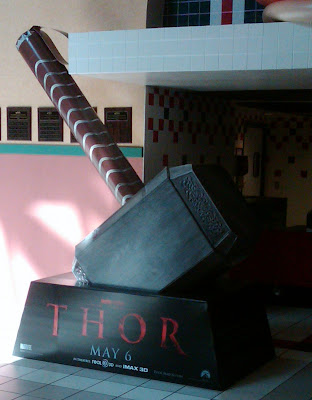