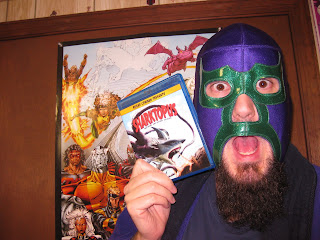 A couple of weeks ago io9 had a contest to give away one of those plush Sharktopus dolls that I would stab a bum to have. I was at work when I saw the contest and its approaching deadline, so I had to do a lot of thinking to figure out just how the heck I was going to enter.
The contest involved following up this sentence:
When Sharktopus fell in love, it was a mild Spring day.
With a brief paragraph (or so) of story. I honestly felt that nobody on the planet would have a better idea than I did, so I had to make an attempt. This attempt involved sitting and writing the story, e-mailing it to my phone, leaving the room so I could use my phone and using the horrible functions on my phone to copy and paste what I had written from the e-mail to the io9 comment section.

Once I did that, despite the assurance from io9 that you did not have to register to enter I had to register to post my comment. This took motherfucking forever because io9’s server or whatever is an absolutely un-navigable piece of shit. I finally got an e-mail confirming my registration and making sure they could send me spam whenever they wanted. I also got a link to my comment. After attempting roughly 22 times to view my comment I finally got the message
“This comment has been marked as spam.”
And it never posted. I seriously spent a couple of hours trying to enter this stupid thing.
So fuck you, io9. Fuck you and your shitty format and your commenters who never fail to amuse me with their constant failure to read articles they comment on and their unabashed glee over the slightest possibility that any pop media characters might be even the slightest bit gay.
You don’t get my fantastic Sharktopus short story. The fine folks here at Needless Things do, and that’s who should have gotten it in the first place, anyway.
Here you go:
When Sharktopus fell in love, it was a mild Spring day.
But that love was to be endangered from the moment it blossomed. Sharktopus had been cruising several miles off the coast, its hunger recently sated on a meal of fatted youths. It had glimpsed something shiny in the still chill coastal waters and maneuvered closer to investigate. There – in a round gilded cage – writhed something that shocked Sharktopus to its core. It wasn’t so much surprise at the enormous cephalopod within the golden prison as it was that Sharktopus could have a desire other than hunger or revenge. This octopus was different from others – larger, darker in color and with strange metal cylinders attached to its head. Two of its tentacles sported metal pincers, two more featured saw blades. The other four were normal – sleek and covered in suckers.
At almost the exact moment that Sharktopus felt the slow burn of desire, the golden sphere began to ascend upwards through the waters. Sharktopus followed it up, circling to find a way to release the beauty within to no avail. As Sharktopus approached the surface, it caught sight of the vessel drawing the sphere upwards. It was covered in human weapons and had the look of their metals; much like his love’s beautiful claws and saws. Sharktopus had learned much from its encounter with the human Andy Flynn. It had come away with half of a face and minus one tentacle, but much wiser. It knew how to bide its time. And how to listen. In particular to one oddly attired human near the lifting device that drew his love from the depths.
“Yes! Yes, draw it up! At long last I will be rid of my nemesis the Cape and Palm City will be mine!”
And Sharktopus knew that it would follow this human with the strange eyes back to Palm City. That it would find this “Cape”, whatever it may be.
And that there would be…
A FUCKING TEAM-UP.
And there you have it. I know I would have won that fucker.
What do you think? Do I need to finish this ridiculous thing? Let me know. 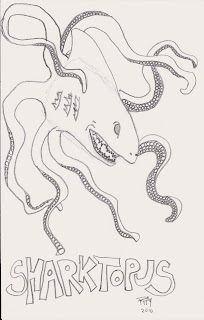 Until next time, stay creepy
-Phantom
Posted by Phantom Troublemaker at 8:19:00 PM