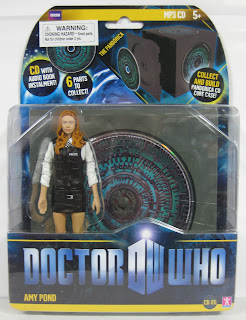 I am a big-time build-a-figure chump. If there is an item that I think I need, then I am going to buy any number of figures I don’t in order to have it. Sometimes I can unload the extraneous toys on eBay, sometimes I just end up with extra figures.
Despite knowing the Pandorica “toy” that this series of Doctor Who figures built was in no way a good toy, I had to have it. Just the concept of the Pandorica is so cool that even a half-assed one would do. Granted, I was hoping for a bit more than half-assed when I preordered the set from BigBadToyStore (In the interest of fairness I have to tell you I would have ordered from JRsToyWorld.com because it was fifteen[!] bucks cheaper but they sold out their preorders).
The only figures I was really excited about from The Pandorica Opens set were the Doctor and the Cyberman. “Doctor in a Fez” is a concept I cannot resist; heck, anything in a fez is a concept I can’t resist. And the Cyberman is just awesome.

The Amy Pond figure originally pictured with this set was the same as the one that I already had (that I paid waaay too much for thanks to Mrs. Troublemaker at Dragon*Conlast year), but ended up being the version in the police officer costume. And not the Kiss-O-Gram either, the “Sexy Time With Rory” time. Cool. 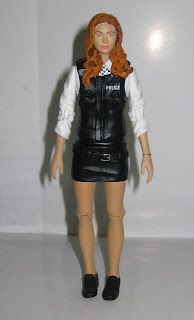 First Glance: I wish she had her little hat on, but this is actually more appropriate to the scene the figure is representing. 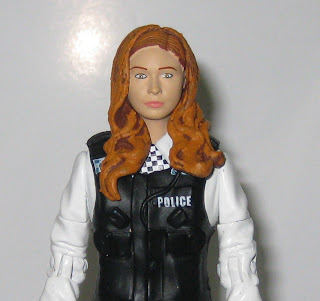 Sculpt: All of Character Options’ head sculpts are just a bit – I don’t know – fuzzy or something. They’re not bad and always look very much like the characters, there’s just something a little too broad about them. But that might just be me being overly critical. Honestly, they’re so close to perfect that I think it bothers me more that they’re not than if they were just bad. In a world where this is supposed to look like Harrison Ford:
I can’t imagine why I would have a problem with this figures resemblance to Karen Gillan (could we get to work on having Kieron Gillen write a Amy Pond one-shot?).
So, in short, the head sculpt looks very good.
The rest of the figure looks accurate enough to work. The waist down is parts farmed from other figures, but they work just fine. Cop Amy didn’t have a belt like this one (from the regular Pond figure) but it works. The torso is new, with the vest being a spate piece from the shirt and looking all the better for it.
The figure has the somewhat baffling Character Options standard of being very good until you get to the shoulders. Why those aren’t ball joints I’ll never understand. Or – better yet – Hasbro’s magic shoulder hinge. Also, many of the joints in my Who figures are a bit loose. This seems to vary from figure to figure and isn’t as bad as you might get from other companies [cough] Mattel [cough] but is probably something that should be looked at. 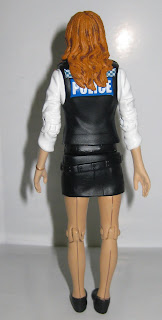 Design: CO did a good job with the paint apps. The hair looks very good and has several different shades that make it look more lifelike. Amy’s face is nicely done, but I don’t like it quite as much as the regular Pond figure. This one looks bit too made up.
The rest of the figure is basic but very successful. The detailing on her little neck scarf thing is nice and the lettering on the back of her vest is tight and clean. I like that they did the lines up the back of her stockings, too. 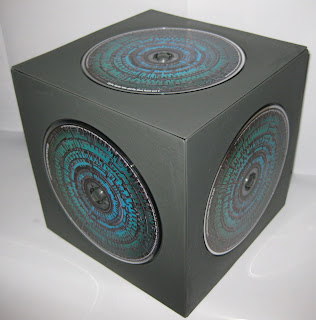 Accessories: Each figure in this set comes with a piece of the Pandorica and a CD with part of a Doctor Who audio adventure. That may seem a bit strange, but Doctor Who audio stories and plays are what kept the franchise alive and current in the UK from 1989 until 2005 (the TV movie got mixed results). These audio-only adventures are hugely popular over there and are considered as in-canon as anything else, so it’s pretty neat that CO worked them into the Pandorica design.
That being said, the Pandorica is kind of a letdown. It is not a toy. It is a flimsy plastic box to keep your six CDs on. Once I need the room I won’t hesitate to take it off of my Doctor Who shelf.
I’m going to say an alternate head with the hat should have been included with this figure. I’m not a big fan of figures at this price point ($16.67) with zero accessories.
Now, you may be thinking, “But Phantom, what about the CD and the Pandorica piece? Surely those count?” Nah – not really. Considering it takes about a hundredth of a cent to produce a CD and that the Pandorica is six identical pieces of flat plastic, I appreciate the thought but the execution is lacking. 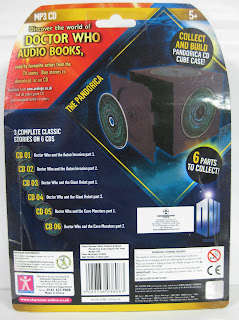 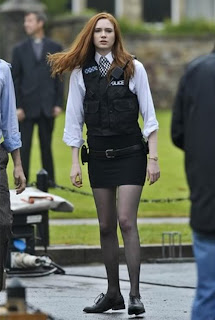 Overall: This is a figure that is exactly what you would expect. Nothing wrong with it, but nothing surprising and extra-cool either. If you need Pond as a cop (or the Pandorica), get it. Otherwise, I’d suggest sticking with the standard release.
4 out of 5
I suppose I need to address the price points of the Doctor Who line. With all the bitching I do about how expensive I think Mattel’s lines are, it might seem unfair that I’m perfectly fine with paying just as much for smaller figures.
It’s not so much that I’m fine with it; it’s just that Doctor Who has been a lifelong obsession of mine and only in the last few years have toys been readily available. And even now they are nowhere near as common as Mattel’s offerings. So right there you’ve got one reason to pay a premium.
Also, they are generally crafted with a lot more skill than other lines and cannot share nearly as many parts. Tooling must be a much pricier consideration than anything Mattel does.
Lastly, while I honestly can’t justify forty dollars for a figure of Doctor Four with K-9, I’m going to pay it because Hasbro sure as heck isn’t going to be making one any time soon. Doctor Who is a very British thing, and the toys come from a British company. They’re all imported to specialty retailers in the US and honestly could be even more expensive than they are.
Until next time, stay creepy
-Phantom
Posted by Phantom Troublemaker at 1:00:00 PM