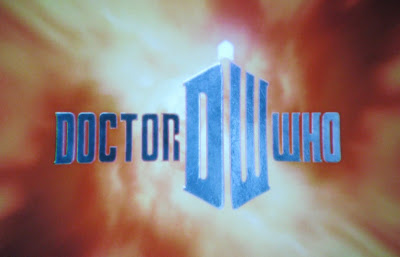 MASSIVE SPOILERS FOLLOW!
You should really just go and watch the last 213 episodes of Doctor Who if you’ve got the time. Which you probably don’t since the new season starts tomorrow (see countdown to the right); unless you happen to live in a blue box. At the very least you should watch last season, but if you can’t manage that here’s a (not so) quick summary:
Sorry for the lack of pictures in this one. I am super pressed for time!
Continued from yesterday's post...
Oh – before the attempted snog-fest Amy Pond explained to the Doctor that she was supposed to be getting married the day after she originally left with him (which is still tomorrow when they return to Earth) and it’s to the big-nosed fellow that helped them out at the hospital (Rory).
Cut to Rory’s bachelor party where the Doctor jumps out of the cake and tells Rory what a lucky man he is because his future wife sure is a good kisser, after which he grabs Rory and brings him along to 16th century Venice so he (Rory, not the Doctor) and Amy can have some quality romance time because she quite clearly needs it.
Naturally, a clan of Space Vampires (Spampires) are running things in Venice and the Doctor and company have to sort them out. It’s a fun time, but the only real thing of note is that Rosanna – the leader of the Spampires – tells the Doctor that the reason they wanted to subjugate and eventually destroy the Italian city was that her species was nearly wiped out when the silence fell (!) and destroying Venice was the only way for them to survive. Then she jumped into a canal and her children ate her, making this the fourth or fifth genocide the Doctor has witnessed or personally caused.

Venice didn’t work out so well, so next it’s off to Rio De Janero! But on the way the trio of the Doctor and Amy and Rory are waylaid by a strange dream that puts them in Leadworth, where Amy is preggers and Rory has the worst pony tail ever seen on television. When they wake up a strange little man shows up in the TARDIS to tell them that now they’re dreaming and the world where Rory has a pony tail is real… OR IS IT?... and they have to decide which is reality.
Both scenarios have very bad things happening. Pony Tail Land features a bunch of alien-possessed geriatrics trying to vaporize our heroes, while in the other the TARDIS is hurtling towards a Cold Star. It doesn’t matter exactly what a Cold Star is. If you have the cognizance of a stalk of celery you know hurtling toward a star of any sort can’t be good.
The strange little man – who the Doctor refers to as the Dream Lord – pops up from time to time in both scenarios, though more frequently in the TARDIS. Our heroic trio are left mostly to themselves to figure out the business in Leadworth. This goes significantly worse than the Doctor’s usual adventures; with everybody getting split up and Amy getting knocked out and she and Rory trapped in a seemingly hopeless situation in one of the Leadworth cottages. The Doctor has a confrontation with the Dream Lord in a butcher shop that is fairly unpleasant and ends with him (the Doctor) locked in a freezer with little hope of escape until he remembers his Sonic Screwdriver can do some sort of thing that lets him escape.
During all of this, Amy is in the TARDIS alone with the Dream Lord. He’s telling her that she must decide which reality is true and choose between the life of grand adventures through time and space with the Doctor or a more provincial life of love and security with Rory in Leadworth.
Meanwhile, the evil alien old people are assaulting the cottage where Amy and Rory are holed up and naturally they’re trapped together in a nursery and having mushy feelings as Rory cuts his hideous pony tail off to prove his devotion. But the Doctor is on his way to save the day, having commandeered a public transport bus. Leadworth is under full-on old people assault at this point, with all of its inhabitants being threatened. The Doctor is barreling through town picking up innocents; heading in the general direction of his imperiled companions.
And arriving just a moment too late, as Rory gets vaporized by the old people right as the Doctor shows up. He and Amy manage to make their way out of the cottage, but Amy decides that real or not she doesn’t want to live in a world without Rory so she tells the Doctor to drive the bus into the side of the cottage. He does and it explodes, Simpsons-style.
And our heroes wake up back in the TARDIS, whole and unharmed. Well, aside from a good coating of frost. The Dream Lord pops back in, tells them good job and releases the TARDIS back into the Doctor’s control. But the Doctor – being kind and old but mostly a whole lot of wise – senses things are not as they seem and activates the TARDIS self-destruct, much to the dismay of Amy and the recently not-dead-anymore Rory. And the TARDIS blows up.
And our heroes wake up again and discover that the Doctor was right (of course) and that it the Dream Lord was nothing more than a bit of psychic Space Pollen (Spollen) that got lodged in the Doctor’s eye during their last (off screen) adventure. The Spollen produced a sort of entity comprised of the Doctor’s darkest thoughts and feelings that somehow took control of our heroes’ psyches. So the Dream Lord was just a dream.
Or was he? I wouldn’t be too surprised to see the Dream Lord show up again. The whole conceit rang just a bit too much like TheValeyard from “Trialof a Time Lord”, so I can’t imagine they won’t pick that thread up again. And hopefully they’ll use the same actor.
With all of that cleared up, they can finally head to Rio!
Continued tomorrow...
Until next time, stay creepy
-Phantom
Posted by Phantom Troublemaker at 11:00:00 AM