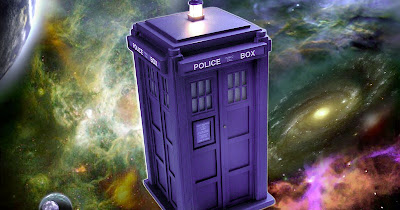 MASSIVE SPOILERS FOLLOW!
You should really just go and watch the last 213 episodes of Doctor Who if you’ve got the time. Which you probably don’t since the new season starts tomorrow (see countdown to the right); unless you happen to live in a blue box. At the very least you should watch last season, but if you can’t manage that here’s a (not so) quick summary:
Continued from yesterday's post...
Something you should know about the TARDIS: Just leave it alone. Don’t ask why sometimes it’s late and sometimes it’s right on time. Try not to think about how it might show up right outside the PM’s War Room in one story and then land in Wales when you meant Rio in another. But if you can’t just accept that it makes for better TV, here’s a theory that I made up but probably wasn’t the first to think of:
The TARDIS is sentient, to a degree. It is an interdimensional space/time vehicle that can think. It is a piece of technology so far beyond our comprehension that we’re like plankton in the presence of an iPad. Also, it has been utilized by not only the Doctor, but many other members of his race throughout time and to who knows what ends. In other words – she’s going to do as she damn well pleases. If she wants you in the Cabinet War Rooms, you’re going to be in the Cabinet War Rooms. Best not to ask why.
So the TARDIS materializes in the Cabinet War Rooms during the London Blitz and it is made clear that the Doctor and Churchill are old buddies and Churchill needs a bit of help. Well, needed a bit of help a month ago when he first called.
But now everything’s slightly more okay because a genius Scottish inventor by the name of Bracewell has created some dandy war machines that are really good at blowing Krauts out of the sky! Except that the war machines turn out to look like and sound like and pretty much be Daleks and not only that but Pond doesn’t recognize them as Daleks even though the whole entire Earth has been attacked, invaded, enslaved and even planet-napped entirely by the murderous cyborgs like a jillion times.
But we’ll worry about that later, because right now there are Daleks hanging around the PM and they are bound to be up to no good. Despite using psychological tricks like asking the Daleks what their plans are and hitting them with a giant pipe wrench, the Doctor is unable to divine their scheme. And then, finally, after he loses it and screams, “I am the Doctor and you are Daleks!” the shit hits the fan. The Daleks are all like, “That’s right and you totally fell for our plan, loser!” and blast a bunch of soldiers and dematerialize.
Here’s something you should know about the Daleks: They are always up to no good and they are always dicks like that.
It turns out Bracewell is an android that the last three Daleks in existence planted on Earth after narrowly escaping the thirtieth time the Doctor has wiped them out entirely (Lesson – you don’t ever just get rid of popular, money-making villains; especially when you can make fifty completely different variant toys from the exact same mold). Bracewell was programmed to “invent” the Daleks and present them to the British government in their time of need in order to draw the Doctor’s attention so that he can identify them as Daleks. He needs to identify them as Daleks so the Dalek Progenator will accept their command to generate new Daleks consisting of pure DNA. The Progenator will not do this for the three remaining Daleks because the Progenator is an ancient device and the last Daleks are so far removed from the original species that it will not recognize their commands. But once the Doctor – who is programmed into every piece of Dalek technology as the equivalent of Satan – identifies them as Daleks the Progenator cranks up and starts Progenating.
The Brits figure out where the Dalek ship is just in time for the Doctor to pop up there in the TARDIS and wave a cookie at the Dalek survivors and claim it’s the remote control for the TARDIS self-destruct and if they don’t cease and desist he’ll blow them all to Dalek Hell. Daleks have bad eyesight and no experience with teatime comestibles, so they hold off from blasting the Doctor, but are sneaky enough to activate the Progenator once it’s warmed up or whatever.
And out pop five shiny new redesigned Daleks that some people hate and others merely loathe. Personally I don’t mind them. I’m not sure the colors shouldn’t be a bit more subdued, but overall they look pretty neat. But I can see where people might think Stephen Moffat ordered them out of the IKEA catalogue. 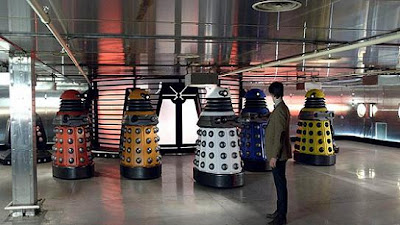 The new Daleks (which technically are supposed to be old Daleks) are even bigger dicks and know what a cookie looks like, so they shoot a beam into London that turns all the lights on right before the nightly German air raid and tell the Doctor they’re going to vaporize him now, thank you very much and then proceed to vaporize the (former) Dalek survivors just to show they mean business. Straight gangsta.
While all this is going on, Pond has convinced Churchill to let the remorseful Bracewell (who had no idea he was a robot or a double agent) fit some Spitfires with gravity bubbles and laser blasters to go and take out the Dalek ship. They eventually destroy the beam that was keeping the lights on in London and then go for their final run to destroy the Daleks. And then the Daleks drop the knowledge that Bracewell runs on a “Oblivion Continuum” (read: giant bomb) rather than a couple of double-As and if they activate it the Earth is kaput.
The Doctor realizes Shit Just Got Real™ and calls off the Spitfires, returning to the War Room.
And then the scariest thing in the whole episode happens: the Daleks retreat. Which they have never, ever done before; almost always to their detriment. What this signifies is that the Daleks’ ability to reason has finally surpassed their desire to exterminate. This is definitely going to be a problem in the future. They are still, however, enormous dickweeds; so they activate Bracewell’s “Oblivion Continuum” before they go.
But the Doctor and Pond (mostly Pond because she’s a chick) defeat the device using the Power of Love™. And if that sounds unreasonable to you, then you might just want to remember that the Power of Love is a curious thing. It makes one man weep, another man sing. Change a hawk to a little white dove. Deactivate a Dalek super-bomb – that’s the Power of Love.
HUEY LEWIS &THE NEWS : POWER OF LOVE by pierrot77
As the TARDIS dematerializes, we see the Mysterious Space Crack once again in the wall of the War Rooms. This means something…
I mentioned River Song before. I probably didn’t mention her enough though. She is the classic enigma wrapped in a riddle with a mystery on top. We first met her a couple of seasons ago where it was revealed that she was from the Doctor’s future – possibly even his wife. All we really know is that she can fly the TARDIS better than the Doctor and is sassy as all get-out. Like, gay dudes would give up their gym memberships just to hang out with her for a day sassy. We all love her because she is the only person in the recorded history of the Doctor that puts him as utterly off balance as he puts everybody else. 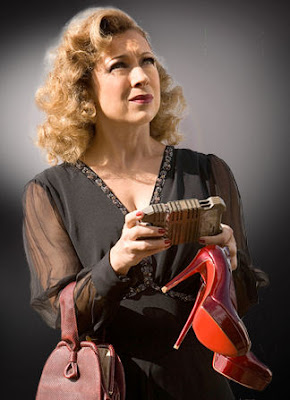