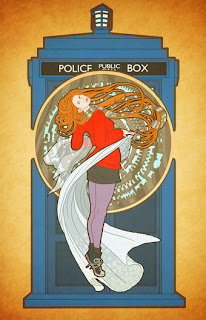 MASSIVE SPOILERS FOLLOW!
You should really just go and watch the last 213 episodes of Doctor Who if you’ve got the time. Which you probably don’t since the new season starts tomorrow (see countdown to the right); unless you happen to live in a blue box. At the very least you should watch last season, but if you can’t manage that here’s a (not so) quick summary:
Continued from yesterday's post...
Which is where Series 6 (Season 32 if you’re keeping track) starts: the newly-refurbished Doctor is careening through the London sky in his newly-demolished TARDIS, leaking flames, smoke and (Time) Lord knows what else all over the place. The TARDIS comes to a crashing halt behind the house of a little girl named Amelia Pond. Being nearly fearless, she runs out of her house and watches as a man pops out of the blue box that has just ruined her gardening shed. He demands apples, so the nearly fearless little girl brings him into the kitchen and gives him an apple. The Doctor takes a bite, spits it out and says he hates apples.