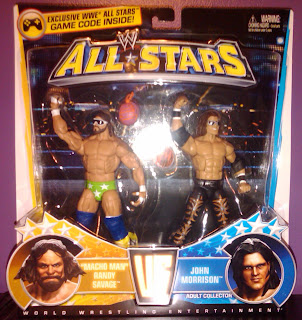 Normally I would lead off a review of wrestling toys with my Vintage line: “I had no intention of buying these, but…” but I’m not doing that today. I saw these online somewhere before they came out (probably at Toy Fair) and kind of wanted them from the start.
You might be wondering what “these” are and what makes them so darned special that I would (once again) buy wrestling figures after stopping that collection several years ago. They are 2-packs of Mattel’s WWE figures that are being sold to tie in with (and promote) the forthcoming WWE All-Stars video game. Each of the three sets reflects a “Dream Match” between a current Superstar and a Legend, and I think Mattel did a pretty good job with the matchups. You’ve got John Morrison versus “Macho Man” Randy Savage, CM Punk versus “Stone Cold” Steve Austin and Randy Orton versus Jake “The Snake” Roberts. I passed on that last one.

Mattel has been doing a spectacular job with their WWE line. I’m sure not a lot of you have been buying anything from it; and that’s a shame because they’re really some of the best action figures on the market today. The likenesses range from good to so great it’s a little creepy. The articulation (for the Elite style) is the best you’re going to find in a US toy line, allowing the figures to actually look like they’re doing wrestling moves. I know that sounds crazy for a line of wrestling toys, but there you go. The decos on these are outstanding as well, with even the cheaper regular line looking great. Hell, Mattel has even scored a pinfall victory (I realized “knocked it out of the park” was not the appropriate euphemism here) with their kid-oriented lines. The Flex Force line cleverly puts action features into figures that still look pretty good and their Rumblers mini-figures are so good that Lil’ Troublemaker has almost every single one of them already; with no prompting from Daddy. Believe me, I’m not trying to get my son into more toy lines than he already is – he saw the ring in Target one day and didn’t stop talking about it until we went back and got one. He barely even watches wrestling with me, but the Rumblers are clearly going to be his gateway. It’s enough to make me reconsider my disdain for WWE’s new “TV-PG” standards. And honestly, that’s not WWE’s big problem – they’ve already proven they can still be entertaining when they want to while following family-friendly guidelines.
But anyway, I liked the idea of these sets from the beginning. Once I saw them in Toys R Us for the amazingly reasonable price of $24.99 apiece I couldn’t pass them up. The Elite style figures (which these are) normally retail for $14.99 individually, so getting two of them for twenty-five bucks is a deal; especially when you consider the going price for certain other Mattel lines that aren’t even as high in quality as the WWE toys. $17.99 for a single and $34.99 for a 2-pack, my ass. 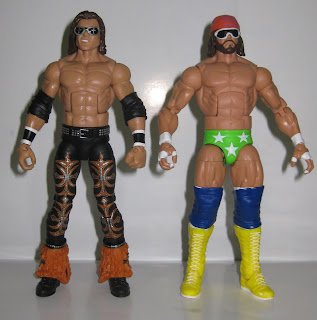 First Glance: Mattel’s packaging for the WWE line isn’t nearly as fancy as what JAKKS Pacific did, but is still more eye-catching. These figures are not styled any differently than the normal Mattel line, but thanks to the graphics on the package they do seem to pop a little bit more. They caught my eye despite the fact they were on a lower shelf and not pegged. 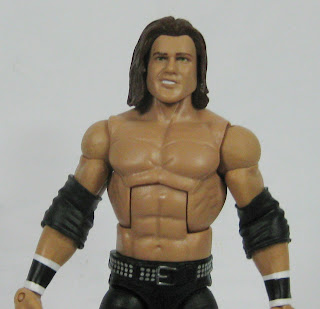 Sculpt: Each figure sports articulation at the neck, shoulders, upper biceps, elbows, wrists, upper abdomen, waist, hip, knee, upper calf/boot top and ankle. That’s great, but what really makes these figures so impressive is how the functionality of each point of articulation works with the aesthetics of the figure. I’m also amazed at just how many different body styles Mattel is producing. If you look at the physiques on these figures they are massively different from wrestler to wrestler. This is a far cry from the days of JAKKS when Rey Mysterio would have the same torso as Triple H. And they would be the same height.
The textures on these guys is great, too. Fabrics and skin and hair all have different feels and looks to them, which really makes these things more lifelike. This is one feature that I wouldn’t really want carried over to Mattel’s other lines. Comic book and cartoon guys should look like comic books and cartoons. 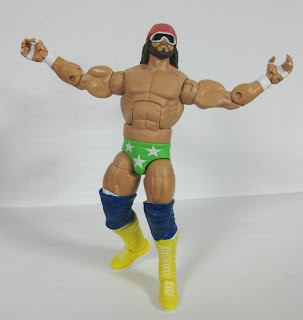 The shoulder/upper bicep joint is sculpted in such a way that it blends with the figures’ musculature but doesn’t create any ugly gaps like the DCUC and MOTUC figures have. The elbows are not double jointed, but the joints are deep enough that you can still bend them more than the typical 90° or less. The wrists both swivel and pivot. The joint on the abdomen has a wide range of motion and is sculpted and fitted tightly enough that it doesn’t detract from the figures’ smoothness. The waist is a simple swivel, but the circumference of the abdomen and crotch have been rounded and matched well enough that you don’t get as strange a look as most figures do when you rotate the joint. The hips are done the same as most higher-quality 1/6th scale figures (and MOTUC) – there is one piece jointed to the crotch and another that connects to the thigh on a swivel. This provides the same range of motion as a ball joint or the DCUC swivel/hinge method without the gaps of the ball joint or the ugliness of the DCUC hinge. The knees are double-jointed, but the effectiveness of this varies depending on the figure’s accessories. The boot-top swivel is done so well you can’t even see it. The way the ankles are jointed is also lifted from 1/6th scale/MOTUC figures. There is a deep pivot point that connects the ankle to another pivot point on the foot. This provides a wide range of motion front-to-back and side-to-side. Thankfully, Mattel avoided toe articulation. I have exactly one 6” scale figure in my entire collection that this actually works and serves a purpose on (Ryu from Ninja Gaiden, if you were wondering).
Now, onto specifics. 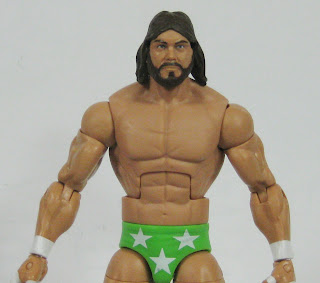 Macho Man has an appropriately beefy body. His overall look appears to be from around WrestleMania 3, though I can’t pinpoint it. The headsculpt looks about as accurate as it’s going to without featuring Savage’s signature male-pattern thinness up top. And really, I’m not sure it was as recognizable in 1987 anyway. He looks just as good with his sunglasses and bandanna on or off, an impressive feat given how shitty headgear traditionally looks on action figures. The major issue here is that the pads on Savage’s knees restrict his movement pretty severely. They look really good, but there might as well be regular joints under there for the range of motion you get. I still kind of feel like they should just sculpt pads onto these figures. It might not look as neat, but at least you’d get the full benefit of those double joints. I hate it when wrist/finger/hand tape is painted on rather than sculpted, but I also recognize that there are hundreds of different ways that people do this. I guess I can deal with it given that new hands for every single figure would probably be cost-prohibitive. 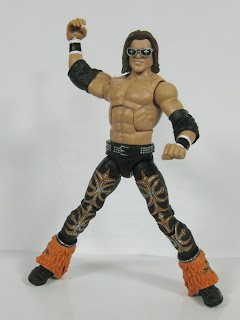 Morrison has a leaner body that suits him. His head looks kind of weird, but once you look at a picture, Morrison looks kind of weird, too. Not ugly or anything, just… odd. He looks better with his shades off. Not only does Morrison enjoy a full range of motion thanks to his lack of knee pads, he also has some clever pieces to represent the fur on the bottom of his pants. Actual fur would have messed with the figures aesthetics and rarely looks good at this scale anyway. Mattel used a rubbery, flexible material that is cut cleverly enough that it doesn’t interfere with his ankles at all. Morrison’s elbow pads are flexible and mobile enough that they do not interfere with his movement. Like Savage, Morrison’s sunglasses do fit perfectly and do not leave noticeable holes when they are off. 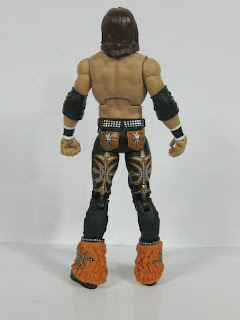 Design: Morrison’s paint apps look fantastic. His eyes and hair look solid and aren’t splotchy or misplaced at all. His pants are where things get exciting. Uh.. wait. His pants look really good. The detailing is just amazing. I hate to keep bagging on JAKKS, but they really did kind of suck. Even their highest-dollar figures frequently lacked paint on the back. I don’t think they produced a single John Morrison figure with detail on the back of his pants. This one not only has designs on the front and back, the designs look amazing. The only way they could be better is if they were sculpted on; and I have to admit that would be a little ridiculous. 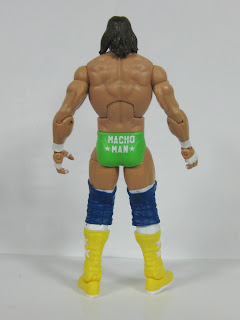 Savage’s head also looks solid. His eyes and hair look like they should. He has that painted wrist tape that I don’t like, but at least the white is solid and consistent. His trunks are a nice bright green and the stars and “Macho Man” are solid and centered. There is knee tape painted on under his pads that I thought was a nice touch. His boots are molded from a bright yellow rather than painted and look good despite that. 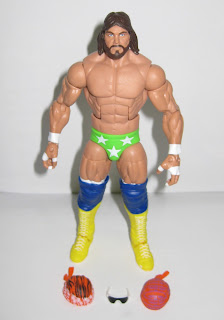 Accessories: The set comes with two bandanas and two pairs of sunglasses. I am assuming both bandanas are for Macho Man since I can’t remember Moz ever wearing one. The detail on them is ridiculous, with one featuring some kind of tiger stripes or something and the other a perfectly legible “Macho Man” pattern. 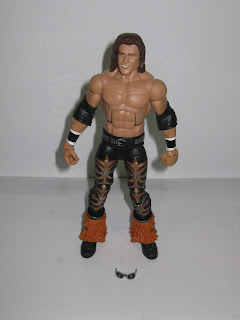 Morrison’s sunglasses have the little crosses on them, perfectly detailed and centered. Savages are white with black lenses. Mine had some little splotches of black paint on the bottom left side of the frame, but they scratched off easily. 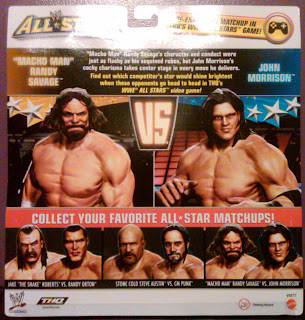 Packaging: Like I said, the packaging for this line is eye-catching. The video game representations of the wrestlers (which I love) make you stop and check out the sets to see what the heck is going on. Each set also includes a different cheat code for the game. Granted, these will all be online thanks to people like me – this set’s code unlocks alternate attires and is


L,L,R,R,U,D,U,D at the Main Menu screen
But it’s still neat that they threw something in like that. 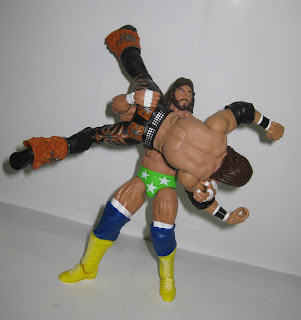 Overall: These are two great figures for a great value.
5 out of 5 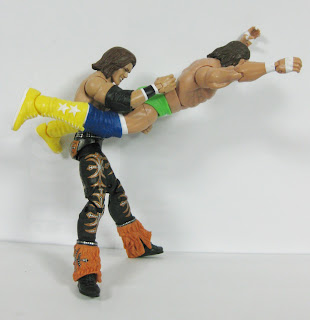 So far this is only the second Macho Man figure Mattel has given us and it will cost you two dollars more to buy this one with John Morrison than the (somewhat inferior) single release from the Signature Moments line. As far as the Morrison figure, the only difference between this one and the single-carded Elite release is the deco and the fact that you don’t get his fancy coat with this set.
Until next time, stay creepy
-Phantom
Posted by Phantom Troublemaker at 1:00:00 PM