Toy Review – Masters of the Universe Classics: Bow By Mattel 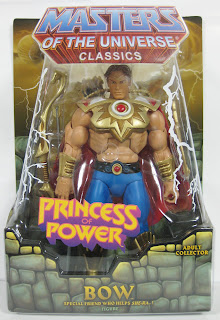 The Mattycollector.com Club Eternia Subscription has not worked out exactly like I had planned.
That’s not to say that I’m sorry I signed up, I just didn’t think my whole plan through before doing it. My genius idea (obviously it’s a good one, because LOTS of other people apparently are doing it as well) was to subscribe and then just put the figures I didn’t want up on eBay for the price plus what I paid for shipping (around $28.00 for the regular figures). This would come out cheaper than what I have seen a lot of the figures go for.

It just so happened that I didn’t want any of the three (THREE!) figures that came out in February. Bow is pretty gay and not actually from Masters of the Universe and I don’t really need a Preternia Disguise He-Man. I’m honestly not even sure what that is. The Shadow Beast was the one I was most averse to, however. It’s just Gygor with a different head and hands and isn’t that great. I mean, he looks cool enough, but isn’t anything that got me excited (like Gygor). Plus, there were a ton of them in the cartoon, so I thought people would be wanting multiples. So I put the three up on eBay with start prices of $28.70 for Bow, $49.99 for Preternia He-Man (give me a break – you can only get him with a subscription; I thought he’d be special) and $38.70 for the Shadow Beast. I’ll admit that I did hesitate a bit before listing Bow and Preternia He-Man. Like most Matty products they looked cooler in person than on the site. But I still put them up.
Imagine my disappointment when I checked the next day (I don’t know why I didn’t look into it before listing them, I guess I was just sure my plan was solid) and saw not only that I had zero watchers for those items, but that people weren’t even looking at them. I’ve put absolute pieces of crap up on eBay that have gotten 20 views in a day. Zero views for what should be a hot toy didn’t make sense. Had I accidentally listed them under kitchen accessories or something?
No. The problem was that there were at least forty other auctions for each item and several that offered all three items. And most of those auctions had starting prices that would mean a loss if they went for that. Yes, I understand that the items would probably go for a lot more in the end; but I’ve learned my lesson about putting things up for less than I really want for them. I’d rather sit on something for a few months or end up with a toy I don’t even want than get lowballed.
In short, I knew at that point my stuff wasn’t going to sell and it didn’t (I did manage to unload the Hawkgirl from the Gentleman Ghost 2-pack for fifteen bucks, though). I didn’t open anything just then because I thought I could probably wait for what was already on eBay to dry up and maybe do even better that way. So they sat on my eBay shelf, waiting for the opportunity to strike. Or be auctioned – whatever.
But I couldn’t stop thinking about Bow. And his mustache. 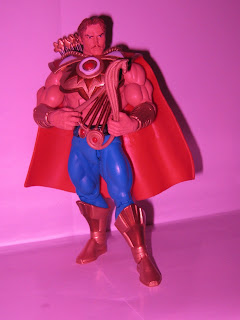 There has been a dearth of mustachioed figures lately (and if you don’t think I’m working on an article addressing this issue, you must not have been reading Needless Things for very long now) and Bow comes with an alternate head with a pretty decent Norris on it. So while Preternia He-Man and Shadow Beast await their re-listing, Bow now stands on my desk. That Cosmic Key Preternia He-Man comes with is awfully tempting, though… 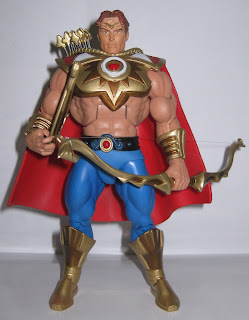 First Glance: Bow doesn’t look any less gay in person, but he is somewhat more interesting visually. All of the shading and tiny paint detail that Mattel puts on these figures just doesn’t come through in their production photos. I’m not all super-excited about owning this guy or anything, but I’m okay with the fact that I opened him. 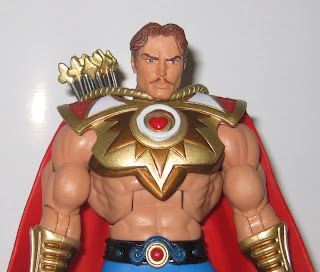 Sculpt: Bow has zero joint problems. Not only does he sport the standard MOTUC articulation, his wrists have ball-joint analogs so he can play his harp. Okay, I guess it’s really so he can draw his bow. In either case, it works well and looks good. The only thing that bothers me is that Bow has hands that are proportionate to his body while the rest of the human Masters have those weird, tiny child hands. Bow also has new boots and they are very cool boots. Space warrior boots. I would have thought he’d be more of a slipper man. 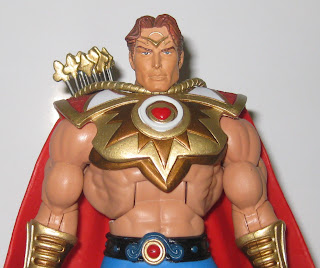 Both of Bow’s heads look nice, though I can’t say they resemble anybody in particular. Switching between heads is a bit easier than some figures. The heads don’t feel entirely secure after you put them on, but they are.
Mattel did something very cool and clever with Bow’s crotch (this is me maintaining a straight face). You see, Bow is the first non-robotic figure in the series that goes commando; he doesn’t wear furry underpants like everybody else. Rather than leave his crotch unadorned, Mattel put a pair of flexible rubber underpants (straight face) over it to cover the unsightly hip joints. I appreciate this attention to aesthetics, though it confuses me how Mattel could catch something like that and overlook his comparatively monstrous hands. 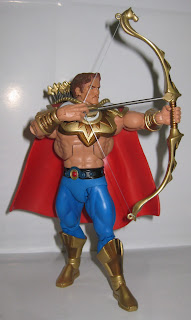 Design: Man. Those are some blue pants. I have a feeling the pictures are not conveying just how strikingly blue those pants are. Like, Bow’s pants are way more blue than his cape is red; and his cape is way red. The gold detailing looks really good against the vibrant blue and red. I’d also like to point out one more time how cool his gold boots are.
Bow’s head(s) is(are) nicely detailed and his eyes aren’t off-center or anything. I like the color they went with for his hair (and mustache).
My Bow doesn’t have any paint errors, though I have to say that Mattel seems to be pretty good at restricting those to the retail releases. 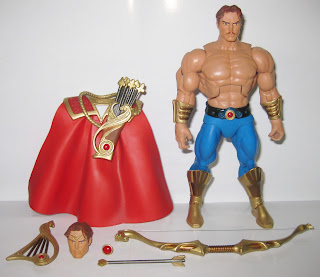 Accessories: Unsurprisingly, Bow really knows how to accessorize. He comes with a bow (duh), a harp, an arrow, his cape with attached quiver and that extra head.
Due to the United States ridiculously restrictive toy laws the bow comes unstrung, but Mattel was thoughtful enough to make it with a loop at either end so you can put one in yourself. I recommend some 10lb test fishing line. I wouldn’t tie it too tight, though. The plastic is flexible but will probably break if stressed too much or for too long. The arrow is neat, but I was disappointed when I realized the head wasn’t a little heart like I initially thought. The harp is a harp with a heart on it.
Bow’s cape looks good and is attached to his chestplate, which has not only nice detailing, but a swappable center piece so that you can have your little champion wearing either a heart or a simple red circle. I’ll tell you right now it’s going to take a lot more than a red circle to make this guy look like he doesn’t spend his Friday nights singing karaoke at the Man Hole. Swapping the pieces is easy and they stay securely in place. The only issue I have with this accessory is the quiver is attached to the cape and has this cord on it that goes around Bow’s neck and looks… weird. Like our boy might be into auto-erotic asphyxiation archery. Or something. I also kind of wish it was a functional quiver with a bunch of arrows in it, or at least the option to switch a few arrows out with a piece that plugs into the top and resembles a full quiver, like Green Arrow (oh, man – I just realized that 2-pack is probably in our future). 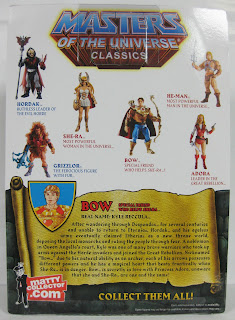 Packaging: The standard Masters of the Universe Classics packaging. It looks nice, makes the figures look even bigger than they are. You also get a bio on the back that is sort of a composite of each character’s history. That Princess of Power sticker on the front is absolutely hilarious. As if your toy collection wasn’t weird enough, now you own a big, musclebound hunk in blue tights with a package proclaiming him the “Princess of Power.” Better hide that one when the ladies come over. Or anybody, for that matter. I’m glad I open my toys. 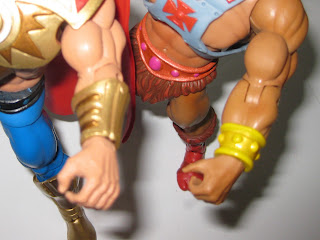 Overall: Quiver and hand scale issues aside, Bow is a pretty solid figure. I don’t really like him, but he is yet another example of Mattel doing a very good job with a lame character. He can stay on the shelf as long as he keeps his hands to himself.
4 out of 5

I’m really struggling with the price on these figures. I’ve always felt that twenty dollars is too much, but when you consider that Star Wars and GI Joe basic figures are $7.99 at retail right now and aren’t even half the size of these it doesn’t seem so outrageous. Oddly, the larger Masters Classics seem like a bargain to me at $30 for beasts (like Battle Cat) and $40 for the giants (like Tytus). Granted, I haven’t actually seen one of the giants in person yet, so they may not live up to that one.
Anyway, Bow is plentiful on eBay if you want one. You can also go to my favorite toy store, BigBad. Or make me an offer if you don’t mind a loose one (still with the straight face).
Until next time, stay creepy
-Phantom