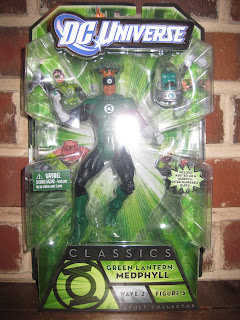 While I was excited about another figure with multiple heads/hands like Low and Maash from Green Lantern Classics first series, this one seemed like a lesser offering somehow. I’ve always liked Medphyll and you could toss a fishbowl helmet on pretty much anything and I’ll love it; I guess the standard Green Lantern uniform is just a bit played out in the DCUC world at this point.
The good thing about that generic Corps uniform was that it meant I could use one of the extra figures from the GreenLantern’s Light box set for either Medphyll or Naut Kei Loi depending on which one came from BigBadToyStore. Or at least, I hoped it did. I wasn’t actually sure if it would work. Mattel could easily change the connection points or neck size or who knows what else to make my little plan not work.
But it did. So please note that all of the pictures of Naut Kei Loi in this article are of a Hal Jordan body and not a Medphyll/Naut Kei Loi body. 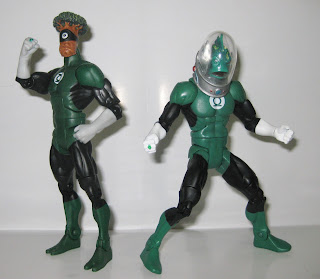 First Glance: The one I got happened to be Medphyll. He looks exactly as weird as I’d hoped he would. If my body plan hadn’t worked I was going to find a spare monkey to stick Naut Kei Loi on like Minion from Megamind. 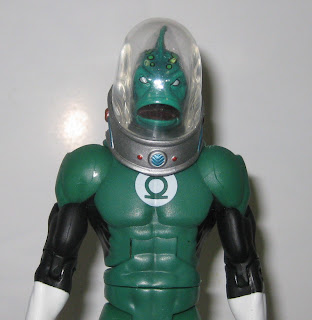 Sculpt: The body that comes with these two heads is the same as Hal Jordan’s (or any other basic DCUC male) except for one thing. Well, two things – the feet. It has these great, two-toed feet that almost make me wish I had gotten two of them. I don’t understand why the figure didn’t come with some cooler hands, as well.
Naut Kei Loi’s head is really cool. It would have been easy enough to just stick a simple fish head in that awesome dome, but Mattel actually produced a pretty neat sculpt with all sorts of wrinkles and details. The material the dome is made of is a little hazier than I might like, but it had to be sturdy. I really had to push to get the head on. Although now that I think about it, it might be worthwhile to see if Medphyll fits a little better on the Hal body. I might like those big ol’ two-toed feet better on Naut Kei Loi anyway.
(Okay - I switched bodies and in the process discovered that the dome pops off of the collar of the helmet so you can push the head on. It's very easy and works perfectly with the Hal body) 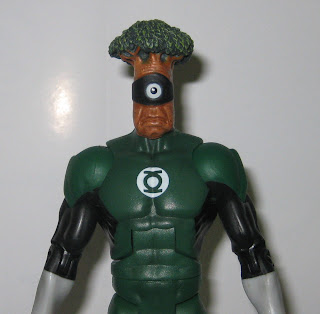 Medphyll is weird. I had always likened his head more to broccoli, but as Lil’ Troublemaker put it, “He has got a tree head!” And his tree head looks good. You can move it around a bit, but both of these heads are more gimmicky than functional. That doesn’t really bother me. These guys can stand around looking odd, they don’t have to be all dynamic and stuff. 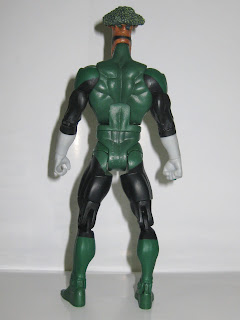 Design: Mattel used a darker green for these Lanterns’ uniforms. I think it looks nice, but it goes against my belief that every Lantern from each Corps should be the same shade of whatever color they wear. The darker green looks good and is clean. The white on the gloves is thick and error-free and they went with green boots for this one. I almost think I might have preferred white.
They did a great job with the paint on Medphyll’s face. The rest of his head has some nice washes to accentuate his tree-ness. 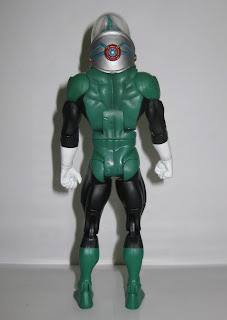 Naut Kei Loi has not only a tight job on his actual head, he also has details painted on his helmet that make it really look nice and old-school sci-fi. 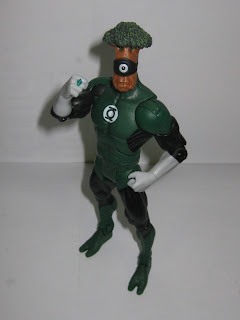 Accessories: Some might consider the extra head to be an accessory. I don’t. At the very least this should have come with a Lantern. Ideally a ring construct, too. 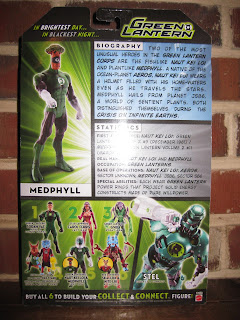 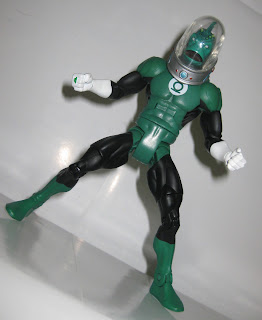 Overall: I’m glad I got this/these guys, but the figure is honestly a little underwhelming. I might be all Green Lanterned out from having just bought that box set.
3 out of 5
The complete lack of accessories just bothers the shit out of me. I get that the head is an extra piece, but Mattel is basically double-dipping here and when your figures are retailing for $17.99 each I think the bar needs to be just a bit higher.
Until next time, stay creepy
-Phantom
Posted by Phantom Troublemaker at 1:00:00 PM