Toy Review - DC Universe Classics/Masters of the Universe: Hawkman Versus Stratos By Mattel 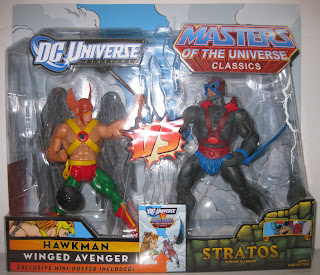 One thing I forgot to mention in the Aquaman/Mer-Man review was that I called these sets long before they came out. Because, clearly, I am a genius. I believe I had suggested Cyborg versus Roboto at one point. Not that that was a good suggestion – I think I saw a Cyborg figure the other day marked down to five cents.
I did not call the new sets, though. There are two new DCUC versus MOTUC sets coming out later this year and I was very surprised by both of them. Supergirl versus She-Ra and Green Lantern versus Zodac are both worthy entries that make sense. Zodac is the Cosmic Defender of Eternia, after all. I’m a little surprised Mattel was willing to pull the trigger on an all-female set in the boys’ aisle. I don’t know that I’ll pick up either of the new sets, though. I’ve already got a couple of Supergirls and more Hal Jordans than any one man could need; and I don’t have too much interest in Zodac. Also – as I have always maintained – She-Ra was and always will be a girls’ toy. So unless Mrs. Troublemaker wants one, I’m out.
Speaking of my wife, she preferred this set to the Aquaman/Mer-Man one. Obviously Hawkman is at least a tiny bit cooler than Aquaman, but that Mer-Man blows Stratos the flying monkey out of the water. So to speak.
But… the more I am around Stratos the more I like him. Let’s see how this one turned out. 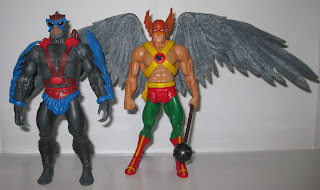 First Glance: Hawkman appeared to have a simpler paint job than the single carded version. Stratos looked exactly the same as the original upon initial inspection. This set isn’t very exciting, but I am getting one of the Masters that I don’t have plus an extra figure for twenty bucks – cheaper than I would get Stratos otherwise. 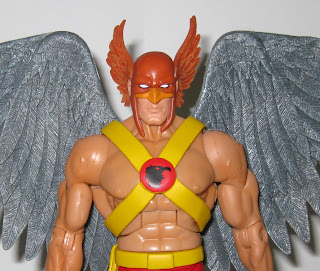 Sculpt: I’m still not crazy about the way Hawkman’s wings are articulated, but I honestly don’t have any better ideas. This Carter Hall is exactly the same as the regular release. He has the standard DCUC articulation and my figure has no issues with loose joints or paint sticking. 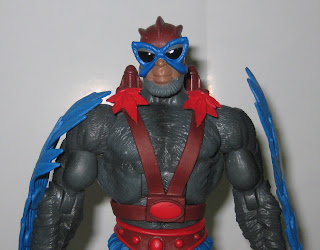 Stratos has the MOTUC articulation, but does have some loose ankles. He stands up fine but I wouldn’t be surprised to come home and find him on the floor one day. Mattel should really be giving those stands away. I had a lot of difficulty moving his arms around and it seems to be impossible to make him look good while in any kind of position that might suggest flight. I think the 2002 Stratos redesign is vastly superior to this one. Also, in typical Mattel fashion, the goofy way he was packaged warped one of his wings so that it looks weird. His face looks very good and has a lot of character for a guy with a beard and glasses… wait a minute. Stratos looks like me. Kind of. And now I love him.
Hawkman is one of the tallest of the DC Universe Classics, so the size difference is barely noticeable here. In all fairness, according to Mattel it was established at some point that on Eternia everybody is seven feet tall. I find that extremely funny and slightly suspect, but if you go with it then the two lines really do work together. 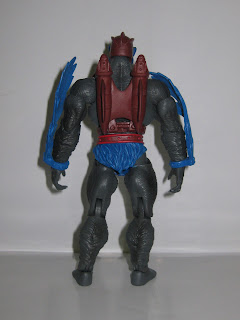 Design: Stratos has a fairly tight set of paint applications. There are no errors that I can see. He’s essentially a gray monkey with wings and a jetpack, so there’s not too much to fuck up. His colors are reversed from the original – this one’s suspenders and jetpack are red while his wings are blue. I had to check Mattycollector to find this out. I’m definitely not the sort of person this matters to. I get a kick out of the people who are going all crazy about the consistency of the stickers on the packaging and stuff like that. Just give me a good toy. 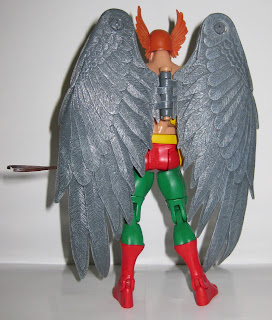 I was wrong about Hawkman. I thought the original’s helmet had more detail, but this figure is exactly the same. Hawkgirl’s helmet is the one that looks so much more interesting. The paint is not as tight on this figure. There are a couple of little spots – particularly in the yellows – that don’t look good. Mattel seems to have a big problem with yellow. I noticed the other night when I was rearranging my shelves that the Sinestro Corps kind of looks like shit. Not only are there several different shades of yellow (sometimes in the same figure, even), but their yellow paint seems to fall off with little provocation. Their shoulders all look terrible. But Hawkman is mostly okay. I’ll be selling him on eBay because my other one looks much better.
The Masters of the Universe win this round. Stratos just looks better and less flea-markety. 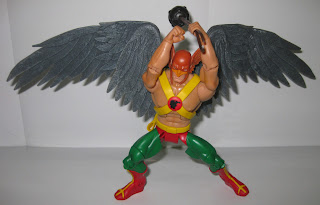 Accessories: Hawkman comes with the mace from the single carded figure. The strap on mine is broken. As much as I prefer the mace as a weapon, his sword would have been better since Mr. Hall has the loop to store it in sculpted onto his belt. 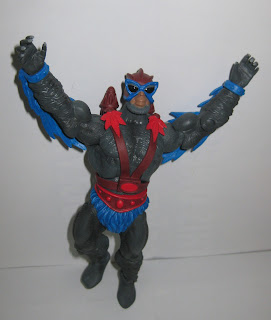 Stratos doesn’t come with any accessories. I forgot to check and see if the original had anything. I was positive he had a blaster, but now I’m thinking that’s Zodac. I think Stratos should have come with a big net. Or a perch.
This set did come with a "poster" though: 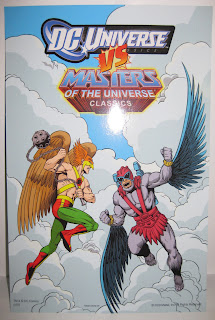 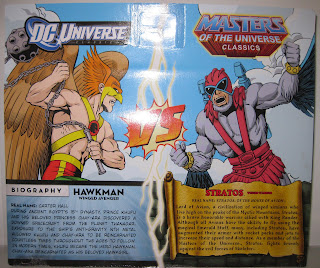 Packaging: It seems a little big, but I like this packaging. It makes this set seem more special than the standard DCUC two-packs. Also, it is bright and stands out very well on the store shelf. 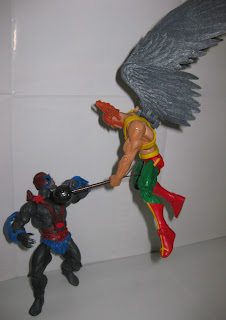 Overall: I don’t actually like this set as much as the Aquaman/Mer-Man one, but it is still a great deal for twenty bucks. And Stratos has definitely grown on me. I just wish he had something to hold.
4 out of 5
If you see this for twenty bucks I’d say definitely get it. Especially if you are missing either of these characters. The Hawkman is exactly the same as the original and you’ll never know the difference in… Stratoses? Stratii? Whatever. Go ahead and buy it before it goes back up.
Also, I’m not really sure what effect this discount might have on the future 2-packs. I can’t imagine it’s a good thing that they had to reduce the price by 33% to move them. I’m going to go ahead and say we might not even see Supergirl/She-Ra and that Green Lantern/Zodac won’t see release unless these are scheduled to hit right around the time of the Green Lantern movie.
Until next time, stay creepy
-Phantom
Posted by Phantom Troublemaker at 1:00:00 PM