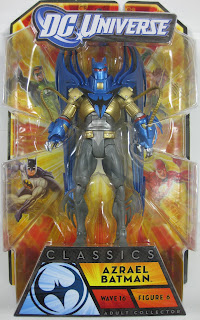 Mattel had a tough decision to make when naming this figure. “Jean-Paul Valley as Batman” is obviously correct, but there are all kinds of reasons you might not want that hanging from a peg. While “Knightsend Batman” would have technically been more appropriate than “Knightfall Batman”, I think Knightfall is more likely to be familiar to the general public or lapsed fans as the story where Bane (this series’ build-a-figure) broke Bruce Wayne’s back and then Wayne found the one insane sociopath in all of Canada to appoint as his successor. Way to go, Bruce. So of course, Mattel chose "Azrael Batman", which really doesn't make any sense given that Azrael was a different crime-fighting persona entirely and probably isn't as recognizable as Knightfall. Whatever.
Regardless, this is an exciting and eye-catching design for the Dark Knight that will likely draw the attention of people who aren’t otherwise collecting the line. You definitely don’t want those folks to pick up a cool-looking figure and then put it back because it’s some French-sounding guy dressed up as Batman. Yeah, I know it states his name on the cardback, but nobody looks at those until they get home anyway
I wanted this figure partially because of the aforementioned exciting design, but also because Knightfall and its follow-up stories are pretty much the signature event comics of the 90’s for me. I have managed to hang on to every single issue involved in the “Knight-whatever” storylines through five moves, one thieving roommate, two collection sales and a flood. I’ve read the storyline in its entirety more times than I can count. Parts of it are kind of awful, but a lot of it is pretty amazing and memorable. Certainly significant in the development of Bruce Wayne as Batman as we know him today.
In short, I was definitely going to buy this figure. Even though it is a lame Frenchman. And extremely (pun intended) 90’s. 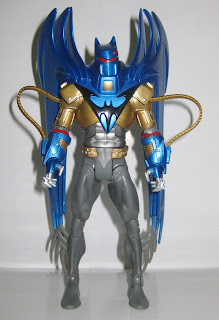 First Glance: Valley’s bat-suit looks very good as an action figure. I used to have a couple of variations that Kenner produced but I have no idea what happened to them (possibly lost them in the box of toys that thieving roommate absconded with). Just looking at it in the package I have no idea how they articulated this thing’s upper body or how moot any of that articulation may be. Still, he looks cool. Extremely cool. 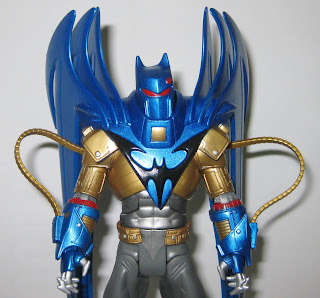 Sculpt: Valley seems to be 100% new parts. Even his ankles and feet are slightly different than the DC Universe Classics standard. But he does feature the same basic points of articulation as the rest of the DCUC line; plus double-jointed knees and the neat new ball-joint analog wrists that Mattel has started sneaking in here and there. While I was thrilled that Valley retained the great articulation, I was concerned that his giant chest armor/wings piece would interfere. Not so. Mattel molded the chest piece out of some sort of soft plastic/hard rubber that gives enough that you can raise his arms and pose them pretty much however you want. The arms are somewhat restricted, but no more so than they would be if somebody was actually wearing this somewhat foolish get-up. The range of movement his head has is also impressive given the giant collar built into the chest piece. The wings are a slightly firmer material, but still flexible enough that they don’t interfere with movement or seem prone to break.
All of the little details sculpted into the former Azrael’s Batsuit are outstanding. From his utility belt to the shape of his cowl/helmet to the stupid wing things on his calves look exactly like the comic. His gauntlets look fantastic with the belts of mini-batarangs (really, spellcheck? I’ve never used “batarang” before) sticking out of them. Also sticking out of those gauntlets are Valley’s ridiculous claw hands. I mean, seriously. How did this guy even catch crooks without ripping them to shreds? This suit is very exciting to look at, but it is probably one of the dumbest costume designs ever used in mainstream superhero comics. And that is saying a lot. (Of course, the ridiculousness of the suit was addressed and even used as a plot point once Bruce Wayne returned to reclaim the Mantle of the Bat, so you can’t be too hard on DC for that) 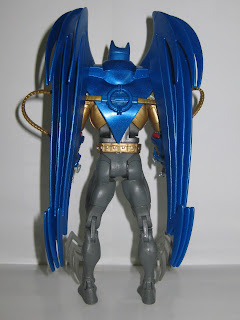 Design: This Batman has an absolutely fantastic paint job. All of his armor bits are detailed in gold and silver and honestly look nicer than anything we saw in the comics. The figure even has some silver detailing on his bodysuit, around the abdomen. Mattel could have easily left that gray and I certainly wouldn’t have thought anything of it. My figure doesn’t have any paint bleeding or spotting. This is remarkable given all the little details that are on it. Even the silver going down the abdomen is tight and defined.
Accessories: I suppose you could consider the chest armor/wings an accessory since they can come off, but I don’t. Really the only things this guy might have come with would have been an alternate Jean-Paul Valley head and some tiny batarangs. And tiny batarangs would have just been irritating. Unless the figure shot them… 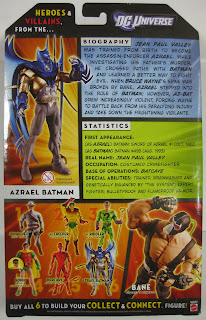 Packaging: Same old DCUC packaging. A warning, though – do not order from Amazon if you keep things in the package. All of the figures that came in this shipment had bent cardbacks or some other minor damage. I don’t care because I opened everything, but you might. 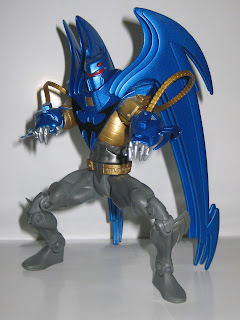 Overall: Again, a fairly stupid design makes for a great action figure. And Mattel went all-out for this one. In a perfect world this toy would shoot tiny batarangs and have a bat-signal light-up chest, but I understand that isn’t going to happen. So as it is, Jean-Paul Valley as Batman represents one of the few times I’ve felt I have really gotten my money’s worth for a DC Universe Classics figure.
5 out of 5
Which makes me realize that I should be handing out fewer “5 out of 5” scores for this line (and the Masters line). On the one hand, if you don’t feel like you’re getting your money’s worth out of a toy; you really shouldn’t consider it “perfect”. On the other hand, If you’re not getting a good value, why are you still buying the toys?
Because you’re a chump. So go ahead and dole out those “5”s, I guess.

UPDATE!: For the first time ever (and likely not the last) I’m going to have to make an official score correction.
Despite the fact that I looked at a few of the covers from KnightsEnd (done by the inimitable Kelley Jones), I failed to catch the fact that the stupid pointy things on Valley’s gauntlets are fucking backward. 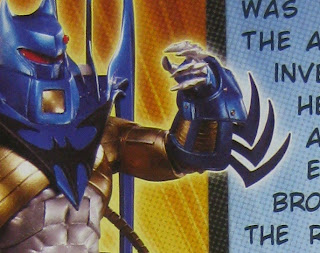 Evil pointed this out to me on Facebook and I felt like a real moron. After checking the covers again, I realized this is because Jones did not actually draw those things, making this whole argument seem a tad more foolish. I mean, if they're not even present on the covers, then how much can you really complain about them being oriented the "wrong" way?
Either way I’ve got to say I think my mistake is understandable. Mattel’s, however, is not. I’m a blogger who gets paid nothing to write stuff for fans numbering in the tens (and I love each and every one of you). Any mistakes I make result in little more than a good laugh from you guys and a forehead slap from me. Mattel is a multi-million dollar toy company that pays people more than I make at my actual job to do things like keep 90’s Batman’s ridiculous gauntlets from being wrong.
Apparently Evil knew about this from checking out the Matty forums (which I admittedly don’t do a whole lot) where some sharp-eyed Batmaniac pointed out the error after the first pre-production photos were posted. Mattel reportedly said they would fix it before the figure was released and – surprise! – they didn’t. At this point, though, anybody who believes anything Mattel says is likely too busy looking into ocean-front property in Arizona to notice.
So I never even would have known about this flaw if Evil hadn’t pointed it out. I’ve got to say, though, it really doesn’t bother me very much. I mean, I know those things are backwards; but it’s not like he has two left legs or anything (we’ll get into that later). It doesn’t really affect the aesthetics or quality of the figure.
BUT! It is a significant mistake and one that never should have seen the light of toy shelves. Or something. And I can’t rightly give such a thing a perfect score. But I also can’t dock too much because to be honest it just doesn’t bother me a whole lot.
New Azrael Batman Score: 4 out of 5
Until next time, stay creepy
-Phantom
Posted by Phantom Troublemaker at 1:00:00 PM