It’s time for some rambling because I have got to stay awake today. 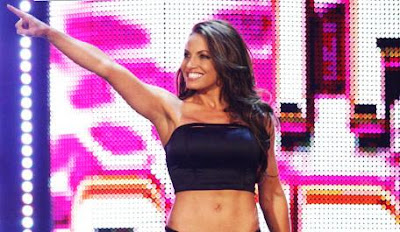 I’m going to start with Trish Stratus because she is still my favorite female wrestler ever and just happened to be on the RAW I watched last night looking better than she ever has. She’s not dyeing her hair anymore and I do believe she’s either had her implants reduced or taken out entirely. Both of these things have made her about 1000% hotter. My preferences lay towards smaller-boobed brunettes (or redheads if you could somehow extract the crazy), but Trish was always so awesome she made my list anyway. Which I’m sure she would be just thrilled to know.
Trish was on RAW being generally awesome and getting pinned by Vicki Guerrero so that one of the best heels working today (Vicki) could stay on TV. Vicki got the win thanks to some shenanigans from Lay Cool, setting up a match at WrestleMania that will pit the team of Trish, John Morrison and some fat broad from New Jersey against Lay Cool and Mr. Ziggles. I seriously couldn’t believe how tubby that Snooky chick was. I have never seen and will never watch the pride of America that is Jersey Shore, but I always thought Snooky was supposed to be some hot chick. She was like a butt dumpling in an ugly jacket.
So Trish will be at WrestleMania, and that’s nothing but good.
You know who else will be at WrestleMania? The Rock, that’s who.
I was really excited about this when it was first announced, but now I have a secret to tell you: I kind of wish he’d go away. Remember how amazing that first promo on RAW a few weeks ago was? How inspiring it was to know that the man could still tear the house down just by speaking into a mic and how exciting the thought of The Great One interacting with a new generation of Superstars was? Yeah, well forget it. Every segment since then has not only sucked, they have also been pre-recorded. Rock hasn’t even been back on RAW live. I didn’t believe the guy when he said he was back for good, that he would never leave again; but I thought it would take longer than this for my doubts to bear fruit.
To their credit, Rock’s verbal opponents (Miz and John Cena) have carried their end of things. Both have been physical week after week and cut entertaining, appropriate promos on the Brahma Bull. In fact, these promos are the only thing that give me hope about the situation, because Miz and Cena are calling Rock out for exactly the problems that I’m having. I can only think there might be a plan. But I kind of doubt it.
I told my wife last night that if I could choose between having The Rock or Jim Ross back full time I would go with Jim Ross.
Also on RAW, the Ginger Avenger Sheamus defeated Daniel Bryan to win the United States title. I’m pretty okay with how it went down (it was a solid match with a clean finish) and hope that it means we’ll get a rematch at ‘Mania. Sadly, I think there’s an equal chance this means we’ll never see Daniel Bryan again. It’s happened before.
In other news, Randy Orton versus CM Punk is going to happen at WrestleMania. I think this match is going to be HUGE. Both of these guys get very interesting mixed reactions, so the audience should play a big part in things. Even me and my crew, waaay up in the rafters.
Overall RAW was pretty good. I didn’t fast-forward through anything except the Khali versus Miz segment. Even that I had to slow down just to make sure what I thought was going to happen did (it did). 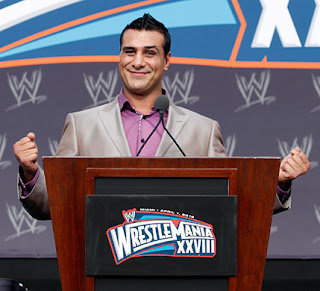 I’m not as excited as I should be for WrestleMania. I’m totally stoked about WrestleMania weekend. That Thursday is the PCW show at the Masquerade, Friday is the Ring of Honor show at Center Stage, Saturday is the Fan Axxess event (“X” means X-Treme!) and the Hall of Fame ceremony. I can hardly wait for all of that. It’s Sunday that has me kind of bothered. There was a time when I would have paid whatever it took to get the best seat I could for ‘Mania. But that time is in the past, so we all agreed that it would be cool enough just to be there and got the cheapest seats we could. Now I’m thinking being there isn’t going to be quite as awesome as sitting in the comfort of my own home and actually being able to see everything and hear the announcers. I know I’m going to be glad we went after all is said and done, I just can’t seem to muster a whole lot of excitement right now. I’m way more stoked about seeing PCW and ROH live.
Oh man, I almost forgot my second favorite segment on RAW and the thing that I was going to make a big, fat deal about:
Michael Cole’s thing with Jerry Lawler.
I cannot believe how excited I am about this match. I fucking hate announcer stories and I historically have very little tolerance for Lawler or Cole. My mind has created various unpleasant tortures for the both of them over the years. But this story has been told so well and Cole has been such a fantastic douchebag that I cannot wait to see Lawler beat the living shit out of him. Monday’s promo was a great example of this. Michael Cole brought out Lawler’s legit son – Brian Christopher or Grand Master Sexay, whichever you prefer – and had him cut a promo about what a shitty dad Lawler was. Lawler played it just right by keeping his mouth shut and his face solemn, even after Christopher slapped him around some. And then who came to Lawler’s rescue? None other than Good Ol’ JR! Ross came out and tore Cole a new one for being such an unbearable jackass, but then Cole’s personal trainer, the All-American American American Jack Thwagger hit Lawler from behind and went to the ring to slap something that looked suspiciously like an Angle Lock on JR. Where’s the Okie love?
So this was another great bit that moved the story along and raised the stakes, unlike Rock’s stupid skit with some kid in a Cena shirt. Too much more garbage like that and Rocky’s going to be arriving in Atlanta as a heel.
On a related note, I had planned on doing a week of wrestling-related stuff to lead up to ‘Mania; now I’m not so sure that’s going to happen. I’m working on a few articles but just haven’t had the time or inclination to review the things I need to in order to produce the same kind of high-quality factual articles you guys are so used to (yeah, right).
In other rambling news, I picked up Sharktopus on Blu-Ray.
Sharktopus.
On Blu-Ray. 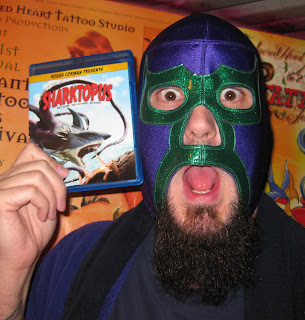 I also have a shitload of new toys coming in this week, which is good because I need some review material. Green Lantern Classics Series 2, King Hiss, Evil Lynn, Vinz Clortho and hopefully some new Star Wars Vintage Collection figures are all in the near future. I’m also working on that review of the Doctor Who movie on DVD. Be patient. It’s taking me a while to watch everything on those discs. I’m hoping to have a comprehensive review of “Trial of A Time Lord” up someday soon, as well. If the lord helps me to weather that damnable Colin Baker.
I watched Ultraviolet again the other night. It was seven bucks on Blu-Ray at CD Warehouse (if you don’t go there you really should). We don’t own this one and I couldn’t very well pass up a movie starring Milla Jovovich in pants that were clearly painted on. I’m proud of myself for sticking to my Blu-Ray rule – I don’t buy stuff I already have unless it has a ton of new features. I’m not going to replace every DVD in my collection. I liked Ultraviolet just as much the second time. It’s awesome visually and the villain is tremendous. It’s also cool seeing William Fichtner play a good guy.
I also picked up Shoot ‘Em Up and Superman II for under ten apiece. I’m telling you, man – CD Warehouse.
Until next time, stay creepy
-Phantom
Posted by Phantom Troublemaker at 1:00:00 PM

Email ThisBlogThis!Share to TwitterShare to FacebookShare to Pinterest
Labels: life the universe and everything, wrestlemania, wrestling commentary