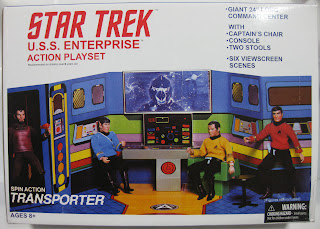 As evidenced by my article last week on the resurgence of Mego-styled toys, I am really into 8” clothed figures at the moment. I’ve got the Venture Bros. releases and the Real Ghostbusters (which are pretty much what sent me over the edge into full-on collecting) and a few other odds and ends. There’s one line that caught my attention when it was first announced but that I never bought anything from - Star Trek.
When I first saw the reproductions in Previews I thought they looked awesome, but I wasn’t in the market for a new line to collect at the time. Every successive release has tempted me, but I knew I would be getting into a whole new world of toys if I got started. I mean, it’s not like you can just buy one member of the crew and call it a day. I almost gave in when Diamond solicited the reproduction of the original Enterprise playset by Mego.
Over the course of writing last Monday’s (hugely popular) article I got myself very excited about things and ended up ordering a bunch of stuff online. It turns out you can find most of the Star Trek reproductions for fifteen bucks or less – an amazing deal when you consider DCUC goes for the same price and MOTUC costs almost thirty after you pay shipping. So I ordered a few of the figures for reasonable prices and have feelers out for the rest. And then, after some exhaustive Googling, I came across the mother lode. A brand-spanking-new Enterprise playset for $24 on Amazon. I ordered it and something else from my wishlist (to get that sweet, sweet free shipping) and it came the other day. Before any of the figures. As you’ll see. 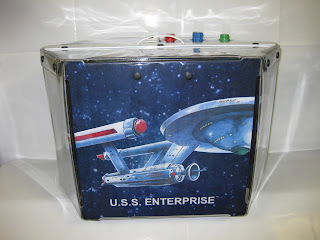 First Glance: What a giant, beautiful box. I can’t believe I got this thing so cheap. Upon opening it, I discovered one of the tabs that holds the parts together had come off, but it snapped back in very easily once I located its place of origin.

Construction: “Sculpt” doesn’t really apply here. The playset comes closed up in its carry-case mode. It has a handle on top and is a surprisingly compact hexagonal shape. With the turn of a simple latch, it opens up into the bridge of the most famous space exploration craft in history.
The actual walls and floor are all vinyl with printed cardboard inserts. The graphics are very simple, but they are colorful and exciting and have the feel of the Enterprise. The designers at Mego chose a pretty ingenious shape for the set. There is a large, central area for the Captain’s chair and main console, a side section where somebody could hang out and look busy and the transporter area with adjoining storage closet. I know “closet” is kind of a lame word for something on board a starship, but I couldn’t come up with a better word.
There is a static-filled viewscreen printed on the cardboard insert at the back of the central area. Just above the screen are two hooks from which you can hang one of six different printed images:

These are very crude, simplistic drawings. They look like they were created by children. For all I know one of the Mego designers actually had his kids do them. That would actually be really cool.
Despite the awesomeness of the multiple screen images, the transporter area is where all the excitement really is. The storage closet next to the transporter is really neat. It’s only a simple panel that requires a fold and then a push into place, but it is just a clever little addition to the set. Plus, the design on the front looks like a jukebox. It makes me thing the Enterprise needs one of those Fonzie figures. The only issue here is that the spot on the cardboard where the panel folds in order to secure the door cracks when you fold it. This is due to the way the original was designed, not because of an error. While I would have liked two separate pieces in order to avoid this, I’m not sure the mechanism would have worked as well if that were the case. The closet itself is large enough to store a couple of figures, the extra view screens, some accessories; just enough space to be useful.
The transporter is awesome. It’s a very clever but simple mechanism and it works exactly like it is supposed to. There is a plastic tube built into the cardboard panels. Inside that tube is another tube with a central knob on top of that section of the playset. The inner tube has two openings to put figures in - one for materializing, one for dematerializing. The green and red buttons on top of the playset next to the knob determine which function the transporter performs. Here’s how it works:
There is a door on the back of this section of the playset so that you can remove dematerialized figures and put materializing figures in. It’s very cool. 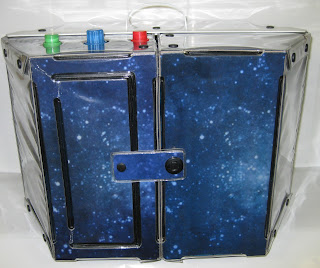 Design: The graphics printed on the cardboard are clean and consistent. The interior graphics have almost zero similarity to anything in the show, but definitely capture the feel of the Enterprise bridge. Honestly, the sight might have been a bit boring to look at if 2-D representations of the show’s sets had been adapted.
The exterior is a neat-looking star field with a beautiful shot of the Enterprise on the front.
Note: I’m no expert, but the only difference between this set and the original from Mego seems to be the Diamond Select Toys logo printed on the exterior. 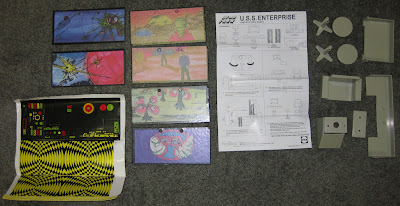 Accessories: Included with the playset are two stools, the main computer console and the Captain’s chair. The pieces are all made of the same gray plastic, which seems sturdier than a lot of the 70’s toys I remember having. I’m not saying you’d want to throw this stuff around or anything, but it didn’t break from the mere pressure of assembly. I clearly remember this being an issue well into the 80’s.
The Captain’s chair is the only thing that really resembles its counterpart from the show, but again; all the pieces capture the spirit of Star Trek.
The Enterprise set also comes with a label sheet with stickers for the console, the Captain’s chair, and the transporter. They are all very simplistic but neat to look at and the transporter graphics are insane. The paper used to make the stickers is exactly like what you remember from the 70’s. It tears easily and you had better by God put the label in the right place the first time or your toy is going to look wrong forever and you are going to be resoundingly mocked by all your friends for your stickering incompetence. Or at least until the stickers invariably fall off. Which they never will with this reissue, since it seems that DST used a superior adhesive. It seems to be a little more solid than the old stuff, which probably caused cancer or typhoid or something anyway. I’ll let you know in ten years if my playset still has stickers. 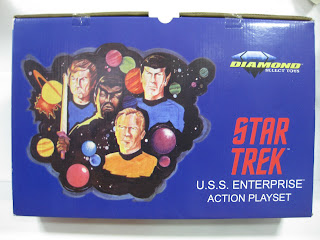 Packaging: Absolutely beautiful retro box. The graphics are that strange, old-school painting. The picture of the playset on the front of the box is typically inaccurate. The painting on the top is awesome. I love the sword the Klingon is wielding. I’m not going to be able to bring myself to throw this box out, despite not having any room for it.

Overall: I love this thing. I can’t honestly say I’d be as thrilled if I had paid the original $60 price for it, but for what I paid I am thrilled. If you can get it for under fifty bucks I’d say you should. It is a wonderful piece of nostalgic magic that makes you really want to sit down with a kid and play with it.
5 out of 5
I don’t know where in the world I’m going to put this thing. It might be time to finally do an overhaul of the Man Room.
On a related note, I know I had one of the Mego playsets like this when I was a kid, but I can’t remember which one. I specifically remember the vinyl tearing at some point. It was definitely smaller than the Enterprise and had a metal version of the latch closure. I believe it, too was a hexagon, but it was smaller at the top than the bottom. I can’t remember what the graphics on it were, but it was a spaceship of some sort. If anybody has any idea what this thing might have been, leave a comment. I’m mystified. 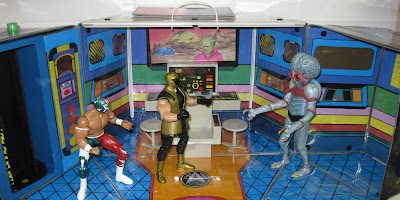