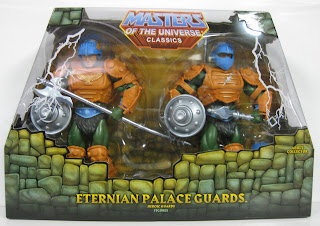 I had been eyeballing these guys for a little while. I was initially happy that they were not going to be part of my subscription, but the more I looked at them – and all the variant-enabling gear they came with – the cooler they seemed. The sale date came and went at Mattycollector.com, and I asked around to get opinions on them. Evil agreed with me and thought they looked cool. Mrs. Troublemaker declared them stupid-looking. As much as she tends to be right (like with that Godawful Superman that is up to $80 on eBay[!] as I type this), I didn’t agree with my wife this time. So I finally broke down one day and ordered them. I didn’t want to decide one day too late that I had to have them and then be forced to wait for the re-issue.
They arrived about a week later and I have to say I’m glad I ordered the guys. Let’s take a closer look… 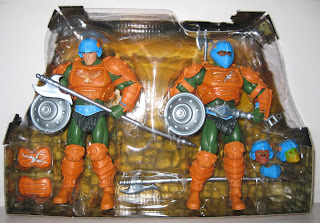 First Glance: They come in a neat little box that does a good job of both making the Guards look huge and showing off the cool stuff they come with. I am immediately relieved that they look cool. 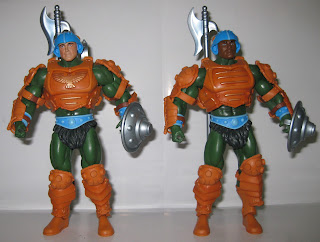 Sculpt: The Palace Guard’s bodies are standard MOTUC human, right down to their tiny, little hands. It’s just He-Man’s body, but green. They are exactly the same, so I’m just going to treat it as one figure.
You’ve got the standard MOTUC articulation, with slightly loose ankles on one of them. Nothing much to say here that hasn’t been said before.
The heads are where we start getting down to business. This set comes with four different heads with non-removeable helmets. The human heads come in Caucasian and African-Eternian(?). They look very nice. I assume they are sculpted to look like Mattel employees because they really have a lot of personality and are not your run-of-the-mill generic troop-builder heads. 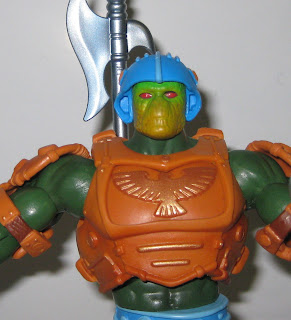 The non-human heads are also pretty neat. I like the reptilian head more than the mammalian head, but they both make nice additions for what could have just been a couple of humans. 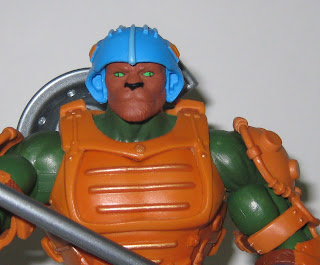 The mammal head is a bit bland, but I guess it would be neat if you’re one of the people who bought Carnivus. I’m not. 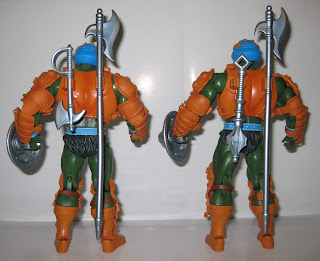 Design: The body is green. The furry loincloth is grey. The boots are brown. There you go.
The heads, again, is where things are interesting. The blue helmets sit on top of some very nice paint jobs. While the non-human mammal is still kind of boring, the lizard looks amazing. All of the scales and his beady, little eyes are brought to life by some fine paint applications.
The human heads both look very good as well, with precise eye placement and nice washes for shading. 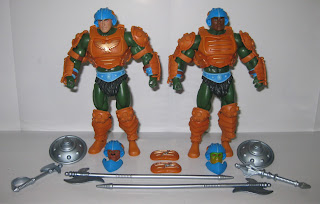 Accessories: And this is where the customization of the Palace Guards really comes into play. The heads are awesome and a great bonus from Mattel, but you could really build a sizeable army of Palace Guard variations simply by switching armor around (and weapons, too if you’ve bought any of the Weapon Racks). Each Guard has a faceplate, chest/backplate, shoulder armor for each arm, forearm armor for each arm and greaves. The chestplates have center pieces that can be swapped with any of the four types that come with the set: Captain, Lieutenant, battle-damaged Lieutenant and even more battle-damaged Lieutenant. The center pieces all have some nice painted detail in addition to being sculpted well enough that they fit right into their slots with no trouble. The chestplate also snaps into the backplate without issue.
The rest of the armor is the orange Man-At-Arms color scheme we all know and love, with those highlights that Mattel is so competent with in this line. Another nice touch is the fact that there are two clips on the backplate to store the Guards’ weapons. You can even fit the shield on there with a little ingenuity – I’m pretty sure that’s a happy coincidence, though.
The only – and I mean only – problem with these guys comes from the greaves. I guess these guys have the same armor as Man-At-Arms, and I guess Man-At-Arms either only has armor on his right leg or has mismatched boots because the left leg armor pieces do not fit these guys at all. If you look underneath, the armor was clearly sculpted to go over a Skeletor-style calf, not a He-Man style one. This results in the armor piece sitting too high and far away from the calf. It isn’t hugely noticeable, but as far as I am concerned it is a big problem. I mean, that’s just a straight-up design flaw.
The set comes with two pikes, a mace and an ax that looks an awful lot like Barbecue’s ax from GI Joe. They are a wonderful silver color that I really wish Mattel had used for some of the previous MOTUC weapons, like the Power Swords. 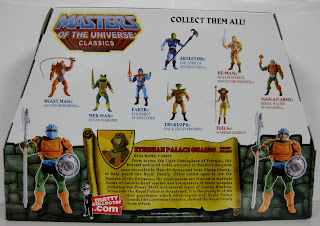 Packaging: Obviously they had to come up with a new box style since this was Matty’s first two-pack. It’s one of the nicer window boxes I’ve seen and has the standard MOTUC material on the back. Lil’ Troublemaker absolutely had to know their names, so going by the back of the package I told him their names were “Varies” and “Spector”, since according to the back of the box “Real Name: Varies” and then later the bio mentions a Lieutenant Spector. 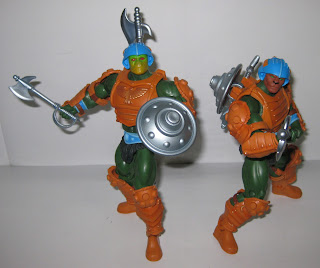 Overall: As you can see in the pictures, the leg armor issue isn’t that big of a deal. It bothers me, but not so much that I’m not kicking myself for not going ahead and ordering another one of these sets while I could. I’d love to have my normal base squad of four of these guys, particularly given the four variant heads you get. I guess I’ll be ordering them whenever they get offered again, likely in June or July. Heck, I’ll probably get a Weapons Rack, too.
3 out of 5
Sold out on Matty, your choices are eBay, BigBad or wait. Whichever you choose, I do recommend these guys.
And now for a very special edition of
Toy Reviews With Mrs. Troublemaker