Toy Review – Masters of the Universe Classics: Vikor (He-Man of the North) By Mattel 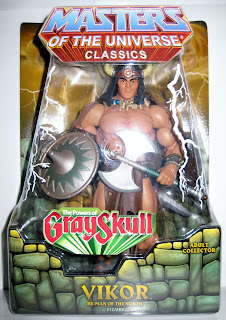 I have to give MattyCollector credit for making their Masters of the Universe Classics subscription service seem worthwhile. I got the notification that Vikor had shipped the Friday before he went on sale, meaning he would have arrived the day after the sale (Wednesday) if not for the lingering effects of Atlanta’s catastrophic snowstorm.
But the biggest benefit as I see it is that I got to avoid the ridiculous ordering process through Digital River’s inferior and broken website, now “improved” by the addition of a Captcha prior to checking out. I don’t know if this helped any; and hopefully I never will. The only time I should have to use the website at all is for re-issues and you can typically wait until after the sale madness is over to order those. They tend to linger for a couple of days.
As for Vikor, he replaced Bow as the January figure. I was incredibly pleased about this because it meant I was getting a figure I was actually excited about to kick off the subscription as opposed to She-Ra’s gay friend. I do have to admit, though; after watching a few episodes of the She-Ra cartoon on Netflix I might be a little more willing to put Bow on my shelf. The guy is kind of awesome. Plus I feel bad for him, what with having to be the sole cocksman amongst a bunch of crazy revolutionary women with super powers. 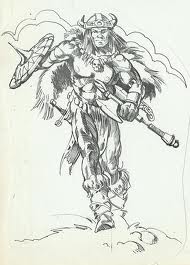 Vikor is exciting because he represents the very first concept of He-Man as presented to the bigwigs at Mattel almost thirty years ago. And he is basically Conan. You can read some commentary about that here if you like. I really dig barbarians and Vikings and the like (which explains how easily I got sucked into the new MOTUC line after ordering Scareglow), so Vikor was a must-have from the start. 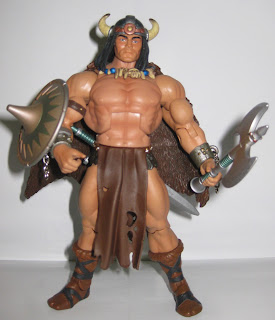 First Glance: Man. Not only is this clearly a Conan figure, it is the best Conan figure I have ever seen. I hate to just dismiss the NECA Schwarzenegger releases that look so amazing, but those are statues. Immobile representations of what should be a whirling dervish of destruction will never win any awards from me. 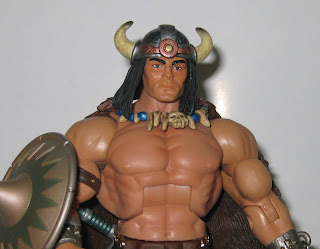 Sculpt: Firstly, this is the best figure I have gotten from Matty as far as the quality of articulation. Grizzlor (link) presented the first real, legit problem I’ve had; but all of the figures have had some sort of minor problem with their joints. Whether they were too loose or had to be worked a bit to move, each one has presented a minor production flaw. Vikor is great. All of his joints are tight and there is no sticking resulting from paint. Hopefully this represents a new standard from Matty for the year (and damn well should for twenty bucks a pop).
Vikor has the standard MOTUC articulation, though his neck joint is rendered somewhat moot by his hair and cloak fastener. That’s okay. I really don’t see a way around the issue that doesn’t involve making the figure significantly less rad. Vikor has new forearms, but everything else – save the head – appears to be borrowed from He-Man. And why not?
Speaking of He-Man, I honestly expected a He-Man face with longer hair, but Matty has seen fit to give us an actual Conan face. It’s grim and angry and looks ready to chop your face off. I was a little disappointed to discover Vikor’s helmet does not come off, but sometimes that’s for the best. I have a lot more removable hats and helmets that look too big and/or lumpy in my collection than ones that fit exactly right and don’t make the figure they are on look stupid. With toys, it seems like removable headwear results in either giant hats or tiny heads. Even Hasbro has only recently gotten it right (and even then not always).
Vikor has a strap on the back of his loincloth to store his sword. He can also hold his weapons in both hands (with a little work). 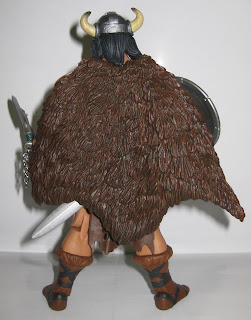 Design: The paint job on Vikor’s body is great. I often forget these guys are detailed so thoroughly until I look at them. All the washes and muscle detail really make these look nice. Their faces are always fantastic, too. Never any off-center irises or eyebrows or anything.
His helmet is awesome. I mean, there’s not much to it – it’s a standard Viking helmet – but it just looks great. The paint on it is a much-needed highlight that tops off an otherwise somewhat drab figure (not that there’s anything wrong with that). 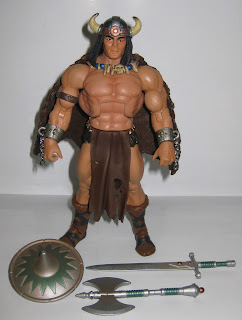 Accessories: Vikor comes packed with a battle ax, a sword, a shield and I guess you could consider his cloak an accessory. If you wanted it off, you could pop Vikor’s head off and remove it. I’m not going to because that process is sometimes more difficult than you think it’s going to be and might result in a loose neck joint. The cloak itself looks good and furry and the fastener is a nicely painted string of beads. This is another of those little details that makes these figures just good enough to justify the price.
Vikor’s arsenal is a unique-looking bunch of tools of death. They look different from all of the other MOTUC weapons, but still fit in. I was happy to see that the He-Man of the North actually has a unique battle ax. I was expecting a repaint of the normal He-Man ax. Same with the shield – this one is a new sculpt. The sword, on the other hand, let me down a bit by being different. Once I read Vikor’s bio I was disappointed that it wasn’t a repaint of the Power Sword (more on that later). Still, it is a great looking sword and matches the rest of his armaments well. The green and silver coloring on them looks very nice and is, again, reminiscent of a lot of Conan art. 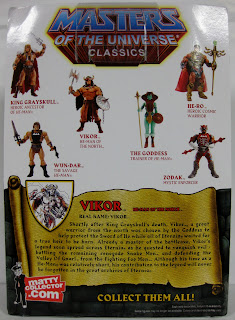 Packaging: The standard Masters of the Universe Classics packaging. It looks nice, makes the figures look even bigger than they are. You also get a bio on the back that is sort of a composite of each character’s history. Vikor’s bio made me realize for the first time that Mattel has a very specific goal of producing the lineage of He-Man and all of the various He-Mans. I didn’t even realize until I looked at Vikor’s cardback that there were various He-Mans. You’ve got He-Ro (He-Man from another world), Wun-Dar ( He-Man of the Savage Wild or the Wonder Bread He-Man), Vikor (He-Man of the North), standard He-Man (Modern Day [?] He-Man) and presumably King Greyskull was a He-Man, too. And then we’ve got Preternia He-Man coming soon as the subscription exclusive for the year, whatever the heck that is. 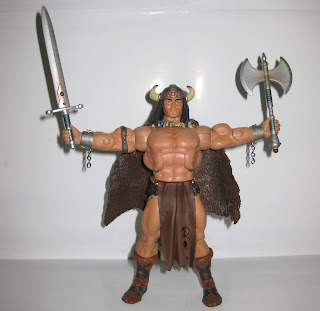 Overall: I love this guy. He looks great with my other barbarians. Buy him.
5 out of 5
As always, you can pay a premium for the big guy on BigBad or eBay; or you can wait for the inevitable reissue. 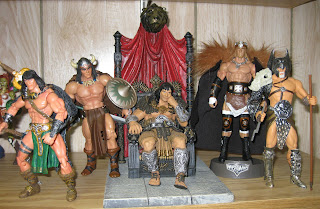