I have done Hasbro a great disservice.
Well, in my mind, anyway. I kind of doubt the execs in Rhode Island are smashing computer monitors because they can’t find coverage of the latest GI Joe line on Needless Things. Still – I feel kind of bad about it.
Pursuit of Cobra is the follow-up to the GI Joe: Rise of Cobra movie line and it is easily the highest quality series of action figures that came out last year. The vehicles were not quite as impressive, and those stupid mechs (okay, they’re not exactly stupid – they’re actually pretty awesome – they just don’t belong in the GI Joe line) were a mistake from the start; but the figures themselves are the absolute best 3 ¾” scale offerings I have ever seen.
Hasbro is in a very tough spot right now with the GI Joe line. Retailers were sick of Rise of Cobra by the time that line stopped shipping and so were customers. It was a great line, but there were a finite number of concepts to be produced based on what we saw in the movie. Hasbro had to come up with something to keep the line going, but with no new media to draw from they were on their own for new material. Should they return to the comics/TV-inspired 25th Anniversary style? Should they change the style of the line entirely and produce figures based on the look of the new Renegades cartoon; a decision that has never worked well in the past (Extreme, Sgt. Savage, Sigma Six)? 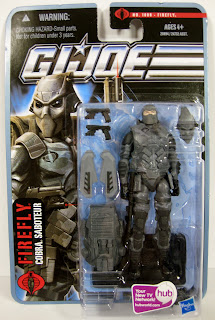 What Hasbro decided was to bridge the gap between the old material and the new; and to produce figures that were so high quality consumers wouldn’t care how many times they had bought certain characters or what continuity they came from. That seems to be exactly what Pursuit of Cobra is.
If you follow Needless Things you might be wondering why I gave Best Toy Line of 2010 to Star Wars if the new Joe line is so great. The aforementioned lackluster vehicles are part of the reason, another part is that so few figures were actually released and I didn’t even buy a whole lot of those. There are only so many Duke, Snake-Eyes and Destro figures one man needs to own. I’ve pretty much put a moratorium on those characters unless something absolutely stunning comes out (and in the case of one of those, it did).
So I bought a few of the new figures when I saw them at Target a few months ago, bought them, was amazed and then for some reason never mentioned them here or on Facebook. I can’t really explain it other than to say that they were so unbelievably good I just didn’t want to try and review them. I often have difficulty trying to write up things that require me to say “awesome” over and over again. You wouldn’t believe how many reviews I have filed away that will never be posted because I felt they were just gushing too much. That gets boring. 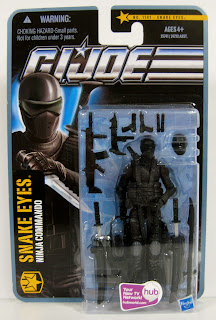 But sometime last month, our friends over at Veidt.com put up a post mentioning the newest Pursuit of Cobra Snake-Eyes figure. This is the third (!) Snake-Eyes in the new line. On the way to rolling my eyes at this ridiculous excess of one character, I noticed that in the picture Veidt had posted the figure looked pretty cool – that blister card was packed with accessories. I read the accompanying blurb that claimed that this version was the definitive Snake-Eyes. Sherry at Veidt has generally solid taste in toys, so I decided I would pick one up when I saw it. I did, and you got the other day’s review as a result, as well as this article. The Pursuit of Cobra figures are just too fucking awesome to overlook any longer.

So, over the next couple of weeks I am going to post reviews of each figure I have bought. I still don’t need any more Dukes, but the sheer awesomeness of the figures I have bought has compelled me to pick up a few that I might otherwise have skipped. I’ll tell you right now that you’re getting ready to see a whole lot of “5 out of 5’s”, but trust me – this line has earned it. If Hasbro can get their shit together and put out some non-stupid vehicles (which may be right around the corner with the new VAMP and a couple of other promising releases), Pursuit of Cobra could well keep the line going the rest of this year until the awesome stuff we saw at Toy Fair is released.