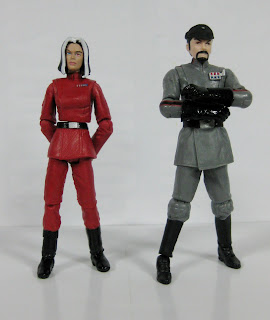 For several years Hasbro’s Star Wars comic packs were bringing us some of the greatest and most obscure characters that the Expanded Universe had to offer. Initially costing $9.99 for two figures and a reprint of the comic they were featured in, they were not only a deal but a breath of fresh air for those tired of interminable re-releases of Darth Vader with different types of forearm articulation or Luke Skywalker with or without a shirt. Granted, we got Darths and Lukes aplenty from the comic packs; but in garish, comic-inspired colors or odd costumes seen only in the funnybooks or novels. From Quarren pilots to information brokers to a much-needed update to a mafia boss; the comic packs were often must-haves throughout their run.
But then a number of factors led to the death of the novel item. Prices went up, distribution got spotty and Hasbro apparently decided that every pack needed to feature a top-tier character. This last one led to a lot of crappy repaints of inferior figures that nobody wanted. So the comic packs sat on shelves. Wal-Mart carried a few exclusive sets, but these fared no better than the mass-market releases and suffered from even worse distribution.
And so the line died, with one last – some would say best – series left unreleased. Thankfully, the good folks at Entertainment Earth decided to save us all and make that last series of comic packs one (well, four) of their exclusive offerings for 2010.
I’m not one of those who say this is the best of the comic pack series, but it is pretty darned good. With five must-have figures out of eight (and four of those in two of the packs – think about it, I might have had to buy all four packs to get five figures) that’s a better score than a lot of the series.
The Entertainment Earth Exclusives consisted of four sets: Baron Soontir Fel & Ysaane Isard, Jaster Mereel & Montross, Deliah Blue & Darth Nihl and two characters from the Knights of the Old Republic video game. If you haven’t guessed, the latter is the one I skipped. I don’t know what it is about the pre-Clone Wars stuff, but I just can’t be bothered with it.
Today we’re going to take a look at Fel and Isard, who both played large parts in the excellent Rogue Squadron books and comic books and are therefore favorites of mine. Baron Soontir Fel is an Imperial pilot who defects to the Rebellion and then back and then to the Chiss. Ysanne Isard is a head of Imperial Inteeligence who goes on to become one of the biggest threats the New Republic has to face.

First Glance: Fel’s face looks quite a bit different from his previous comic pack release, in a good way. Isard looks great. Her uniform is a vibrant red and her head looks spot-on. 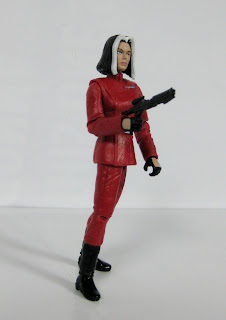 Sculpt: Isard appears to use the same female Imperial officer body as the first Juno Eclipse figure. That’s just fine – it’s a great mold and there are enough color differences that you could stand them side-by-side and not think anything of it. I’m not crazy about the gloved hands, but they’re acceptable. Her head is outstanding. The face looks just like what we’ve seen in the comics and the hair falls perfectly. The problem with this figure wasn't apparent until I started taking pictures. For some reason, the waist joint doesn't line up right. With a little adjustment it isn't as apparent as it is in the pictures, but it's still an issue.
(you can see it better in the close-up picture) 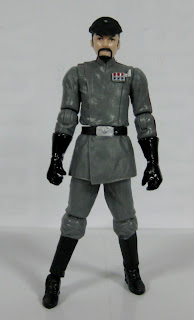 I don’t know what body Baron Fel has. He has better articulation than a lot of my Imps, but one glaring problem. His right foot appears to have been tooled incorrectly and not only looks crappy and weird but makes it difficult for him to stand. This isn’t an issue like Starfire’s (or countless other 6” figures) where you can run some hot water over it and fix it. This thing is genuinely fucked up. He can stand, but he looks goofy. In addition to his gimpy foot, he also has a strange, spread-legged stance that looks not at all natural. His head is awesome, though. Not necessarily because it matches his comics appearances, but because it was clearly sculpted to look like Timothy Omundson, specifically Omundson as he appeared on the awesome show Human Target: 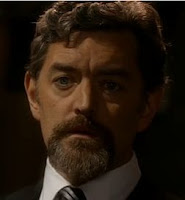 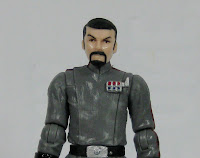 I wish I could swap this head with the other Fel figure in his flight suit, but they aren’t compatible. Not easily enough for me to mess with it, anyway. 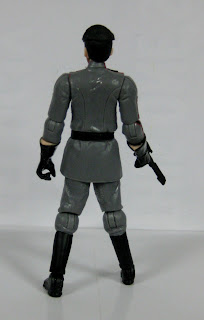 Design: Not much to say about Fel. He has black hair and a gray Imperial uniform. The detailing on his rank badges is nice. There is one problem here, as well. Fel’s gloves were molded out of Caucasian colored plastic and then painted glossy black. Well, mostly painted. The tops of his gloves didn’t get covered, so it looks like he has some kind of grotesque flesh mittens on. You can cover it up with a sharpie; but c’mon, Hasbro. Stop making me finish your figures. 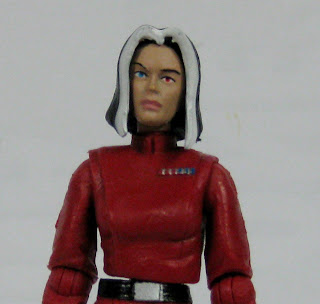 Isard is near perfect design-wise. The white in her hair is placed perfectly and there is no bleeding. Her eyes look great, and they would have been an easy thing to screw up. Getting a tiny detail like different-colored eyes to look right must have been tricky. Her uniform is a brilliant shade of red that stands out wonderfully amongst the rest of my drab Imperials (which was the point in the story). The details such as her rank badges and boots all look nice. 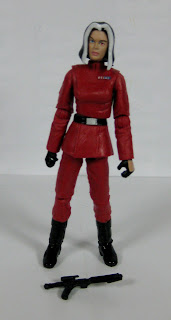 Accessories: The set comes with two BlasTech E-11 rifles. I understand this being the go-to accessory for Imperials who may not necessarily need other accessories, but I would have preferred a small holdout blaster that maybe fit into a holster at the back of Isard’s waist. Or no weapons would have been fine. Lord knows I don’t need any more E-11s. 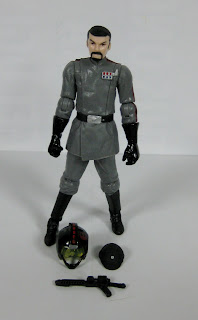 You also get Fel’s Imperial cap and pilot’s helmet. At first I wasn’t crazy about the helmet because it clearly isn’t a TIE pilot’s helmet, but then I realized it is actually an X-Wing helmet painted black with a red Alliance crest. Fel probably isn’t going to be flying in his Imperial grays, but the helmet is a nice addition. 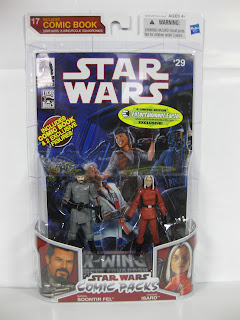 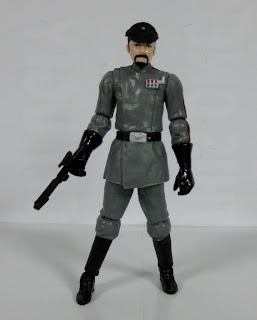 Overall: Isard is great and a character I have been waiting to see in figure form for years. While I am a big fan of Soontir Fel and his story, I’m not sure this figure was necessary. I’m thrilled with the head sculpt, but it’s a shame it has to sit on top of such a weird body.
4 out of 5
This is one fo those sets that people are going to buy because of the characters, not the execution. This is the only Ysanne Isard we’re ever going to get, so if you’re a fan of the Rogue Squadron EU stuff, you’re going to get it. And thankfully, her figure and Fel’s head and helmet carry the set well enough to be worth buying.
Until next time, stay creepy
-Phantom
Posted by Phantom Troublemaker at 1:00:00 PM